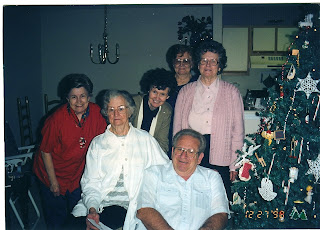 Mother put this story to paper in May, 2003. Two months later she would take a severe turn and would enter a nursing home. While my sister and I had heard numerous stories of Mother’s days growing up in Canton, Georgia this is a particular story I had not heard before and kept it in a special place. I knew that I wanted to share it with Mother’s family at some point.

I really don’t know how I did it but I managed to read it aloud at Mother’s funeral. All of her sister/aunts were there except for Aunt Dee, the oldest. She had paved the way for Mother and had already arrived in Heaven.


The picture I have here is one of the last times Mom was able to be with all of the sisters Mom is in the red shirt, and right next to her is Aunt Dee. Aunt Nelle is next learning down, and in the back is Aunt Blanche while Aunt Claudine is wearing the pink jacket. The gentleman is their cousin.


Mother’s family is a classic southern family in that things are little mixed up....the result of a father and son marrying half-sisters. So, the aunts were really aunts but they were more my mother’s age than my grandfather’s. While Mom was very young they were aunts and as she got older she referred to them as sisters. They were all very special to Mother and they are very special to Dear Sister and I as well.


Today is Mother’s birthday. It is very hard not to have her here to celebrate with. Publishing her story here at History Is Elementary is the best I can do to fully remember her wonderful ability to share her memories. Here is my Mother’s story in her words:

The same four aunts who had entertained me as a small child when I ‘d visit their home we all lovingly called “The Homeplace” were now all entertaining me once again, but in a different way. Once a year they all four went into the city of Atlanta to shop, and they had invited me to go with them. 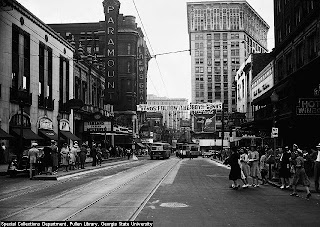 money a jillion times----just hoping I’d have enough for all the ‘treasures’ I hoped to find. After a big breakfast, we’d all stand down on the main road waiting for the big “Smokey Mountain Trailways” bus we all rode so much since we didn’t have a car. My heart was beating a mile a minute as we saw Mr. Honney, the bus driver, coming around the curve and down to where we were waiting. Finally, he stopped, and we filed onto the bus one at a time, each of us giving Mr Honney a “Good Morning!” and a “How ya’ doing?” since he seemed like family to us.
We went on back to our seats that were covered in a velvet-like material all in red. I made sure I got by the window so I could see the old four-lane highway rolling by us as we went south towards Atlanta. The traffic was nothing like it is today some seventy years later.


Finally, we pulled into the bus station, home to many different buses with different places to go. We went inside the building where the waiting areas were and where we could borrow their bathrooms before starting our journey up Peachtree Street where all the best shops and shoe stores were located. My Aunt Dee, my oldest aunt, would always lean down and softly say to me, “Don’t sit down, and be sure to wash your hands when you finish.” Then she would drop a dime into the slot and the stall door would open.


When walking through the waiting area to get back outside we saw mamas and daddies and lots of soldier boys all seated on wooden benches and scattered all over the place. Some seemed to be on their way home and some probably going to God knows where. Everyone seemed on schedule as the loud speaker would say something and groups here and there would begin to move. 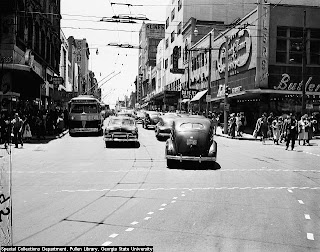 The aunts hurried me outside and we crossed first one street and then another before getting on the right side where there was a cement walkway all the way down in front of all these different shops. The blouse shop was a favorite, and so were a couple of shoe stores including Butlers and Bakers. It was at Bakers that I chose a pair of brown loafers with a space under the tongue up front where you put a shiney copper penney for decoration as my first purchase of the day. From there we continued walking happily down the street.


Aunt Dee found the long black coat she hoped she would and got it at a nice dress and coat shop. By now Aunt Blanche had found a real pretty green dress, and like me Aunt Nelle had bought shoes, BUT Aunt Claudine hadn’t found her treasure yet. The day was young, however, and she was bound to find it later. 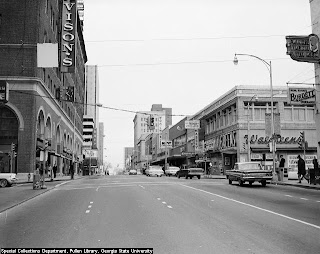 By now everyone was beginning to get hungry so we took a vote and decided to eat at the five and ten cent store called Woolworths where they had a really nice place to eat. Later we could browse around the store and look for more treasures. The five of us would almost fall into the booth with all of our purchases, leaving them all in on booth, and us sitting together in the next one, with somebody at the end and seated in a chair.


We often ordered their really good chicken and dressing that came with mashed potatoes and gravy, green beans, cranberry sauce, a big, fat yeast roll with butter, and the best sweetened ice tea with a wedge of lemon stuck on the glass, OR we would order the big hamburger with all the trimmings like lettuce, tomato, and onion with a big handful of potato chips and pickle on the side. Forget about dessert…we’d have no room, but later on we might stop on the way back for an ice cream half-way up the street at a little honest-to-goodness little ice cream shop with tables covered with red and white checkered tablecloths and painted white chairs. The only problem was making up our minds regarding the flavor we wanted because there were several available. I always settled for choclate while Aunt Dee usually chose peach. Blanch, Claudine and Nelle always chose strawberry which looked quite tasty too.

Before we left Woolworths we always looked around for a bargain and I would always give the post card rack a turn or two. I’d stop at one of a pretty Atlanta mansion with different flowers out front, and choose one for Mama. Since Daddy was a big fan of the Atlanta Crackers, I would get him a card with a baseball player on the front.


I enjoyed reading comic books and for a dime I picked up an issue of Archie with a picture of him and his girlfriend, Veronica, on the front. I usually picked up the latest issue of Andy ( the Panda) too.

Walking back up the street we shopped some more and revisited a shop where I had picked out a baby blue sweater set earlier, and here Aunt Claudine finally found her treasure. She bought a pretty solid green slip-over with a floral sweater to match. Later my mom said I had made a wise choice with my sweater purchase and I wore it many times. Aunt Claudine wore hers as well.

We were all so tired out when we finally got back to the bus station and boarded the big old bus. We’d be very quiet all the way back up the old four-lane that led us out of Atlanta, through Canton, and to the outskirts of town. We all usually went to sleep just about the whole way home.

All those shopping trips with my aunts were so much fun, and gave me a lifetime filled with precious memories with them treating me like the little sister back then, and they still do, but I tell them I am catching up and in a hurry since I am now 70.


My life has been so blessed and filled with so much love from these ‘young’ ladies.

How courageous to read this at your mother's funeral. I'm sorry she passed away, but she has left you something to valuable. Not many get the opportunity to see life through their mother's eyes.

Wow! I went back and read all from the past few days about your mother. How wonderful that she kept the notebooks with so many details. How you must treasure them!

Thanks for stopping by ~ it is always appreciated. I see where you got your talent for writing! This is what history is about, every day people! Us!

On Wednesdays I have choir practice and yesterday was no exception. Why am I telling you this, you may ask? One of the hymms rehearsed was: "We Will Rise Again" ~ the one that I quoted to you last July when your Mom went home to the Lord. Methinks she had a hand in that and I remembered to pray for her and you as well.

What a beautiful story. I would have loved to have sat at her feet to hear her tales. As long as you have her stories, your mom "lives on." Thanks for sharing her with us.

Now we know where you get your talent from!