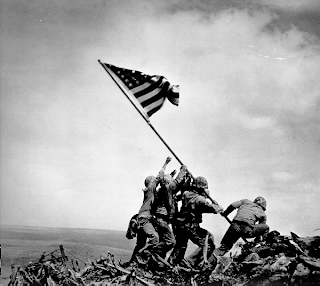 This image has the reputation of being the most reproduced image of all time, and most people simply refer to it as Iwo Jima. The image depicts U.S. Marines raising the American flag at the summit of Mt. Suribachi on the island of Iwo Jima during World War II

Does this image portray America as a great nation? Why or why not?

Thanks for the back story! The monument in DC is very powerful, too. Well done and passionate and sensitive. What a moment.

Today was the day to vote in our state... your picture is so patriotic and perfect.

'Teamwork and hard work are the elements needed for victory' is the theme of my talks here. This is one of the most impressive sites in the world to me and I am pleased it is in my backyard.

I did write about the 'myth of the hands' in a previous post, you might find that interesting.

That is a powerful moment!

If you are interested in learning about or teaching History, you will want to read this blog, Protest Literature from Tom Paine to Tupac in the blogs section of this site: TheFinalClub.org


The site includes lecture-by-lecture blogs of Harvard courses written by Harvard students for a general audience. One of the best and most relevant for this discussion thread is Protest Literature from Tom Paine to Tupac.


On the site you can also read the complete text of many classic works of literature with interesting, relevant, and engaging commentary. There is already a good amount of commentary on texts such as The Federalist Paper, The Constitution, The Declaration of Independence, The Communist Manifesto, and much more.

Check it out, there is some other really great stuff on the site as well: