In an October, 2008 online article at the site for a South Carolina news station, USC economist Dr. Bill Hauk states, “There are enough similarities [between the current economic crisis and the Great Depression] to say there’s definitely something wrong here. We definitely do need to be concerned. I think the comparisons to the Great Depression are certainly premature and hopefully unneeded.”

I agree with him to a point. The current situation is exactly that…current. We are living through a huge historical event that others in the future will analyze and judge. It’s too early to look at the situation clearly, yet that is our nature, isn’t it?

As a teacher of history I’m anxious to get my facts NOW, so when little John or Jane asks why did my dad lose his job, how did this all happen, or why does my mom yells at the television and throws things every time Obama’s face shows up on the screen I can give a proper answer. 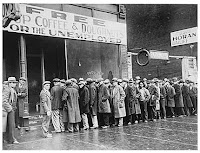 Yet, we must realize the situation is still fluid, and we certainly don’t know the whole story regarding how all of the dominos have fallen or in some cases been pushed. While I want to agree with Dr. Hauk and state I don’t think today’s situation is greater than the problems our nation experienced in the 1930s especially listening to some of the folks including my parents who lived through the events I honestly have to say I don’t know…because this historical chapter is still in play.

Dr. Krassimir Petrov, a professor of Macroeconomics, International Finance, and Economics at the American University in Bulgaria, wrote a great article at The Market Oracle in November, 2008. He states, “At its core, environment of the 1990s, and the response of the Fed to the tech-telecom bust has created an economic environment that has encouraged the repetition of the very same mistakes that led to the Great Depression.”

Dr. Petrov then lists several obvious parallels to the current crisis that include:

*Securitization…Although not in the very “ultra-modernistic” form and shape of the 2000s, with slicing and dicing of pools and tranches of seniority, it was widely recognized in the 1930s that securitization during the 20s drove the domino effect in the U.S. financial system during the Great Depression.

*Corrupt Gatekeepers…accounting firms aided and abetted the Environs and Worldcoms and in the current crisis we are seeing the same thing (see the most recent report from ABC's Brian Ross) and following the Depression the SEC was created due to the corruptness in the 1920s.

*Financial Engineering…We are led to believe that financial engineering is a rather recent phenomenon that flourished during the New Age Finance Era of the last 15 years, yet financial engineering was prevalent in the 1920s with very clear goals: (1) to evade restrictive regulations, (2) to increase leverage, and (3) to remove liabilities from the books, all too familiar to all of us today.

*Lagging Regulations…Understandably, regulations should have forseen today’s financial problems and should have been introduced before the crisis.

*Market Ideology…Laissez-Faire reigns, but we need to remember the money markets are not really free

*Non-Transparency…Originally, lack of transparency was designed to fool the markets; ironically, modern-day financial executives have gotten to the point of fooling themselves.

But then Dr. Petrov takes a turn and states the current mess will be judged greater than the Great Depression. I wonder what moniker history will finally give this time period….the Great, Great Depression? The Greater Depression?

Here are Dr. Petrov’s six reasons why this period will be judged greater:

*Total U.S. credit – Credit makes leverage…the more credit in the market, the more leveraged it is

*Dow-Gold ratio…[This] ratio represents the most important ratio between the relative pieces of financial assets and real assets…When leverage in the financial system increases significantly, so does the ratio. When leverage increases, so does the ratio. A high ratio is interpreted as an imbalance between financial and real assets – financial assets are grossly overvalued, while real assets are grossly undervalued. It implies a correction eventually will be necessary – either through deflation, deleveraging and a collapsing stock market, or through inflation, which implies stagnant market for many years and steadily rising prices of real assets, commodities, and gold, usually associated with stagnant economy and typically resulting in stagflation. Deflation occurred during the 1930s while stagflation occurred during the 1970s.

*Global Bubbles…It is impossible to make direct comparison with the 1920s, but today the global economy is rife with bubbles. Back then in the 1920s, the U.S. had its stock and real estate bubbles, while the European communities were struggling to rebuild from the devastations of WWI that ended in 1919.

*Collapsing Bretton Woods II …The global monetary system was on a quasi-gold standard during the 1920s….While the media describes the problem as one of illiquidity and confidence, a more serious analysis indicates that boom-time credit has been employed unproductively and so losses must be incurred. In other words, scare capital has been misallocated, poorly invested, and effectively wasted. No amount of money or fiscal policy can fix the errors of the past, just like no modern treatment can quickly restore to health a drug addict debilitated from a decade-long drug abuse.

If Dr. Petrov is correct even harder times are coming. Harder times regarding life choices and harder times in trying to figure out how to teach this mess because for every economist like Dr. Petrovthat argues we are entering a period worse than the Great Depression there are just as many stating we are just in a slump and no comparison can be made.

For me….for now...the jury is still out.

Interesting post.
I believe we are in two different periods of history that can not be compared, because the wealth of nations and of people is different. It's true that the economic period of today are shorter than before. Thank you. Rino.

I'm glad I'm enrolled in graduate school at American Sentinel University- never been a cheaper time to earn a degree than during a GREATER Depression, right?

Hopefully it doesn't get as bad as many people have proposed, though personally, I think we're far from finding the bottom. I'll be finishing my studies just in time to take advantage of the eventual turn-around though, thank God!

Why is it that they all seem to ignore the Jimmy Carter era when it comes to talking about economic downturns? I talk to my younger co-teachers and they know absolutely nothing about the economic problems of the 1970's. They are always surprised to find out that there actually was inflation and recession during that time frame.

Thanks for your comments everyone...

Mrs. Bluebird, you are absolutely right! Perhaps I need to investigate that aspect of Carter's presidency a bit further myself for an "American Presidents" post.