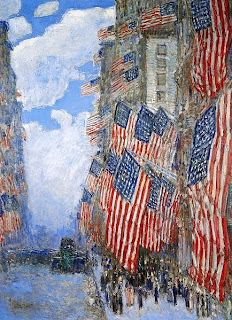 Here are some of the other paintings in the series…a series of thirty paintings…and more information regarding this interesting artist. 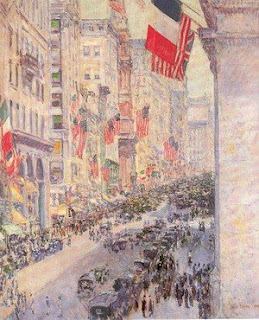 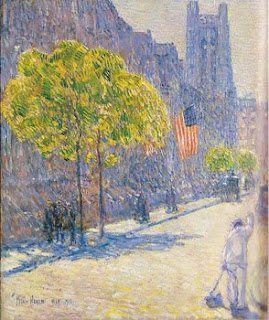 Hassam became interested in expressing his patriotism for the United States during the days leading up to our involvement in World War I. Patriotic paintings were used to counter the isolationist point of view expressed by President Woodrow Wilson and others prior to 1917. In fact, at one point Hassam wanted to go to Europe and paint scenes from the battlefront, but the U.S. government would not approve the trip. At one point he was arrested for sketching naval maneuvers along a river…..

Many of the flag pictures were donated for the war effort. Hassam accepted Liberty Bonds for payment regarding one of the paintings. Hassam’s goal was for the entire series to be sold as a war memorial, however the paintings were eventually sold individually after several group exhibitions. 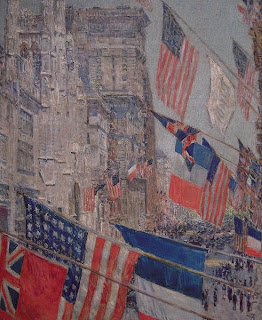 More of the paintings can be seen at this link. 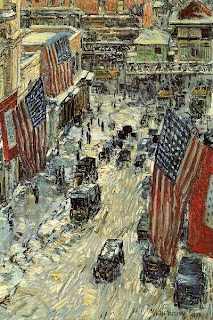 One of Hassam's best known works in the flag series, Avenue in the Rain, remains part of the White House collection. I've posted it over at American Presidents Blog here.

This made me smile! Some time back, I had listed thirteen American paintings that I love (although mistakenly it is posted as eight - http://tourmarm.blogspot.com/search/label/American%20Paintings.

One of them is a Childe Hassam which holds a special place in my life; the painting entitled, Allies Day, May 1917, includes St. Thomas Episcopal Church on 5th Avenue and 53rd St. It's where I was confirmed and married!

Happily, I can visit the painting often as it is hanging in the National Gallery of Art in Washington, DC.

I might put the visit on next year's Fourth of July agenda; I start at the National Archives and end up at the White House Ellipse for the fireworks!

Thank you for sharing -

The Tower of AION said...

The Tower of AION

I immediately noticed that one of these paintings was included in a grant package the media specialist recieved at our school. The grant was called "Picturing America" and included paintings by American artists and historical photographs. Upon recieving this we collaborated for an art/technology lesson based on a painting by George Catlin. Afterward we planned a field trip to the Renwick Gallery in Washington, DC for a tour called Catlin's Quest. This was all done at the same time the 5th graders were studying Native Americans in social studies. It was by far the best field trip I had ever planned. Your blog seems to have a fair amount of art related content. Have you planned or worked with art teachers in your district? I would be interested in hearing ideas or collaborating in a history/art history lesson of some sort. If you'd like, I can send you my Catlin info an a link to the Picturing America website. Thanks!