The Constitution: A Living Breathing Document 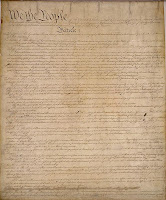 This post first appeared here at History Is Elementary in June, 2006. I’m currently attending a seminar on educational law, so it seems appropriate to re-run this today.

Some Americans are going to engage in behaviors that others will have a problem with . Does this mean we are going to propose amendments for what some perceive to be bad choices and bad behavior? If this is allowed I'm afraid we will be opening doors that will be very hard to close in the future.
Posted by EHT at Friday, June 18, 2010

I too love the Constitution. I get overly excited when I get to teach it to my high school students.

I agree with you completely that a proposed Constitutional amendment should never be used to serve as a smokescreen for Congress. It is not the responsibility of government to govern the morality of the people. Bad choices for some are not necessarily bad choices for all. Constitutional amendments should not address what some perceive to be bad choices. After all, didn't we attempt that with the eighteenth amendment? And we all know what happened then!

Another great post, I always enjoy (and learn from) your blog. Thank you!

Nice article and is inspiring

I wrote a two-part chant about the bill of rights of the Constitution. It's appropriate to 4th grade both musically and academically. Let me know if you want a copy and where to post it. I may not get back to my classroom until August, but I think you and your music teacher would like it. Let me know if you'd like it.

I really wish you taught at the elementary school that my son is going to attend. :)

The constitution is something I get to discuss in World History (to sophomores) and enjoy the roots our founders had in the liberalism and enlightenment principles. Isn't it amazing how it has held up all these years?

Yet I also teach my students about the Roman Empire, which lasted much longer than our Constitution has (so far). I love the question, "Will our country ever fall like the Roman Empire?" It really makes them think and I love their debate about it in class. The constitution is always used as evidence of our continued existence.