Giving a Nudge to Vargas and his Nose-Art

Cute Young Man approached my desk rather gingerly because he knew he shouldn’t be up.
First, since it was our “silence is golden” time – that time I allotted on the plan book during the week for students to read aloud anything they wanted to from my classroom library, so he shouldn’t have been out of his seat since I had already given everyone a chance to choose their reading material, and we had already rotated through the restrooms.


Secondly, since I read something during this time as well……I really didn’t like being interrupted.

Cute Young Man whispered, “Elementaryhistoryteacher, I need to ask you something.”

Hmmm….that was obvious since he was standing beside me during “silence is golden” time, but I decided not to mention that and said, “What do you need, Cute Young Man?”

He had a book in his hand….not one of mine, but it didn’t matter.   Students could bring items from home to read.   The important thing was that my students  were reading, and they were silent.

The book appeared to be an older edition of something dealing with World War II.  Cute Young Boy put the book up on my desk and said, “Look at this…..”

I quickly scanned both pages containing all sorts of images, and then I zeroed in on what he wanted me to see. 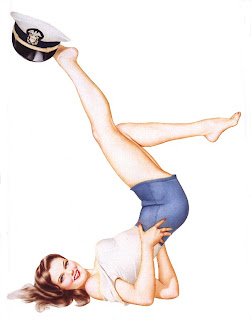 And there were a few planes with the same type of artwork on the nose area like this: 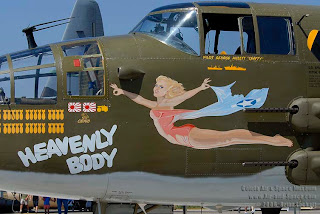 I explained to Cute Young Man best as I could what he was looking at with the most PG explanation I could find.     More than likely at his age he had already seen an issue of Playboy or Penthouse……..but I certainly wasn’t going there at all.

Many bombers and fighter planes with the United States Army Air Force were painted with ‘nose art” or mascots during World War II.   It was unofficially permitted since many of the drawings depicted women who were barely clothed or entirely naked.   The "brass" pretended to look the other way in most cases.

Many of the drawings were done by crew members themselves or copied from men’s magazines.  Actresses, girl friends, etc. were used for models.

Calling these women depicted on the planes as mascots may seem a little demeaning today…..feminist groups during the Gulf War had such drawings banned….., but during World War II, the drawings were considered lucky charms, and as the war wore on many crews had little rituals and procedures they went through during each mission to ensure they made it back to base safely.  They considered the ‘nose art’ on their plane to be part of their “luck”.

The drawings in the two pictures I’ve provided above are both by Alberto Vargas.    During the war he was already known as a successful magazine and poster artist.   As far back as the 1930s he had made a name for himself creating pastel portraits of many famous Hollywood stars.

Vargas eventually signed a contract with Esquire magazine where he produced a monthly pinup in 1940, however, his contract with the magazine required he drop the final “s” on his name, so his artwork can be found under the name Varga, too.     During the course of the war through 1945 Vargas produced a pinup each month.  The artwork ended up in the hands of millions of servicemen who received the magazine for free.

Many servicemen wrote Vargas asking him to produce ‘nose art’ for their planes.   He rarely turned the men down.

Today, the The Spencer Museum of Art houses almost the entire body of graphic art produced by Vargas for Esquire.

You can find more images of ‘nose art’ and how these images are trying to be saved here at  Save the Girls, however…..and I should not have to say this, but I will…..I would not share these images or Vargas’ artwork with my young students.