Marcus Garvey and the UNIA 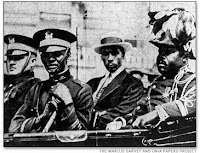 I’ve not met a student yet who can’t identify Dr. Martin Luther King, Jr. by sight. They can usually give me some sort of idea why he is remembered as well. True, some students are under the mistaken notice that Dr. King freed the slaves, but after we take a quick sidetrack into a description of the highlights from Reconstruction, the 13th through 15th amendments, Jim Crow, and the rise of the Civil Rights movement along a hastily drawn timeline young minds are straightened out.

This week’s wordless image depicted a forerunner to Dr. King by several years…Marcus Garvey. Gold stars are due Matt from Tomorrow's History and The Tour Marm who correctly identified Mr. Garvey.

Click over and look at the image. Mr. Garvey is on the right. The man in the middle is Prince Kojo Tavalou-Houenou of Dahomey and the man on the left is George O. Marke, the deputy supreme potentate of the UNIA, also known as the the Universal Negro Improvement Association. They sure do look dapper, don’t they?

Sandy Carlson made a great observation in my wordless comments regarding how the men are standing apart. Notice they are not touching in any way. I’m not sure if this holds any significance for the time period, but if the picture was taken today we might see these young men standing in a much more casual pose with their arms around each other.

Tour Marm commented on the wordless image that she remembered learning about Marcus Garvey in the fourth grade, however, I don’t believe I have ever studied Mr. Garvey in elementary, middle, or high school. I don’t think he was ever brought up in my college studies either.

When I checked various sources in my personal library the only reference I found for him was in War, Peace, and All That Jazz

….one of the volumes from the Joy Hakim series. Basically the mention he got was a sidebar caption along with a picture. But what an interesting character….look at the picture I’ve posted here. This is the same one used in Joy Hakim’s book.

How intriguing? What student wouldn’t want to know more about the guy in the Captain Crunch hat?

Marcus Garvey was born in Jamaica. Today many associate Garvey with Garveyism or Pan-Africanism. Garvey advocated for people with African ancestry to reclaim Africa and for Europeans to leave Africa. He also felt the way to improve the situation for blacks were to unite them into one voice.

He founded the UNIA in August, 1914 with the original purpose to educate blacks and provide them with economic opportunities. The organization began in Jamaica, but didn’t see any real growth until Garvey relocated to New York City. UNIA events included debates, fashion shows, classical music, plays, and vaudeville. These were events that had been unavailable to blacks in all areas of the United States. The UNIA events were meant to provide a sense of belonging and lift up black society. In this regard the UNIA was very successful.

The Black Star Line of Delaware was begun by members of the UNIA with Garvey serving as its president. The company served as a shipping line for goods and it was hoped ships would eventually transport Americans of African descent back to the African continent. There were problems from the start, however, as the ships that were puchased had been passed from owner to owner many times. They were in very poor condition.

Another business venture, The Negro Factories Corporation, called for the creation of an infastructure to manufacture many different types of products. Other Garvey businesses included a chain of restaurants, grocery stores, laundries, a hotel, and a printing press.
During the 1920s the UNIA had twenty million members worldwide, and many were American citizens. Even so, however, many blacks disagreed with Garvey’s strategies and made their disapproval known. One such black leader was W.E.B. DuBois. In reaction Garvey called DuBois predjudiced mainly because Garvey had darker skin that DuBois. It goes without saying that the UNIA did not mesh well with the NAACP. Later Garvey would accuse DuBois of having a direct hand in his deportation. Many black leaders were involved in the "Garvey must go" campaign.

A young J. Edgar Hoover was comissioned with the job of gathering information concerning an element of what was then perceived to a growing radicalism. Hoover referred to Garvey as “a notorious Negro agitator”. To some in American the UNIA was a group that was growing in strength and threatened what many Americans considered to be their way of life. During the 1920s the UNIA had twenty million members worldwide, and many were American citizens. Hoover work for the Bureau of Investigation or B.O.I., which was the forerunner of the F.B.I. In order to fully investigate Garvey and the UNIA the very first African American agents were hired in order to infiltrate the organization.

Their investigation led to Garvey being convicted of mail fraud in connection to the sale of Black Star Line stock. Marcus Garvey was sentenced to five years and he began serving his sentence on February 8, 1925 at the United States Penitentiary in Atlanta, Georgia. Garvey’s sentence was eventually commuted by President Calvin Coolidge, however, since he was a felon and not a U.S. citizen he was deported.

Garvey spent time in Jamaica before moving the headquarters of the UNIA to London, England. It was there, on June 10, 1940, Marcus Garvey died after reading his obituary even though he was very much alive. It’s said upon reading it he suffered a heart attack. Because of travel restrictions during World War II he had to be buried in London. In 1964 his remains were reburied in Jamaica at National Heroes Park.

Dr. Martin Luther King, Jr. laid a wreath at his grave in June, 1965, and remarked, “[Garvey] was the first man of color to lead and develop a mass movement, the first man on a mass scale and level to give millions of Negroes a sense of dignity and destiny.”

Over the years Marcus Garvey has inspired many members of the Nation of Islam as well as members of the Rastafari movement who refer to Garvey as a prophet and in some circles he’s thought to be the reincarnation of John the Baptist.

You can see the Marcus Garvey photo album here.

I like your history blog.
I'd like write more things, but my english is very poor, sorry.

I knew this because it was part of the New York City public school curriculum in fourth grade which covered the history of where we lived! The various neighborhoods, districts, and ethnic groups were emphasized.

I also pointed out that there is a Marcus Garvey Park which constantly reminded me of him.

New York City has a vibrant and rich past peppered with all sorts of interesting personalities.
Additionally Harlem is a fascinating place to visit and one should start with the Schomberg R Center for Research in Black Culture to find out about him as well as other influential African Americans.

So don't feel badly that you missed out on this, I hardly learned anything in school about Georgia.