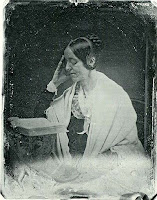 1. Margaret Fuller was a member of a prominent group of New England writers and philosophers who developed transcendentalism.

2. Transcendentalism states people should transcend or overcome the limits of their mind and let their soul reach out to embrace the beauty of universe.

3. Ms. Fuller, along with Ralph Waldo Emerson, founded The Dial which published poetry and essays regargarding the transcendentalist movement.

4. She organized meetings for women in Boston to promote education and intellectual development.

5. Her book, Women in the Nineteenth Century, argued women should have equal political rights.

6. In 1844, Horace Greeley hired her as a literary critic with the New York Tribune.

7. In 1846, Mr. Greeley sent her to Europe to cover reform efforts across the continent.

8. While in Italy, Margaret Fuller met and married Giovanni Angelo Ossoli—he was a revolutionary fighting to unite Italy into one country.

10. In 1850, Ms. Fuller along with her husband and child returned to the United States. The Italian Revolution had fallen apart.

11. The Fuller-Ossolis sailed aboard the Elizabeth, an American merchant freighter carrying cargo that included marble from Carrara and a statue of John C. Calhoun sculpted by Hiram Powers.

12. While at sea for five weeks the ship’s captain, Seth Hasty, died of smallpox. Margaret’s child, Angelino, also contracted the disease but recovered.

13. As the ship approached Fire Island, New York it hit a sandbar (perhaps due to the inexperienced first mate being in control) it hit a sandbar. Many passengers urged Margaret Fuller and her husband to jump overboard to save themselves, but they didn’t. Ossoli was thrown overboard by a wave and following that witnesses stated (the ship was only 50 yards from the shore) Fuller could not be seen.

Margaret Fuller, her husband, and her child all drowned.

The image with this post is the only daguerreotype of Ms. Fuller known to exist.

Click my keyword “Thursday Thirteen” to view more of my 13 lists. Other bloggers participate as well. You can find them here
Posted by EHT at Thursday, October 23, 2008

What a moving story her life, and death, was.

A very interesting life. Such a tragic ending.

I'm embarrassed to admit I had never heard of her. Thank you for that TT. I wasn't expecting a sad ending though. How tragic that such an interesting life was cut short.

What an ignominious end to an interesting woman.