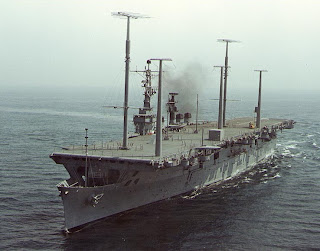 Question: How does this ship have a connection to Watergate?

Remember the name, Bob Woodward? Yep, he’s the guy along with Carl Bernstein that helped bring down the Nixon White House with their Washington Post stories involving the Watergate burglary.

At one point young Bob Woodward served in the US Navy and the ship in the image above was his first of many posts…The USS Wright.

In the book Silent Coup by Len Colodny and Robert Gettlin it is revealed that Lieutenant Woodward eventually ended up as a briefing officer for Admiral Moorer in 1969. Woodward was often doing Top Secret work as Admiral Moorer was then the head of the Joint Chiefs of Staff. One of his assignments was to act as a briefer for Alexander Haig….Not sure who he was?

Alexander Haig was the Military Assistant to the Presidential Assistant for National Security Affairs. Basically what this government-speak means is he was Henry Kissinger’s assistant in 1969. Later during the height of the Watergate mess Haig was Nixon’s Chief of Staff.

Kind of makes you wonder what sorts of things came up during those briefings between Woodward and Haig in the White House basement….In 1969, Woodward was basically a lackey in the Nixon Whitehouse, and by 1973 he was bringing the walls down around their ears.

Funny how things work out, huh? This also explains why many often mentioned Alexander Haig as a possible source for the infamous Deep Throat.

You can find other bloggers participating in Wordless Wednesday here
Posted by EHT at Wednesday, October 01, 2008

Just a note to let you know that when visiting your blog, It takes forever to complete loading ( and I have broadband ). I also picked up a corrupt file thingie, waox file with elementaryhistoryteacher attached to it ? I don't know what this is or how to exercise it from my computer, but it usually goes away after I click on the x.

Thanks! Sorry about the "thingy" I gave you. :( I'm working on the slow loading issue. It drives me up the wall.....I'll work on it this week.