I’m a huge fan of old movies….the sort Channel 17 (WTBS) out of my hometown of Atlanta used to show all day on Saturdays back when Ted Turner used to own the station. Those movies sparked my love of history by connecting events for me and providing information about manners of dress and social and cultural mores of various historical eras.

I’ve used various movies in my own classroom to spark motivation, to provide visual images in context, and mainly because movie treasures simply aren’t shown on television like they used to be without really hunting for them…..

Beach Red is the title of a film that was nominated for an Oscar in 1967 for best film editing. Cornel Wilde directed and starred in the World War II film along with Rip Torn. The film depicts American soldiers landing on a unamed beach held by the Japanese in the Pacific. The movie tells the story written by Peter Bowman who actually served in the U.S. Army in the Pacific during World War II. Many have claimed the opening sequences of Beach Red can be compared to the more modern Saving Private Ryan. 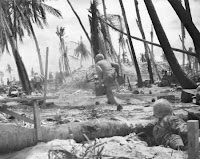 During the making of Beach Red Cornel Wilde had little assistance from the U.S. Marines as they were a little preoccupied with a place called Vietnam. The Marines did provide some old footage, but the film was so damaged Mr. Wilde spent most of the film’s budget refurbishing the film clips……a nice little present the U.S. government and historians appreciate today.

While the opening sequence could be any of the Pacific islands that saw fighting during World War II, I find the title particularly interesting…..Beach Red. Of course the significance is right there in front of you. The fighting, of course, made the pristene white beaches red…red with the blood of American and Japanese combatants.

Flip the words and you arrive at the name of an actual location….Red Beach…Red Beach on Tarawa Island…better known to some as “Bloody Tarawa” where after three days of savagery more than a thousand Americans died and more than two thousand were wounded. The Tarawa battle was the first major amphibious assault in the Central Pacific on a Japanese stronghold during the Pacific War.

Leon Cooper’s job, as a Naval landing craft officer, was to land Marines of the 2nd Division on Red Beach. He made several landings, each time watching scores of his countrymen being cut to pieces by Japanese gunfire. His sad duty later was to transport the wounded back to his ship for medical treatment. Unlike later invasions, there was no Navy hospital ship in attendance to render expert medical care. The image below shows Mr. Cooper standing next to a landing craft similar to the one he was assigned to during the war. 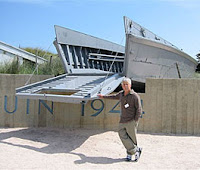 Far more disturbing than the garbage on Red Beach; hundreds of Americans still lie where they fell during the battle sixty-five years ago, including Congressional Medal of Honor winner, Marine Lt. Alexander Bonnyman. Backed by veterans groups, History Flight (Marathon, Florida) and WFI Research Group (Fall River, Massachusetts) have now completed an exhaustive survey of battle sites in Tarawa using radar and surveyor-quality Trimble GPS system, and have located the remains of 139 Marines. An article regarding the discovery of the remains can be found here.

The last organized effort by the Government to identify and repatriate the remains of Americans killed in Tarawa, and located in various sites on the island, was a six-month study completed on May 20, 1946. A report by the Army Quartermaster Section, Memorial Branch, dated July 3, 1946, states that, “About fifty percent of the bodies previously reported buried on Tarawa were found, and of that number, only 58 percent were identified.” There has been no effort by the Government to follow up on the 1946 investigation.
According to the Department of Defense, 72,766 American Armed Forces personnel of World War II are still listed as MIA. At least fifty percent lie where they fell in various Pacific Islands, including Tarawa.

December 7th….that day that does live on in infamy….will be the day that Leon Cooper (I wonder if he’s related to my husband’s family?) will arrive in Washington D.C. to meet with members of Congress to discuss his efforts for the last three years to have the US government remove the garbage that litters Red Beach in Tarawa [and to discuss the American remains on the island].

Time Magazine for December 6, 1943 stated, “Last week some two to three thousand U.S. Marines, most of them now dead or wounded, gave the nation a name to stand beside those of Concord Bridge, the Bonhomme Richard, the Alamo, Little Big Horn, and Belleau Wood. The name was Tarawa.”

Cooper says, “It is a sad commentary about our nation that private organizations have assumed the responsibility of locating the remains of American dead in Tarawa. They are doing this because our nation has failed to do so. These private organizations feel that those who died in defense of our country deserve to be repatriated and to be remembered with dignity and respect. Their relatives are entitled to closure. It is our nation’s shame that we have allowed these honored dead to lie in unmarked graves in that far off land all these years.”
Cooper made a trip to Tarawa this past February, returning with still painful memories of his battle experiences, taking a camera crew with him to film the garbage on Red Beach and to find out more about the American dead on the island.

The record of his visit is captured in a documentary, "Return to Tarawa--The Leon Cooper Story." (Please click the link for a documentary trailer) Narration is by movie great, Ed Harris. It will soon be released. Mark Noah, of History Flight, made significant contributions in the making of the film. Major television channels have expressed interest. A major national magazine wants to review the film.

Mr. Cooper’s books, “90 Day Wonder—Darkness Remembered,” and “The War in the Pacific—A Retrospective” are available with websites located here and here, and his blog
90 Day Wonder can be found online.

All too often we teach in our classrooms that the war continued in the Pacific after VE-Day, but by that point we are itchy to get on with other things. Oh sure, we hit the highpoints….the easy stuff like McArthur’s surrender in the Philippines, Midway, Iwo Jima and then we race headlong into into those horrendous events of August 6th and 9th—the nuclear bombings of Hiroshima and Nagasaki in 1945.

What about all of the various island-hopping battles that got us to the surrender agreement signed on the USS Missouri in September, 1945?

What about the aftermath? How did the battles change the lives of the people who lived on many of those islands?

All of this asks interesting questions that could spark deep thought and interesting debate.

The portion of this post that you see in italics were sent to me in an email alerting me to Mr. Cooper’s efforts.

Here is another Tarawa remembrance story.

More information regarding the litter of war found on Tarawa.
…and war damage isn't the only concern Tarawa has today.
Posted by EHT at Saturday, November 29, 2008

For those who desire a bit more detail about the three day battle at Tarawa, the December issue of Naval History has two feature stories and an number of sidebars that are excellent. The issue should be available at Borders or Barnes & Noble.

A third part of this special issue is an interview with Major Norman Hatch, USMC (Retired). Major Hatch, a Staff Sergeant in 1943, shot much of the film that documented the battle.

Thank you, Joe.....and thank you for your service to our country!

Many thanks for your sensitive "history lesson" combining selections from my "Mr Cooper goes to Washington" to your review of the carnage of that battle. About the American dead still there...
Gladstone, the 19th century English PM said, "One can tell much about the heart and soul of a nation by the care and reverence with which it deals with the remains of those who died in defense of their country.

My Daddy was a Marine Corps veteran of WWII in the Pacific. Naturally, I maintain a strong interest in the history of that campaign. In his name, which was the same as mine, I thank you for your research and remembrances.

Mr. Cooper, I'm very honored and flattered that you took the time to visit and comment. I commend you for the work you are doing on behalf of the men who died during the Tarawa battle.

Thanks for stopping by Paw Paw Bill. The Pacific Theatre took a heavy toll on this nation.