13: The Discovery of HMS Ontario 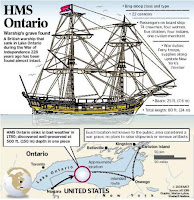 When we think of the American Revolution we tend to focus on land battles like Lexington, Trenton, and Yorktown….rarely do we discuss ships and how they played a role in the War for Independence.

Recently a 22-gun British warship was located at the bottom of Lake Ontario near the southern shore. Many shipwreck enthusiasts have named the HMS Ontario the “Holy Grail” of shipwrecks because it was considered a lost cause as far as locating it.

1. During a gale on October 31, 1780, 130 people lost their lives as the HMS Ontario plummeted to the lakebed. There was a garrison of 60 British soldiers, a crew of approximately 40 men, and possibly about 30 American war prisoners aboard.

2. The ship was finally found in water up to 500 feet deep using side-scanning sonar and an unmanned submersible making it the oldest and only fully intact British warship ever found in the Great Lakes

3. Luckily the finders of the wreck understand the ship is a war grave and have no plans to raise it or remove any of its artifacts.

4. In an interview the finders also indicated the ship is still considered to be property of the British Admiralty.

5. The finders located the ship resting partially on its side, with two masts extending more than 70 feet above the lake bottom.

6. One of the finders was quoted as saying, “Usually when ships go down in big storms, they get beat up quite a bit. They don’t sink nice and square. This went down in a huge storm, and it still managed to stay intact. There are even two windows that aren’t broken. Just going down, the pressure difference, can break the windows. It’s a beautiful ship.”

7. The fact that the waters of Lake Ontario are very cold and deep are positives that helped the HMS Ontario remain pristene. There was little light and no oxygen to hasten decomposition, and little marine life to feed on the wood.

8. The HMS Ontario only saw five months of water travel. It was used to ferry troops and supplies along the frontier of upstate New York. Ship enthusiasts state she was the largest British ship on the Great Lakes at the time.

9. Once the British knew HMS Ontario had been lost they searched for her while keeping her disappearance a secret from the Continentals, but a day after the sinking hatchway gratings, the binnacle, compasses, and several hats and blankets drifted ashore. Later the ship’s sails were found drifting on the lake.

10. Six bodies thought to be from the HMS Ontario were found near Wilson, New York.

11. Two centuries later the ship was finally found. One of the finders had been searching for the HMS Ontario for over 35 years. For the last three years over 200 square miles were searched before the ship was found earlier this month

12. The finders state there should be no disputes regarding their identification of the find since the HMS Ontario had a rare feature…..two crow’s nests on each mast. Another was a decoratively carved bow stem. Two cannons were found, two anchors, and the ship’s bell.

13. Finally, what really clinched the ship’s identification was the quarter galleries on either side of the stern --- a kind of balcony with windows typically placed on the sides of the stern-castle, a high, tower-like structure at the back of a ship that housed the officers’ quarters.

Currently a documentary is being planned to detail the find.

You can see a video of the submerged ship at this YouTube link.

You can find more bloggers participating in Thursday Thirteen here.
Posted by EHT at Thursday, November 13, 2008

Oh, this is very interesting. My son will enjoy watching the video.

Amazing video. I find the searching for shipwrecks fascinating, even though I'd never do it myself. Thanks for the link and information. I'm glad there are not plans to salvage it.

Very interesting. I'm gad they are not going to plunder the wreck.

Wow, how refreshing with a historical T13. I loved to read all about it. I love old ships. So much history, peoples life before are always so interesting. To compare their lives and ours...

Thanks for visiting everyone. The wreck was found over the summer....with all of my health issues it's simply taken this long for me to finally post about it.

What a great site! I am going to forward this to my history teacher friends! Thanks!