A Christmas Fire at the White House 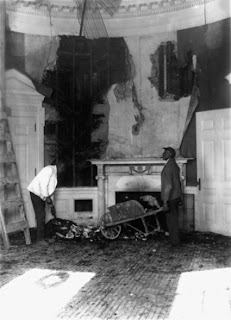 The White House has endured a few fires over the years, but one particular fire occurred during the Christmas season, and the Oval Office received some major damage.

See my most recent post…Up on the Rooftop...Hoover Watched over at American Presidents Blog.
Posted by EHT at Tuesday, December 16, 2008

My late cousin, Joe Bailey, was a photographer with National Geographic and a past president of the White House Press Photographer's Association.

He told a rather lovely story about the time he was photographing the Reagan's personal quarters, for the official White House tour guide, shortly after they moved in.

Joe thought it would make the place more 'homey' if he lit a fire in the fireplace. Unfortunately, he forgot to open the flue!

Smoke poured into the room at the same time as the Secret Service and Mrs. Reagan. This soft-spoken southern gentleman was mortified!

Mrs. Reagan graciously put her arm around the still-mortified photographer and said very happily, "Now it smells like a real home!".