You cannot research Pearl Harbor…..you cannot teach Pearl Harbor….you cannot “know” Pearl Harbor without having read Pearl Harbor: The Story of the Secret War by George Morgenstern published in 1947. James J. Martin in the Journal of Historical Review calls Morgenstern’s book the best, despite a formidable volume of subsequent writing by many others on the subject…and is probably the most widely commented upon book every produced by the World War Two Revisionist impulse in this country…Mr. Martin further states everyone writing on the subject of Pearl Harbor has either consciously or unconciously followed the “scenario” first laid down by George Morgenstern.

So, if Mr. Martin doesn’t convince you to read this definitive work on Pearl Harbor perhaps I can. First of all by bringing up Morgenstern’s work you can introduce yourself or your students to the concept of revisionist history. Just by the very moniker itself it sounds as if someone is changing history….and I’m always suspect in that. Change it if the facts bear out, but otherwise leave out your propaganda and “what if” theories. By definition historical revisionism is the reinterpretation of orthodox views on motives or process surrounding an historical event. The assumption of the revisionist is that the interpretation of a historical event or period as it is accepted by the majority of scholars needs a significant change.
Another reason why I would use Morgenstern’s work to round out my coverage of Pearl Harbor in my classroom has something to do with this young man:

Isn't he fine? This very capable young man is my husband….yes, Mr.Elementaryhistoryteacher, as he appeared in 1978 at the age of 19. You can find out more about his service to our country here. By bringing up a personal connection I have to the event I’m teaching, I can draw some students into the content mix. Instantly there is a flurry of “me, toos!” as students want to tell me about family members who have served or are serving in the armed forces.

If you clicked through you saw the picture of the ship I have below….a picture of the Harry E. Yarnell. For six years the good old Harry E. Yarnell was my husband’s home away from home as he sailed the Mediterranean Sea and the Indian Ocean. I can’t tell you how many times I addressed an envelope to “Mr. EHT” aboard CG-17…Harry E. Yarnell….I can still recite the entire address though many years have flown by. I wish I still had all those letters….sometimes I wrote one everyday during my high school years from 10th grade on….what a diary I would have if “Mr. EHT” had held on to those letters, but alas he did not. I have his though….a good number of them.

Ok….back to the subject matter at hand—Pearl Harbor—as the attack on Pearl Harbor was remembered this past Sunday. Mr. Morgenstern’s book tells of an important event that has a connection to my husband and the ship he sailed on. You see, the Harry E. Yarnell that my husband’s ship was named for had a Pearl Harbor connection. Admiral Harry E. Yarnell served in the U.S. Navy for fifty-one years, Commander of the U.S. Asiatic Fleet (1936-1939) and perhaps the inspiration for the Japanese attack of December 7, 1941 on Oahu.

Yes, you read that right…..the inspiration for a day that has lived in infamy….yet, I would bet most Americans have never heard of Admiral Harry E. Yarnell.

Pearl Harbor was not just a disaster, he [Morgenstern] declared; it was what got the U.S.A. into the Second World War. And it was not satisfactory or sufficient to explain it away as a result of Japanese perfidy," which has dominated all discussion of it since Dec. 7, 1941. It has permitted the Roosevelt administration to "manage national policy as if it were a private show," from that time on. As a war correspondent in a strategic spot [Morgenstern] knew that Wartime censors closed in even more tightly about the field of public policy," and FDR's Decisions" were announced to the people after the event" routinely from entry into the war ever after. And, Morgenstern pointed out, increasing secrecy led to the invention of a new category of hush-hush information which could only be described in the phrase Top Secret.'" "The conclusions stated in Pearl Harbor are those to which the author was led by the record."
Morgenstern insisted, going on to say:
"Those who object to historical skepticism may complain that my book is no contribution to the political canonization of its central figure. That is no concern of mine. As to the purpose my book is intended to serve, some observations from the minority report of the Joint Congressional Committee which investigated the Pearl Harbor attack are pertinent: 'In the future the people and their Congress must know how close American diplomacy is moving to war so that they may check in advance if imprudent and support its position if sound ... How to avoid war and how to turn war -- if it finally comes -- to serve the cause of human progress is the challenge to diplomacy today as yesterday.'"
Let’s go back in time a bit before Pearl Harbor to February, 1932.
From this source...

Rear Admiral Harry E. Yarnell pioneered carrier tactics in an exercise that later came to be discussed as Fleet Problem 13. [Yarnell] commanded the carriers Lexington and Saratoga in an effort to demonstrate that Hawaii was vulnerable to naval air power.
At a time when air warfare waged from ships was radical thought Admiral Yarnell fully supported the idea.
The expectation was that Yarnell would attack with battleships, but instead he left his battleships behind and proceeded only with his carriers to the north of Hawaii where it was less likely he would be detected. With a storm as cover, at dawn on a Sunday, February 7, Yarnell’s 152 (some sources state 153) planes attacked the harbor from the northeast, just as the Japanese would ten years later. The army airfields were first put out of comission after which battleship row was attacked—with multiple hits on Navy ships. No defending aircraft were able to launch. The Navy’s war-game umpires declared the attack a total success, prompting Yarnell to strenuously warn of the Japanese threat.
The Navy exercise became known as Fleet Problem 13 and the results were largely ignored by Navy brass while the Japanese….the revisionists declared... paid close attention. 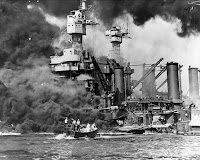 Following Pearl Harbor [Yarnell was] repelled and gravely angered by the Administration’s tactic …of scapegoating the military and especially the naval commander for it all, [and] denounced this action as “a blot on our national history.” Writing of Morgenstern’s book in Far Eastern Survey, he forthrightly declared, “Mr. Morgenstern is to be congratulated on marshaling the available facts of this tragedy in such manner as to make it clear to every reader where lies the responsibility.”
…and this brings me to third reason to explore Morgenstern’s book and Fleet Problem 13 for students. The event would make a great mystery type activity for students where they are given a designed framework to research and discover on their own. Their results could then be debated with the class with some students using Fleet Problem 13 as the inspiration for the attack on Pearl Harbor and others using more popular causes for the event.
Posted by EHT at Tuesday, December 09, 2008

Visit my photo album tribute to these veteran shipmates: