Who the Heck Is Thorfinn Karlsefni? 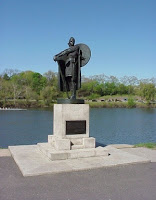 
Dig down deep into that creaky file cabinet in your mind and pull out the folder labeled “Vikings” and name a few of the more famous ones for me.


No, not the football team. There should be another folder there for the OTHER Vikings. You know, the Norsemen who were explorers, warriors, merchants, and pirates.

There you go. That’s it. Wow, that folder hasn’t seen the light of day in…..well, just blow the dust off it and open it up.


Leif Ericsson….son of Erik the Red


Canute (Knut or Cnut) Sweynsson….better known as Canute the Great….King of England, etc.
Those are usually the top three names I get. Most of the time folks just give me Erik and Leif.

What about Thorfinn Karlsefni?


Yep, you are so very right. Who in the heck is Thorfinn Karlsefni?


1. Thorfinn was a Norse merchant who followed Leif Ericsson’s route seven years later.…around 1010 AD…to North America.
2. While on a trading trip to Greenland Thorfinn met and married Gudrid Thorbjarnardottir, the widow of Erik the Red’s son, Thorvald. (Believe me, I’m glad I don’t have to type these names every day.)


3. Snorri, the son of Thorfinn and his wife is thought to be the first European baby born in North American.


4. The location of Snorri’s birth it thought to be Buzzards Bay, Massachusetts. Other locations given include Long Island Sound, the Bay of Fundy, or L'Anse aux Meadows


5. Three years after arriving in North America, Thorfinn and his men abandoned the settlement they created and went to Greenland first…..then Norway and finally settled in Iceland, his childhood home.


6 Why was the North American settlement abandoned? Perhaps distance was the key. Some scholars theorize that Vinland was to the Vikings like India was to Alexander the Great…..it was beyond the Viking’s ability to impose their will. Others argue that climate change was the culprit.


7. You can find a statue of Thorfinn Karlsefni in Philadelphia, Pennsylvania....pictured here with my post.

8. Thorfinn grew up in Iceland and can count Aud the Deepminded, a queen from the British Isles and Ugarval, King of Ireland in his lineage though I have found no verifiable reference to Ugarval.


9. Archeology supports the long-held theory that it was Thorfinn who began the tradition of telling the Viking sagas that were passed down from generation to generation.


10. Sagas recount for most of our knowledge regarding Viking history, but it is important to remember we must separate Viking fantasy from Viking fact. Archeology lends credence to the sagas. Sagas that include Thorfinn explain he left North America after a clash with Native Americans.


11. One of the sagas tells the story of Freydis and Thorvald…a married couple that accompanied Thorfinn and his wife to the New World. When attacked by Native Americans the saga states that the Viking men ran off leaving a pregnant Freydis to scream after them, “Why do you flee from such pitiful wretches, brave men like you? If I had weapons, I am sure I could fight better than any of you.” At this point Freydid picks up a sword and exposes her breast to indicate she is a woman and frightens off her attackers. There are other versions of this particular saga…..


12.Once he settled in Iceland the records indicate Thorfinn never returned to North America.


13. Archeologist discovered a turf mansion believed to belong to Thorfinn in Iceland.


An online article regarding Thorfinn and the archaeology that proves some of the sagas concerning him can be found at Smithsonian Magazine online.


Other bloggers participate in Thursday Thirteen. You can learn more about the meme or find links to other participants here
Posted by EHT at Thursday, November 19, 2009

Wonderful post! I had never heard of Thorfinn. I learned something. Thanks.

I am Harriet said...

Who knew ?
Have a great Thursday!
http://iamharriet.blogspot.com/2009/11/would-you-want-your-phone-number-to-be.html

Sheer coincidence that moments after reading your post, I should stumble across a related one: http://ty.rannosaur.us/7-badass-vikings/ No mention of Thorfinn there (nor of the Kensington Runestone), but then the focus is less academic...

Love it. I also got to learn some new things.

And, why did Eric and his small band leave Iceland? Blood feuds against a bigger clan could do that......

I have heard theory that climate change was a factor in the destruction of "viking" settlements in Greenland.

Just an interesting note, IIRC, Greenland is today administered by Denmark. Seems the Danes gained control of it somewhere along the line from the sons of Norway....

Fascinating history that's missing from history books. I'm currently an education student with a history minor. I didn't know the story of Thorfinn. Our schools focus far to much on Christopher Columbus, ignoring the fact that the vikings reach America hundreds of years earlier. I think we need to re-evaluate what we're teaching in our schools.

Hi, I am learning about vikings at my school. I am a 6th grader.We are doing a project on vikings, and I choose to do the project about Thorfinn Karsefni.We have learned about Thorfinn Karsefni a little and I can tell you that you made a mistake It was Leif Erickson who followed Bjarni's route not Thorfinn,Thorfinn in 1008AD went to Vinland (which is now Newfoundland in Canada)to live in an viking colony.He had the first European baby born in N.America with his wife Gurdid. His child's name was Snorri.Thats all I know.

Although I have always been interested in the Viking tales, I had never heard of Thorfinn - until I saw the movie "Severed Ways." It's an interesting, odd telling of this story. Your readers might enjoy it.

Although I have always been interested in the Viking tales, I had never heard of Thorfinn - until I saw the movie "Severed Ways." It's an interesting, odd telling of this story. Your readers might enjoy it.