I keep several little reminders of my past on my desk at school. I have three small clay bowls I made in elementary school that at one time or another I presented to my mother for Mother’s Day or her birthday. One of the bowls stayed on a table in our living room for years with a small dried flower arrangement in it. On a picture stand I have a small picture I drew when I was a child that was glued to a piece of ply board and then covered with a clear glaze. I have a mold of my tiny hand made in second grade painted shimmery gold. I remember my teacher, Mrs. Smith, telling us to make sure we had signed our names to the bottom so that they would be true works of art. Today when my students explore my room at the beginning of the year they oogle my relics and ask, “Did you really make this when you were little?” I point to my handprint and proudly tell them, “Yes, and if you don’t believe me look at the name on the bottom.”

In my home I have a coffee table that Mom and Dad had in their very first house. The table is featured in just about every picture taken of my family room growing up. My son has already claimed the table and, he swears he will keep it safe and pass it along when the time comes. Today the “s” in permanent marker is still on one end of the table where I wondered what would happen IF……

I’m sure you don’t need for me to tell you the rest of THAT story.

I have some of my mother’s jewelry. Mostly the pieces are very simple costume-type items, but they are pieces I remember rummaging through her drawer and then trying them on for size. Now I can wear them and no one tells me I can’t, but the joy of wearing Mom’s jewelry is bittersweet because the tradeoff is simply too empty to imagine.

Isn’t that the way with mothers and daughters? When you finally get to wear the “big girl” jewelry you are surprised to find out the one person you want to see you wear it isn’t there to help you enjoy it. 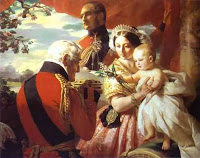 The painting is titled The First of May and shows Prince Albert and Queen Victoria holding Prince Arthur who would one day be the Duke of Connaught. Prince Arthur’s godfather, the Duke of Wellington, is presenting him with a jewel-studded gold box.

Notice the tiara Queen Victoria is wearing. It is the same one pictured in this post. It is known as the “King George III Fringe Tiara”. Sometimes it is referred to as the “Fringe Tiara”.

This tiara was actually made as a necklace in 1830 from diamonds once belonging to King George III, the British king during the French and Indian War and American Revolution my students are now exploring. The tiara can be worn as a collar type necklace or once mounted on a thin wire it can be worn as a tiara. It is reported that Queen Victoria first wore the tiara to the opera in 1837, and of course, she wore it as Winterhalter painted the image I posted above. Upon Queen Victoria’s death the tiara was willed to the Crown along with several other pieces of jewelry to be worn by all future Queens.

Notice Queen Alexandra on the right is wearing a similar tiara called the Kokoshnik Tiara. Princess Louise is on the left and around her neck is the same Fringe Tiara. On one website I was able to learn that the tiara had been given to Princess Louise as a wedding gift. I am doubting this. It may have been loaned to her for the occasion since it was included in items Queen Victoria willed to the Crown. Queen Mary would be the next to wear it after Queen Alexandra. Leslie Field’s excellent book, The Queen’s Jewels, traces the line of this tiara very well and does not mention it was given to Princess Louise. While I searched and searched for an image of Queen Mary wearing the tiara the only picture I have ever seen is in Leslie Field’s book.

In 1947, Queen Elizabeth loaned the tiara to her daughter Princess Elizabeth, today’s reigning monarch, to wear as her “something borrowed” at her wedding to Prince Phillip. There is a famous story about how the tiara wire broke as the Princess was dressing for the wedding. The court jeweler was standing by in case of any emergency and immediately took the tiara along with several court policemen to a side room to fix the tiara.

In 1973, Queen Elizabeth was then known as the Queen Mother. She loaned the fringe tiara to her granddaughter, Princess Anne, for her marriage to Captain Mark Phillips. 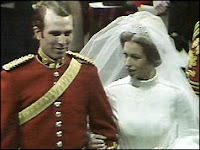 Every family has items that seem to flow from one generation to another. If we look at family pictures closely enough we can identify items that have stood the test of time.
Royal families are no different.

If you are wondering why I’m re-running prior postings see the article HERE.