Cinco de Mayo....Just What ARE We Celebrating? 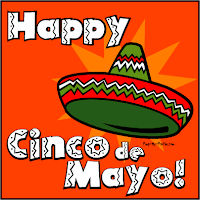 This post originally ran in May, 2008. I thought it was appropriate to re-run it today…..

Ah, testing is over….Spring has sprung….and the fifth of May brings cries of Happy Cinco de Mayo, Elementaryhistoryteacher!

Students discuss how their families will invade the nearest Mexican restaurant for special deals, free beer for the adults at some establishments, and lively music.

Whoa there…I like Mexican food, music, and an occasional beer as much as the next person, but exactly what are we celebrating?

It’s lunchtime and lots of people are moving about the campus, so I send out a group of kids with clipboards in hand and ask them to take an informal survey asking any adult in the hallway, media center, lunchroom, or main office why Cinco de Mayo is celebrated. I send out another group to ask students at lunch the same question.

The two groups remaining in the classroom stay busy until our survey takers return. Fifteen minutes later the data is passed along to the groups that stayed in the room, and they get busy analyzing the answers.

What they discovered is that it doesn’t really matter whether the person is old or young, white, black, or Mexican…..no one in our survey group can really truly can state that they know why Cinco de Mayo is celebrated. Some think they know, but they aren’t sure. A few adults stated they thought the day was set aside to celebrate Mexican independence like the Fourth of July. Others felt that the day must commemorate a great victory of some sort.

Wrong and wrong, sort of.

Cinco de Mayo is NOT a day of independence for Mexicans….THAT day is September 16th.

Cinco de Mayo is NOT a holiday recognized by the Mexican government.

Cinco de Mayo IS a regional holiday celebrated in the area of Puebla to commemorate the Battle of Puebla. It occurred in 1862 when the Mexican forces beat back French forces, but only for a bit. A year later Mexico was totally defeated by the French, and the Hapsburgs began to rule.

The day began to be celebrated by Mexicans living in the United States to celebrate resistance to French rule in Mexico.

Should the fifth of May be such a big deal?

This editorial form the New York Times examines a little of the history and discusses why you might be ordering a Corona this afternoon or tonight.

Over the years Cinco de Mayo has become an informal holiday to recognize and appreciate Mexican culture here in the United States, and after our survey and research into the matter it was decided that learning more about a culture and celebrating it a bit isn’t such a bad thing, but perhaps we all need to know what we are celebrating before biting into that chalupa or asking for another Corona.
Posted by EHT at Wednesday, May 05, 2010

Very interesting. I had no idea!

I love this topic. You are correct... people LOVE to celebrate Cinco De Mayo, but have no clue what it represents. At minimum, it does represent the underlying admiration the people of the United Staes have for the hispanic culture. That is why they celebrate the day in many different ways.