Millard Fillmore was a Know Nothing 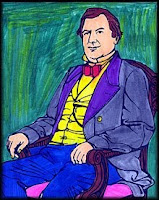 I write the following sentence on the board: Millard Fillmore was a know nothing. I ask students to tell me what the sentence means.

Another comment is added. “That guy, Mil-, Mil-. That Mil- guy doesn’t know nothing.” I ignore the grammatical error. At this point it will just confuse them.

I try to turn students in another direction. “What are nouns?”

Someone regurgitates “Words that name people, places, ideas, and things.”

I counter with, “What’s our strategy to find nouns?” Several seconds go by. I hold up my board marker and point to it. Several hands go up.

“We look for noun markers like the words a, an, and the.”

“Good, take a look at the sentence again. What do you see?”

“Yes. So is Millard Fillmore stupid?”

“No, somebody is calling him a name.”

“What else do you notice about the words “Know” and “Nothing”?

After several tries someone tells me that the words are capitalized. I counter with a “So what?”

A show of hands. I choose someone. “Know-Nothing is a name for something.”

I end our little language arts episode by telling students that Millard Fillmore was our 13th president and he was a member of a group called the Know-Nothings. I tell students their goal during the lesson is to determine how Fillmore became a Know-Nothing and what the group represented.

Millard Fillmore was a fine example of the American Dream. He grew up on a farm in the Fingerlakes region of New York. He attended a one room schoolhouse. By fifteen he was apprenticed to a clothes dresser. He worked hard and by 1823 was admitted to the bar. He got involved in politics and worked his way up through the ranks by serving as a New York legislator and later became a member of Congress. He was elected vice president to serve with Zachary Taylor in 1848.

As vice president Fillmore presided over the Senate. He remained fairly closed mouth concerning his position on the Compromise of 1850 aka the Kansas-Nebraska Act, but privately told President Taylor that if the vote was tied he would vote in favor of the bill.

Taylor died unexpectedly and Fillmore became the thirteenth president. The new administration had conciliatory views concerning the main issue dividing the country at the time----slavery----which was a 180 degree turn from the previous administration.

Fillmore said, “God knows that I detest slavery, but it is an existing evil…and we must endure it and give it such protection as is guaranteed by the Constitution.”

Northern Whigs were upset with the Fugitive Slave law. They broke with Fillmore and refused to nominate him as their party’s candidate in the election of 1852.

In 1856, Fillmore accepted the presidential nomination of the Know-Nothing or American Party. Per Wikipedia when a member of the party was asked about the group’s activities, he was supposed to reply, “I know nothing.” They were a Nativist group that feared Catholics would gain too much control of state and local governments and opposed their immigration. They wanted to use government power to push their agenda regarding a Protestant Anglo-Saxon society. They called for limits on immigration, wanted to limit political office to native-born Americans only, and called for a twenty-one year wait for immigrants to become citizens. Other extreme desires of the Know-Nothings were a limit on the sale of liquor, restrictions on public school teaching to Protestants only, and to have their version of the Protestant Bible read daily in classrooms. Though Fillmore did not win the election he did receive 22% of the vote and the Know-Nothings were eventually absorbed into the Republican Party.
Posted by EHT at Saturday, May 15, 2010

I've always wanted to know more about the Know-Nothing party. I tell my students there was one, which is usually good for a laugh. I now have more to add to the conversation, thanks!

Thanks...This is a post I had first published in 2006....when I copy and pasted it I left a couple of lines out by mistake. Thanks for clearing it up for me ;)

I think of the Know-Nothings (and Sgt. Schultz of Hogan's Heroes) each time I look at the Washington Monument, which is often!

The construction of the Washington Monument was at a standstill due to lack of funds as well as the intervention of the Know Nothing Party. They believed the monument represented foreign interests. In fact, a stone that was donated by Pope Pius disappeared and its fate is a source of conjecture.

Here's an excerpt from the National Park Service:

In 1855, the small anti-Catholic, anti-immigrant American, or “Know-Nothing” Party seized control of the Washington National Monument Society through an illegal election, following a dispute over a memorial stone donated by Pope Pius IX. The Know-Nothings retained control of the society until 1858. While in control, the Know-Nothings added just a few courses of masonry to the monument using inferior marble, which were later removed. Construction halted in 1858 when the monument was at a height of 156 feet and the money ran out. It did not resume until after the Civil War. The monument remained unfinished for more than 20 years. Today a distinct color difference is still visible near the level at which construction temporarily stopped in the 1850s.

ALWAYS GOOD TO KNOW THAT HISTORY IS NEVER DEAD! THANKS!!