The Importance of Silver

At some point in every young girl’s life she realizes the importance of silver.

Perhaps it is when she has a female relative who is getting married, and she overhears other female relatives and friends inquiring about the silver pattern she has registered for. Perhaps it is when she is old enough…..finally……to attend a wedding or baby shower with her mother and sees the array of silver trays, silver flatware, and silver coffee and tea services on display making the perfect refreshment table.

In my case…….it was when I was old enough to help my grandmother prepare the dining table for a family dinner…..more than likely Thanksgiving or Christmas. I can remember going to the drawer in the kitchen where the knives and forks were stored. My grandmother shooed me away and directed me in that constantly out-of-breath tone she had, “No, no…..go in the dining room and get the forks out of the box.”

The box? As I walked into the dining room I thought, “What box?

Then I saw the box where she had placed it on the buffet….a rectangular, wooden box with a hinged lid. As I got closer I saw it was pretty old and fairly beat up. There were scratches across the top and sides, but instead of repelling me the poor condition of the box made me want to open it all the more.

That was my first foray into someone’s silver box, and like many a young girl it made quite an impression on me. I walked over to the buffet and placed my hands on the wood feeling the uneven surface.

What would I find inside?

I lifted the top and discovered lovely and fairly heavy silver utensils encased in deep Columbia blue velvet. The knives were standing up along the inside cover of the box while the spoons and forks were stacked up and laying flat inside the box.

Now that I know better I realize the silver was not expensive, but for my hardworking farming and at one time mill employed grandmother the silver was her best, and she wanted to use it for a holiday dinner.

I thought it was simply lovely. I loved how it felt in my fingers and how the light reflected off it.  During dinner I refrained from using my knife because I just couldn't bear sullying it with food.  It was THAT beautiful to me.

Later I questioned my mom about the box and discovered she had a silver box as well. My mother was not prone to using her best items for meals, so realizing we had silver was quite a surprise for me. My sister and I finally convinced Mother to start using her silver for family dinners, and eventually she bought more of it to complete her set.  Today the silver is a treasure for my sister and I.

Silver had its heyday in the United States between 1870 and 1920 though silver was in existence in our earliest days dating back to Paul Revere and the Dutch colonies. No matter the time period in history though silver was a luxury item and only the wealthiest homes had silver.

It was during the Victorian Age where silver flatware was its most decadent with some flatware lines having over 100 different types of pieces from a regular spoon, demitasse spoon, and a bouillon spoon. Then there’s the regular fork. Don’t get it confused with the pastry fork. Knives were in multiples as well with each flatware line having a knife for “place”, “dinner”, and one for “fruit” as well.

No wonder Victorian dining tables were so long.

This was also the time period where formal dinners went from three or four courses to ten or more including a course just for fruit and one for cheese.

Last week I posted a picture of a mahogany box and asked readers to identify what it was. I had no takers here but someone on Facebook correctly identified the box as a silver chest…..and that is exactly correct.

Here is a picture showing the box with a couple of silver pieces inside it. Notice this box is a little different from the silver box your family might own. The silver is stored upright in the little holes. It does not lay flat. 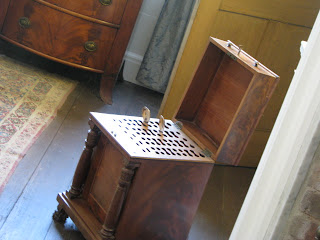 You can find out all sorts of information at the Silver Chatter blog…..a site headquartered in my neck of the woods…..Atlanta, Georgia with Silver Jim at the helm.
Posted by EHT at Tuesday, September 28, 2010

That's fascinating. I would never have guessed!

I love the silver chest with the upright storage! I've never seen one like that. I don't remember my mother having silver, but she used to tell me that her grandmother had flatware that was gold, and I was intrigued by that.