The Senate Chamber....A Playground for Children

I’m not happy with Congress these days…..I don’t know many of my fellow Americans that are. My title says it all. They play using my tax dollars as their kick balls and monkey bars.

However, before I go off on a rant that would cause my blood pressure to rise I want to go in a different direction with children….in particular “little boys.”

The other day I posted a drawing as one of my mystery images for Wordless Wednesday.  I’ve reposted it below:

The setting for the drawing is the United States Senate Chambers and the event being portrayed is the impeachment proceedings for President Andrew Johnson.


The drawing was included in a book titled The Story of a Great Nation (1886) by  John Gilmary Shea a writer, historian, and editor.
You can read my background article here regarding President Johnson’s impeachment over at American Presidents Blog.


I included this drawing on my Facebook profile and the page I have there for History Is Elementary. One of my visitors there…..my sister, to be exact…..noticed something about the drawing I had missed.


Look at the drawing again…..notice the two little boys in the lower right corner. They appear to be passing the time as best they could, don’t they?


Hmmm…..why are little boys in the Senate chamber during such an important event?


I never found a definitive answer, but I’ve made an assumption I can live with.


Now, observe another drawing of the events.   This drawing is from Harper’s Weekly and the artist is Theodore Davis.  All of his drawings detailing the impeachment hearings can be seen here. 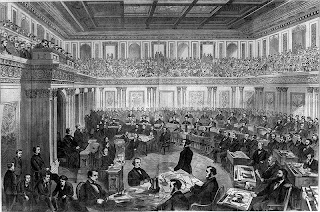 Now, notice in the Davis drawing there are no little boys.


This spurred me on even further to research the matter to discover why the young men were playing on the floor of the Senate chambers during the Johnson Impeachment hearings.Young boys (girls didn’t serve until later) began serving as Congressional pages as early as 1827.   Members of Congress would sponsor orphaned or destitute boys taking a paternal interest them per page program history. Just like today during sessions pages sit close to the dais in case they are needed.   It makes sense the young men in the drawing I used for my mystery image were passing their time waiting until they were summoned.


The drawing with the little boys would be a terrific teaser to use with students in order to introduce them to the Congressional Page Program.

....and don't forget to become a fan of History Is Elementary on Facebook.  See the "like" button in the right sidebar.
Posted by EHT at Sunday, September 26, 2010