When we think of Flappers we think of women in the 1920s wearing dresses with low waistlines, with hemlines a little below the knee, long strands of beads, rolled stockings, cloche hats, bobbed hair and lots of dancing, right?

1. All of that is true and more including rather scandalous behavior for the times that had to do with smoking, wearing make-up and being sexually promiscuous.  It has to be pointed out though some women took on the Flapper style, but they opted out regarding some of the more scandalous behaviors, but others took to some of the more tame activities which including driving a car.

2. The word "flapper" dates back as far as 1631 and meant "prostitute."  Eventually, it came to be a slang term referring to a mid-teenage girl.  In 1904, the novelist Desmond Coke used the term "flapper" in a sentence that read, "There's a stunning flapper."

3. Many think the Flapper Era began in the United States, but it can actually be traced to Great Britain via Germany.  By 1910, there were a series of stories in a London magazine regarding a 15 year old girl and her Flapper adventures, and in 1912, John Tiller, a British dance troupe organizer who specialized in precision dance mentioned a Flapper was a girl who had "just come out."   Tiller eventually brought his dance troupes to America and the "Tiller girls" eventually morphed into groups like The Rockettes. 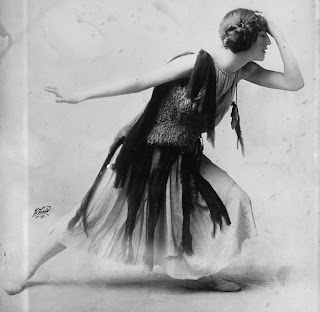 4. Author, F. Scott Fitzgerald and artist, John Held, Jr. are credited with first using the term in the United States.   Fitzgerald described the Flapper as "lovely, expensive, and about nineteen."  Held drew young girls wearing unbuckled galoshes that would make flapping noises when walking.  It is his illustrations that provide the idealized image we know today as the "The Flapper."

5. By 1920, the ideal image we have of a Flapper had evolved.  CoCo Chanel introduced the "garconne" look which means "little boy".  Women actually wound their chests with strips of cloth in order to flatten their breasts.  Waistlines dropped to the hips.

6. The Flapper Era encouraged clothing that was lighter and more flexible.  This encouraged women to be free and move around.  The laces and stays that were the norm during the Victorian Era were gone.  Many critics state the loose clothing led to independent thinking and of course, ended up with many having contempt for Victorian values.  Flappers certainly had image AND attitude. 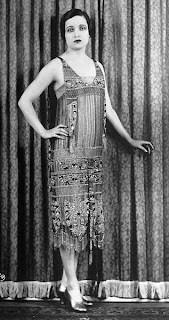 7. The type of "step-in" panties women wear today came into use during the Flapper Era replacing restrictive corsets and pantaloons.

8. Dances such as the Charleston, Black Bottom, and Shimmey were created during the Flapper Era.   A quote from Atlantic Monthly dated May, 1920 states, "...trots like foxes, limp like a lame ducks, one-step like cripples and all to the barbaric yawp of strange instruments which transforms the whole scene into a moving-picture of a fancy ball in bedlam."

9. The concept of dating was born during the Flapper Era.  Pre-arranged and chaperoned courting would soon become a thing of the past. 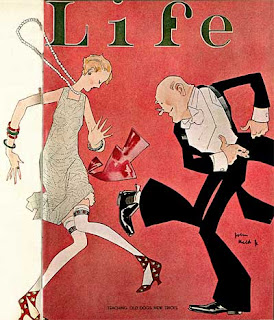 10. In an article during the decade titled, "Too Many Women", Dr. R. Murray-Leslie described Flappers as, "the social butterfly type...the frivolous, scantily-clad, jazzing flapper, irresponsible and undisciplined, to whom a dance, a new hat, or a man with a car, were of more importance than the fate of nations."

11. However, many historians argue the Flapper Era had its start because "the fate of nations" referring to World War I.  Many historians theorize the Flapper Era became so entrenched with society in the 1920s due to the loss of so many men in the Great War.  By the time the war was in full swing young men were dying left and right which led many people to cling to the eat, drink and be merry attitude.

Men and women opted for extreme (considered then) life changes.  Women had a very hard time...without possible suitors they didn't want to waste their life in spinsterhood.

12. Once the war was over it was hard to get back to normal.  Folks wanted to enjoy life, and they did.   They took risks.

13. The Flapper craze did not survive the Great Depression, but the new or modern woman had been created. 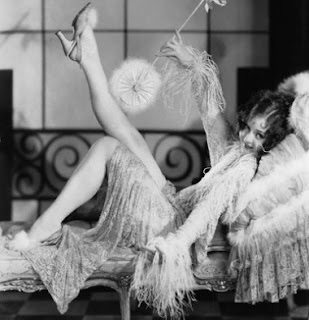 Thank you for that info! I had not realized the Flappers started in Europe. Here is a link to an article dealing with Feminism and your insight into Flappers fits into that scenario. Fair warning: it is an article written from a Christian worldview. Merry Christmas! http://circeinstitute.com/2011/08/what-is-woman-a-re-examination-of-feminsim-the-church/

Hello! Thanks for sharing a stroll down memory lane, and the words from the Atlantic Monthly, which aptly describes the dancing prowess of the "roaring 20's". Virginia Slims would be proud.

Safe and Happy Holidays to you and yours.

the art of learning said...

I'm a 5th grade Social Studies, reading, and writing teacher who's college emphasis was on history. I am your newest member :)

Thanks for that info. I love the "flapper" clothing of that era but never knew the history behind it. I will add your site to my own blogroll, if you don't mind:-)