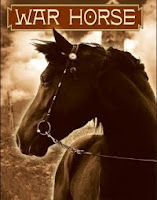 Christmas Day I sat in a very full movie theater and experienced a crowd so moved by what they had watched they cheered and clapped at the end of the movie.    It’s such a rare occurrence.   I think I can count on one hand the times in my life where I’ve witnessed clapping after a movie, but the particular movie I saw deserved it.  I just have to wonder how many of those people realized they enjoyed a story that was originally published as juvenile fiction.

Yes!   The movie War Horse was originally published as a book for young adults in 1982 by Michael Morpungo.

The movie could be summed up by five words – a boy and his horse – but it’s so much more than that.   While the main storyline involves a very special horse and a young man who owns him there are other story lines as well involving duty, responsibility, patriotism, etc.  Morpungo expertly weaves a tale about the horse and various people he meets before and during the course of World War I.
The horse ends up entering the war when he is sold to an English cavalry officer.  From there the horse ends up pulling ambulance wagons for the Germans, living with a French girl and her grandfather, and then has the arduous task of pulling German artillery before miraculously meeting up with his owner again following the Second Battle of the Somme in 1918.

Once the horse entered military service I couldn’t help but think with every new scene how great it would be to use the movie in the classroom to enhance a World War I unit.  The realism of no man’s land, the mud and muck of trench warfare, the gas, the barbed wire, the stories where men from both sides would meet up at times under a flag of truce within no man’s land were all part of the real war.  There are many facets of War Horse that would help students key in on content they have learned in the classroom regarding the Great War.

One aspect of the war I have never taught is the use of horses.   One million horses died on the British side alone.  Most folks learn World War I was the first war with modern technology.  This is true since it was the first war where the tank, motorized vehicles, poison gas, etc., were used, but it was actually a war where warfare was in transition.   Cavalry units were used as portrayed in the movie, and as more and more machine guns were utilized the cavalry units were phased out.  In fact, trench warfare had made the cavalry superfluous.   The Germans had disbanded theirs by the end of 1917.

One of the key scenes in the movie involves a disastrous cavalry charge by the British which was filmed appropriately at Stratfield Saye House in North Hampshire, the estate of the Duke of Wellington who along with his charger, Copenhagen, became famous for their heroic exploits during the Napoleonic Wars.  This site indicates:

Copenhagen and the Duke became synonymous and even in retirement from war they remained together.  The Iron Duke, as he was affectionately known, become Prime Minister of Britain in 1828 and rode Copenhagen up Downing Street to No. 10 to take up his new position of leadership….When the great horse died in 1836, at the remarkable age of 29, he was given a funeral with full military honors.

As technology took over the role of horses began to change.  Since horses were better at traveling over mud and rough terrain many were used for logistical support as many of the scenes in War Horse supported.
Artist Alfred Munnings is considered to be Great Britain’s finest painter of horses, and during World War I he worked as a war artist where he painted many scenes and often worked a few thousand yards from the German lines.

One particular painting by Munnings is titled Charge of Flowerdew’s Squadron 1918, seen below, which portrays what is described as “the last great cavalry charge” during the Battle of Moreuil Wood. Flowerdew’s squadron rode into the fire of fine infantry companies….more than half of the men in C Squadron were killed.   Flowerdew was fatally wounded.


I have a feeling War Horse will be receiving several awards over the next year, and I highly recommend the movie to everyone who wants to see an emotional and interesting movie regarding historical content.

i thank you so much for this nice info...i wish you all the best.

Great review. can't wait to find this book first before watching the movie

Prior to American entry into WWI there were British officers sent to the western states just to buy as many good horses as they could.

I believe in 1916 US cavalry were in action on the Mexican border.

There's a nice Australian film about cavalry in Palestine in WWI called The Lighthorsemen.
The Germans used horses for transport extensively in WWII. In the last 2 years the German army became increasingly demechanised.

Great reminder of the important role that horses and cavalry played in the Great War. So many textbooks focus on the technological advances that were made during that time. I especially like the inclusion of the painting by Alfred Munning. You have definitely given me a new way to look at the Great War and what to incorporate into my teaching. Thanks.

Thanks for that informative article. I love learning things like this. I actually write my own blog on various things like the history and origins of words, holidays, etc.

Another fun fact for you that I've found out through my readings: war horses were usually not named by the soldiers that rode them because they had such a short life. Due to the amount of action war horses saw, soldiers were warned not to get too attached to the horses they rode.

Thanks again for the information. I subscribed to your feed so look forward to more:-)

The idea that cavalry was phased out of the war is actually incorrect. During the stalemates of 1914-1916 mounted cavalry actions did play relatively minor roles. The problem was more of conflicting doctrines and lack of familiarity with how to use the cavalry's advanced training in the British Army than the Cavalry being useless. Haig wanted to create breakthroughs in the front so that the Cavalry could get through and raid and flank in enemy territory, while other generals wanted to 'bite and hold' trench works and some threw away valuable opportunities in their one-mindedness about infantry.

In reality, the British Cavalry were leaps and bounds ahead of other European Cavalry forces, and the equal of the Infantry on foot. The Cavalry were the first to adopt lighter machine guns, the first to learn combined-arms methods that would later be used to such great effect in WWII (including the use of the Royal Flying Corps as both reconaissance and aerial bombers!). The Cavalry were suited to fighting on foot and on horseback, and were used as infantry, pioneers, patrolmen, and a variety of other tasks.

The Battle of Moreiul Wood is not the norm of cavalry in the war. Brigadeer Seely who commanded the Canadian Cavalry Brigade at Moreiul was impetuous and ordered the cavalry into action too fast for their supporting arms - artillery, machine guns, armoured cars, the RFC - to be deployed. That the Royal Canadian Dragoons (who dismounted and fought on foot in the wood) and Lord Strathcona's Horse (it was Lt. Flowerdew's C Squadron who charged) were still capable of turning the German advance on the ridge is testament to the training and the immense value of mobility in 1917 & 1918.

Equancourt and Guyencourt, as well as the Battle of Gattigny Wood were three actions of the Canadian Cavalry Brigade which were FAR more in line with modern cavalry tactics of the war. They included flanking, small units charging German trenches and machine guns, with armoured cars and the CCB's machine gun squadron providing suppressing & diversionary fire while another unit would gallop to the objective, dismount, and then clear the objective on foot. An important thing to remember that the cavalry was trained foremost in small, squadron sized operations rather than the massive divisional sized charges that the Germans and French trained in. The British Cavalry really was far and away the most modern force on the field in 1914-1918.

As an interesting note, machine guns did little against cavalry charges. Pre-war veterinary tests and experience in the Second Anglo-Boer war showed that horses didn't suffer reaction shock to machine gun fire unless it was point blank, or if the round was lucky enough to hit the horse in the leg or a major organ.

Those interested should read David Kenyon's "Horses in No-Man's Land" (2011), or the Marquess of Anglesey's "History of the British Cavalry Vol.8" (1997), which are both fascinating volumes about the Empire's cavalry in the First World War.