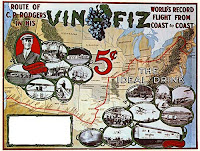 There’s a little restaurant not too far from my home that we frequent for the great steaks and great service.   I usually order an adult beverage before dinner….a little something served up in a martini glass called a Cosmic Grape.   The drink reminds me of a frozen Fanta Grape soda…..not as sweet as a Fanta, but similar.   The last time we were there I ordered my Cosmic Grape and then wondered aloud what might be in the drink so we could recreate it at home.   I assumed it contained one of the new flavored vodkas….seems like every flavor under the sun is offered up these days.

I picked up my hand-dandy smart phone and went online to look up the recipe.   I entered the words “cosmic grape” in the search box.

Guess what I found?

Yes, I found recipes that seemed like they could be my beloved Cosmic Grape, but I found something much more interesting.

My recipe quest was soon forgotten because I found a bit of history involving grade soda and the first transcontinental flight across our country.

The year was 1911 and newspaper magnate William Randolph Hearst offered $50,000 to the first person who flew a plane from coast to coast within a 30 days or less.  This was most certainly a challenge in those days because on average planes flew at 50 miles per hour and only rose to about 1,000 feet in the air.

Calbraith Perry Rodgers was a risk taker.  Perhaps his bravery came from overcoming the fact he was deaf in one year and nearly deaf in the other….due to scarlet fever.   Perhaps his bravery stemmed from the fact he was related to Oliver Hazard Perry – hero of the Battle of Lake Erie during the War of 1812 and Matthew Calbraith Perry – U.S. Navy Commodore during the Mexican-American War, served during the War of 1812, and was instrumental in opening up China to the West in the 1850s.   The family could also trace their family line to the Scottish hero William Wallace.

Knowing his family connections it’s not surprising to find out Calbraith Perry Rodgers became interested in aviation.   He took 90 minutes of flying lessons with Orville Wright and became only one of 49 men who were licensed to fly in 1911.

He took Hearst up on his challenge and set about finding a sponsor to help with the expense of flying a plane across the United States.

Enter another famous name during the early 20th century – J. Ogden Amour – owner and president of Amour & Company.  During his tenure as president the company expanded nationwide and overseas, growing from a small regional meatpacker to the largest food product company in the United States.

Mr. Armour agreed to sponsor Rodgers.   Part of the deal required Rodgers to name his plane after a new soft drink Armour was promoting – a grape soda called Vin Fiz.   The drink was one of several that hit the market at the turn of the century as an answer to temperance movement.  The soda’s name would be painted on the plane’s rudders and underneath the wings.   Vin Fiz was known as “the ideal grape soda”.   Somehow I don’t think it could hold a candle to my beloved Fanta Grape.   I guess I’ll never know…. 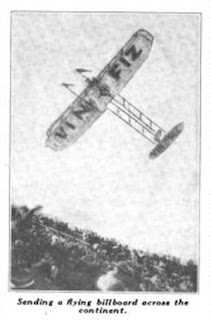 Armour also paid for a chase train to follow Rodgers.  The 3-car support train would be known as the Vin Fiz Special.

Grape sodas wasn’t the only thing promoted on the flight.  Airmail service was also promoted with special 25-cent postage stamps.   They weren’t issued by the Post Office, but they were allowed at the time.   Mail carried on the Vin Fiz also had to have regular stamps, too.   The Vin Fiz stamps were large and inscribed “Rodgers Aerial Post” and “Vin Fiz Flyer”.   There was a picture of the plane on them as well.  Today the stamps are very rare…..there are 12 known to exist today…….seven on postcards, one on a cover, and four individuals.  One sold in 1999 for $88,000.
The flight began on September 17, 1911 taking off from Sheepshed Bay, New York.   Along the way there were 75 stops and 16 crashes….and yes……several injuries.

Sadly Rodgers missed the 30 day deadline imposed by William Randolph Hearst.  His next to the last stop was Pasadena, California where he landed the Vin Fiz in front of a crowd of 20,000 people.  The landing hadn’t been his best leaving Rodgers with a concussion and a spinal twist.   He wasn’t finished though.  He took off again and finally reached the Pacific Ocean landing on the beach and then promptly taxied into the surf on December 10th.   It had taken nearly three months, but the actually flying time amounted to 84 hours or three and half days.

Today the Vin Fiz plane is on display at the National Air and Space Museum.

You can find out more details regarding the Vin Fizz here.

Clive Cussler…one of my favorite authors….penned what has been described as a charmingly nostalgic tale about a pair of ten-year-old twins who get their wish to explore the wide world beyond their parent’s  California farm titled The Adventures of Vin Fiz.   Check it out!
Posted by EHT at Thursday, February 23, 2012

Clive Cussler also has a recent book, The Race, about a cross country airplane race. his detective, Clive Bell, is the main character. Vin Fiz does not appear in it, but it is a great look at early aviation, and a good thriller as well.

Some inaccuracies here. For a full account, see "Flight of the VinFiz" by E.P. Stein (Arbor House, 1985).bedga

Bert, my main source was an "Atlantic" story regarding the flight. I was unaware of the book. There were many of the details I left out on purpose hoping my dear readers would go explore on their own.... Help us out a little regarding the inaccuracies....that's a little vague. Thanks!