On October 2, 1925, the Church Hill section of Richmond, Virginia suffered a great tragedy when a train tunnel caved in at the exact moment a train happened to be in the tunnel.  Several people lost their lives.

It wasn’t long after the cave-in that a story began circulating describing a blood covered creature with jagged teeth.  Huge patches of decomposing skin were hanging off the creature’s legs and arms.  The tale went on to explain how at the time of the tragic cave-in the creature made his way towards the James River and then to Hollywood Cemetery where he was last seen entering the crypt that belonged to William Worthan Pool.

It only added to the story that Mr. Pool’s burial site did not share a birth date…only the year he died….1913. 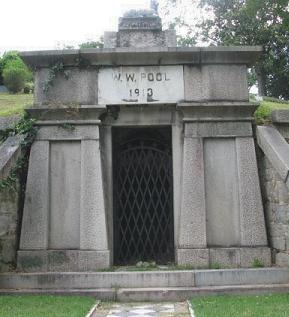 Somehow the story morphed into a vampire story and the tale of the Richmond Vampire was widely told through the years.   Mr. Pool had lived a very ordinary life before passing away at the age of 80. He moved to Virginia in the 1860s and had clerked for many years in one of the tobacco factories in the area and had last been employed as bookkeeper.

Researchers have determined that there was a creature of sorts that day at the cave-in, but he didn’t run off and hide in Mr. Pool’s crypt.   The creature’s name was Benjamin F. Mosby.  He worked for the railroad.   The day of the crash he was working as the fireman which meant he was shoveling coal into the steam tank of the train.   At the time of the accident Mosby was scalded and burned terribly….some sources state “beyond recognition”.   Mosby was taken to Grace Hospital in Richmond.  His burns were too severe though and he passed away the following day.

So much for the Richmond Vampire, but the tale isn’t the only reason why Hollywood Cemetery is one of Richmond’s most popular tourist attractions.   There are many other reasons, too.

I was fortunate enough to bask in the music of Jeff Pike, a personal friend of mine, and Hugo Duarte  as they brought their Frozen Gringo tour through Atlanta along with approximately 30 other people.

There was lots of great music mixed in with great stories.

In fact, one of Hugo Duarte’s stories reminded me about the fascinating cemetery in Richmond, Virginia that overlooks the James River.  The place is so much more than the myth of the Richmond Vampire. It seems that Hugo was in the cemetery late one afternoon after closing time......and he ended up on the wrong side of the locked front gate.

Hollywood Cemetery was established in 1849 from land that had long been known as “Harvie’s Woods.”   The cemetery website states, “The land that is now Hollywood was inherited by  William Byrd, III and was part of his graceful estate, Belvidere, on what is  now Oregon Hill.  After Byrd wasted his fortune on foolish schemes [sounds like a good story there] his land passed through Bushrod Washington and Lighthorse Harry Lee to Colonel John Harvie.”

The name….”Hollywood”…came from the number of holly trees scattered about the property.

There are so many people buried at Hollywood…important people…historical figures. such as President James Monroe and President John Tyler as well as the only President of the Confederate States of America….Jefferson Davis.

….and then there ARE the 25 Confederate generals resting at Hollywood along with 18,000 Confederate soldiers (see this link).

There are many stories regarding all sorts of sightings of spirts at the cemetery along with the eerie feeling many advise they get while on the property.

Hugo Duarte is no different.  His song….Hollywood…recounts his own visit to the property....after regular hours.    In 2007, he sang the song for General Pickett’s birthday along with Eddie Pickett.

Hey, boys this is Hollywood.  It ain’t home, but It’s home for good.  We’d walk away from here if we could…never come back again.

And later in the song…..

Then General Pickett strode right up to me and in a troubled voice he said, “Ya’ll ain’t learned a damn thing from history….”

Take a listen for yourself…..


I’d have to agree with General Pickett.   We haven't learned anything...yet.

You can see future Frozen Gringo tour dates here.  If you are close by one of their shows I strong urge you to attend. :)