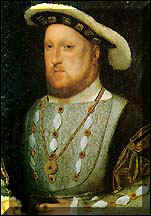 Jay Leno has made his “history test” a regular feature on his show. He supposedly chooses people at random (I wonder if it’s all planned) and asks them various questions on historical topics. It’s amazing and embarrassing what people come up with for answers. Society has several reasons for the public’s low retention rate of historical information. Some say it is the teacher’s fault for teaching straight from the text and it’s just too boring. Some say curriculum has been watered down while others say the curriculum is too rigorous. Some say too much emphasis is put on certain events in history such as the American Revolution and the Civil Rights era while ignoring whole sections such as the War of 1812 or the Korean War.

Well, it seems that the United States isn’t the only country who has citizens who are illiterate as far as historical data. The Brits are easily confused as well according to Alan Coren in his article “How Henry VIII Lost the Battle of the Bulge, and Ofsted Went to War” published in The Times (December 28, 2005). You can see the entire article here. The Chief Inspector of Schools in Ofsted claims that students in Britain are historically illiterate because the curriculum over emphasizes the Tudor Era and World War II and that students are unable to remember key dates or major events.

The article goes on to quote the answers students used on their end of term tests. From this Coren determines the Chief Inspector of Schools may be correct. Here are some of the more entertaining answers:

It was Richard III who got the Tudors started, by losing the Battle of Britain. The poor sod never stood a chance against the House of Lancaster once it had invented the four-engine bomber. Also, his Scandinavian allies let him down fatally by staying neutral so’s they could make ball bearings for both sides. His last words were: “A Norse! A Norse! My kingdom for a Norse!”

The reasons for her remaining the Virgin Queen were that the only two blokes to get anywhere near her were Essex and Raleigh. She turned the first one down because it was better to be called the Virgin Queen than the Essex Queen. She turned the second one down because, although he got rich after inventing the bicycle, he was stingy, and only ever gave her fags or chips, neither of which she could get the hang of. Chips made her cough.

The Dam Busters raid was led by Wing Commander Sir Francis Drake, who got the idea for a bouncing bomb during a game of bowls at Plymouth Argyll. The bombs were built by Wallis Simpson, aided by Gromit, but one went off accidently before the raid and killed Drake’s dog. I know the dog’s name, and would like to get an extra mark for writing it down, but I am not allowed. Can I get an extra mark for saying that Sir David Frost is remaking the film of the raid? I do not know much about the new script, except that when the Lancasters arrive over the Ruhr Drake chucks open his cockpit window and shouts at the Germans: “Hallo, good evening, and welcome

In the reign of Henry VIII, the second most important man in England was Cardinal Wolseley. He not only invented the police car, he also designed the engine for the Churchill tank. This was to play a major part in the Battle of the Bulge, so called because Henry VIII, who had originally planned to lead the English armoured brigade into battle, made the mistake of having lunch first, and was unable to squeeze himself through the hatch.

They are the six wives of Henry VIII. After the fall of London, he took them all up on the roof of his Hampton Court bunker and shot them, to stop the Russians giving them a seeing-to.

Notice the mangling of details between the Tudor era and World War II. At least these students made an entertaining effort instead of writing “Beats me”, “I don’t know”, or the ever popular sincere apology. “I’m sorry Mrs. Elementary History Teacher. I didn’t have time to study.” I would be tempted to at least give students points for creativity and for effort though. Note I said tempted….not that I would.

At the fourth grade level students write about the content they are learning. I do this to emphasize to students that writing is not just for Language Arts. I also feel that by writing about what they are learning they can make connections on their own and retain the information better. At their level I have to give them lots of support and usually have to give them a strong idea of where I want them to go. We do a lot of writing together in the beginning before I can release them to compose on their own simply looking at their notes. I don’t test using the essay format. Most of my testing is multiple choice and short answer response. I sympathize with the high school and college level educators who do need students to construct elaborate responses to questions like those above. Recently in a post titled “I Love My Job But…”, A History Teacher advises about the extraordinary amount of time it takes to grade student essays. Twenty plus hours! My hat is off to you. I spend many hours grading papers but grading compositions is extremely tedious even when I devise a rubric.

As a history teacher and especially one that introduces the discipline to students I am bothered by mangled history. How does it happen? Why does the public have a collective dislike for the subject? My students seem enthused so at what point does apathy take over? I need to ponder this more.

In my class we do a game called "Jaywalking". A version of Jay Leno's history game. I ask them random history questions from our current lesson or just things they should know. Last week one of my questions was "What number president was Ben Franklin?" I got complete silence for what felt like a millenium until a kid across the room yelled "HE WAS NOT PRESIDENT DUDE"

Great Post! Lets not forget the "Disney" version of history either and its role in keeping our kids from learning what really happened.

It would be interesting to find out which country has the most educated population for knowing the history of their country and the world.

That would be interesting to research. Ok, who out there will fund our research, Polski?

Disney...don't get me started. Every year I have to debunk the Pocohontas movie. I always have kids who ask me things like, "Why did they sing so much back then? People don't sing like that anymore?" "Did she really have a racoon friend like in the movie?"
Oh....my....gosh! Also since I teach in Georgia I have to deal with the Cherokee Princess myth. Everyone whose family has resided in Georgia since colonial times have passed along the myth that their families are 1/4 Cherokee and they are related to a Cherokee Princess. I have at least 12 little girls every year who can't wait to share this with me. Full blooded Cherokees have verified for me that they did not have titles such as princess.

Hi there, just wandering the blogosphere and I found your blog. I really enjoy how this all works.

This is one to watch.