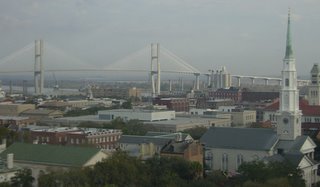 I recently returned from my all time favorite city in Georgia.....Savannah. Savannah is the first city of Georgia. It is the spot where James Oglethorpe came ashore in 1733 with 114 settlers to begin the Georgia colony. Of course, Oglethorpe's experimental idea of a debtor colony would eventually fail as greed took over, but it was a noble idea. Savannah is where Forrest Gump and Midnight in the Garden of Good and Evil were filmed. The city where anything is accepted....as long as it's done politely.

I was in Savannah with a few of my colleagues to attend the GCEL Conference. GCEL stands for Georgia Compensatory Educational Leadership. The group supports Title I funding and promotes the success of various Title I programs such as ESOL and Remedial/Intervention type programs. Various schools present strategies and programs they have found success with. I feel we represented our school and the money spent to send us to this conference well. We split up and we each attended 8 presentations in two days for a total of 24. I have been busy preparing a powerpoint to present our information we gathered to our faculty at a meeting tomorrow.

Savannah has always been a favorite place of mine to visit. I get excited knowing I can walk on the same spot where Oglethorpe first landed at Savannah and where he pitched his tent as he was marking off the simple square design of what would become the first city of Georgia. I can walk by the very balcony where LaFayette spoke to the citizens of Savannah. I can eat at the Pirate's House which was once a nefarious tavern where pirates hung out. It is believed they d used underground tunnels to smuggle kidnap victims out to their waiting ships. I can take a carriage ride past some of the beautiful squares of Savannah and walk down the cobblestones of River Street. While on River Street I can dine in a converted cotton warehouse that is 270 years old while I watch modern cargo ships several stories high sail past heavily laden with cargo containers.

The powerpoint I prepared for the faculty meeting is pretty good. I filled it with our data plus padded it with pictures we took of each other and some of the sights we saw. I showed it to my homeroom today and discussed all of the places we saw and their significance. They were most interested in the picture I took of the candy store on River Street since I bought them saltwater taffey there for them. They were also fairly disinterested in the picture I had of Armstrong House until I told them that the owner of the Georgia Bulldog mascot, "Uga", is a partner of the lawfirm that is housed in Armstrong House today. No, I didn't get to see "Uga", but I was just steps away.

We had just finished up our colonies unit before I left for the conference so I was able to actually show them many of the things I had previously told them. It made for a nice impromtu history lesson.
Posted by EHT at Monday, February 20, 2006

Savannah is a great city!
The last time we were there I while I wife was in business meetings I spent 2 or 3 days at Bonaventure Cemetery.