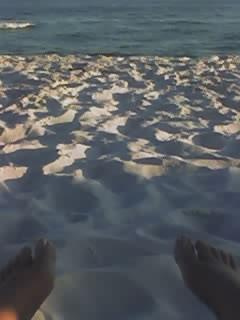 As the picture confirms I’m still maining my claim on the beach. Day two and I am settled into my lounge with umbrella, Coke (a good Southern girl never goes anywhere without the elixir of life), cell phone, and plenty of paper and pens.

All is right with the world…..

The beach is busy this morning---not with people but with the business of being a beach. Small, greyish-white crab-like creatures scurry here and there diving into holes in the sand before my poor “graded too many papers in my lifetime” eyes can focus in on them clearly. I mimic their actions as I scurry from spot to spot camera phone open attempting to snap a picture. I hope Daughter Dear isn’t watching her crazy mother from the balcony of the condo. I finally give up leaving the minute creatures their solitude.

It’s right before noon….the sun is still a bit to the left. As my gaze pans from east to west I see a long column of condo buildings as far as the eye can see running parallel to the white ribbon of beach and the blue-green of the water. Along with a long stretch of condos to the east is the Alabama-Florida state line or Floribama as the locals call it.

Directly in front of me looking out towards the horizon I see an expanse of what appears to be huge silver sequins winking and twinkling at me as the sun catches each little ripple of the water. Various kinds of boats dot the horizon here and there. To the west the water reverts back to the blue-green, semi-transparent depths. Empty lots complete this end of Perdido Key and are dotted here and there with sea oats stretching down towards the jetty. Occaisional trios of pelicans soar by on the prowl for tasty morsels.

If I remain patient, vigilent, and by fixing my gaze on one section of water at a time I am rewarded with the occaisional water ballet that mini-schools of small, silvery fish perform as they come in close to shore turning this way and that. The sun shines through the waves as they curl one last time to reveal brown seaweed churning in the water. A small boat motors across and as it reaches me a wave curls. For a split second I’m able to see a large fish swimming inside the wave parallel to the boat. It’s just a dark shadow but it’s a three to four foot long shadow. Is that a triangle-shape fin sticking up along the top edge of the creature? Hmmmm….I wonder if the mighty fishermen realize their prize catch is only a few feet from their deck. I think of Dear Husband. He’s been out since 5:30 a.m. on a charter boat with twenty other manly men from our church. I hope he’s having a good day and the fishing/seasick gods are being benevolent to everyone aboard.

The waves are pounding today----much larger than yesterday---more distinct clouds and a steady, steady wind. I have to fight my favorite writing tool….the spiral notebook….to keep it steady as I perch it along the handrail of my lounge.

The birds see something in the water. They are literally belly flopping into the surf diving straight down like Kamikazee pilots except they are able to crash into the water and careen right back up in the wild blue yonder proudly munching on their catch.

A large…..wrong word……a giantic bird has landed in front of me. I freeze. He....she turns around and looks my way. I mean I think he/she is looking at me. How can you tell since the eyes on the side of the head? I begin to think about my exit strategy if gigantic bird begins to come my way. This took some thinking since my “I’m not overweight just undertall” body does not always move quickly in the most graceful manner. Two groups of people walk by. You would think gigantic bird would get nervous and fly off. He/she just kept gazing out at the sea totally ignoring me and the folks passing him by. Finally he/she begins to flap and transports his/her body from the left of me to the right of me where he/she continued his/her sentry duty over the water. This continued for about five minutes before he/she finally just walked on down the beach. Just another tourist…..at least speedos weren’t involved.

As the afternoon wore on I watched the sun slowly slide on down the other side of the sky. The huge silver sequins that winked and twinkled at me earlier are also moving further and further to the west. Occaisionally a fish flips up out of the water for an instant and slides back in. I began to see gangs of dolphins swimming towards the jetty. They gave me my own personal floor show as they literally jump in and out of the water as they sail by. Wow, who needs Sea World?

Star Trek begins with these words, “Space….the final frontier.” I beg to differ with Captain Kirk. Here I sit on a fine line between the edge of a continent and a great abyss. Space is fine. I get it the need for space missions but I think even with all of our technology we have lost the determination needed for that next great discovery or accomplishment. The Cold War fueled our desire to win the space race and now it’s over and our desire has cooled. We also don’t seem to have that same collective drive or spirit as it were to have a major accomplishment. What has been the greatest space news lately? Some yahoos (and not even a full compliment of yahoos) decide Pluto isn’t a planet. It’s disheartening.

The oceans are where it’s at. This is where we should focus our attention. I sit here and look at the edge of a world we are aware of but yet we still know so little.

….and another day ends

…. and I still maintain my claim. Which makes me jealous. Just. Jealous.

Enjoy the rest of your time at the beach! :-)

I sure could use a few days at the beach--please enjoy the rest of your stay!

Sometimes I think that being a lawyer is like being a builder. Often, a builder’s own house is full of jobs that need to be done. These jobs are, in fact, destined never to be done, because a builder spends all day building other people’s houses and cannot find the energy to apply hammer and nail march madness in his own domain. Instead, when he gets home he cracks open a lager and watches the football, or, if he is a politically correct sort, reads Pablo Neruda and cooks his partner (male or female) a meal. In short, he does anything to avoid being a builder once his identity as such has evaporated behind closed doors.
http://www.enterbet.com