Yet Another School Tragedy 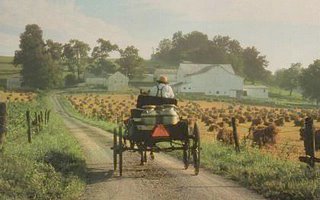 My heart aches for the Amish people.

I see in the Amish the original promise of this great country of ours…a land that serves as a haven for the persecuted, the down-trodden and simple folk who just want to live according to their religious beliefs. Aren’t those the very reasons why so many of our ancestors arrived on these shores?

Though they do put up with being made into a side-show from time to time as we venture into Amish country to observe them in their daily lives the Amish continue to maintain their beliefs, their traditions, and their simplicity in a world that has gone stark raving mad.

It’s amazing to me that the Amish have been able to live for so long maintaining their strict, simple lifestyle amidst a technology laden world. They don’t try to push themselves on anyone. They don’t tell us how evil and wrong we are. They simply want to lead their lives. We should treasure these people, honor these people, and protect their right to live as they choose. Religious freedom is the one ingredient the majority of the thirteen original colonies were founded on.

Even in the midst of this terrible, terrible tragedy we see a group of people remain steadfast to their religious teachings expressing forgiveness to the terrible, terrible demon that invaded their school building yesterday. The few that have spoken on camera or whose comments have been relayed to us via a reporter express forgiveness, express God’s love for all people, and express that even this terrible tragedy was God’s plan.

Could we “English” as they refer to us act in the same manner?

What is incomprehensible to me is the fact he killed others. If he were that tortured of a soul, he could have done the world a favor and snuffed himself out. Instead, he chose to kill others.

What Mike said is exactly what I've been saying the last few days.

My students are outraged about this happening to the Amish, people who keep to themselves. Some of my students don't understand the Amish lifestyle, and she when we explain it to them, they become outraged by the whole situation, too.

It is truly ironic that this is not how THEY care/believe they should react. Very interesting.