1. John Rae was a surgeon and Scottish explorer of the Canadian Artic. Between 1848 and 1854 Rae set out to find Sir John Franklin who disappeared along with his crew during an artic expedition. During his search Rae mapped over 1400 miles of coastline and proved King William Land was actually an island. Eventually Rae met up with some members of an Inuit tribe who informed him Franklin and his crew had died of exposure and starvation.

2. Jean Nicollet was a French explorer. He traveled through the Great Lakes region and lived among Native Americans for many years in what is today Ontario, Canada.

3. Henry Kelsey (his picture is seen above) was also known as Boy Kelsey because he was a mere boy of 17 when he began exploring Canada. In fact, he was the first inland explorer of the Canadian region for the Hudson Bay Company, and the first European to see the praries of Canada. Kelsey met with many Native American tribes and negotiated trade agreements that increased the profits of the Hudson Bay Company.

4. Panfilo De Narvaez was a Spanish sailor and explorer who helped to conquer Cuba in 1511. He led an expedition to North America where he landed on the western coast of Florida near where Tampa Bay is today. Unfortunately he died in Florida one year later.

5. Antoine de Cadillac was French and would have probably listed explorer, soldier, and leader on his resume. He founded the city of Detroit in 1701 and later served as the governor of Louisiana from 1710-1716 or 1717.

6. Gaspar Corte Real was a Portuguese explorer who sailed to Greenland in 1500. He may have

reached Newfoundland, but was lost at sea in 1501. Unfortunately his brother, Manuel, was also lost in an attempt to find Gaspar.

7. Sir Martin Frobisher was an English privateer which is a politically correct way of saying he was a British government sponsored pirate. His picture is to the left. For many years Frobisher sailed to northwest Africa and then attacked French ships in the English channel. Later on he become one of the many explorers who sailed to North America in search of the Northwest Passage.

8. David Thompson was a Welsh explorer who traveled over North America including western America and Canada. He explored the full length of the Columbia River. His detailed maps of North America became the template for ones that followed. From 1797 to 1798 Thompson sailed down the Missouri River.

9. Sabastian Cermenho was Portuguese by birth but explored for Spain. He was not only a soldier and navigator….he was also a historian. He chronicled the Spanish conquest of Mexico in his book, The True History of the Conquest of New Spain, in 1568. Cermenho first traveled to North America in 1514 as a soldier with Pedrarias Davila, the new governor of Darien. He also sailed with Cordoba, Grijalva, and Cortes.

10. John Hawkins, seen below, was an English naval officer, slave trader, and privateer. He was also the cousin of Sir Francis Drake. In 1562 Hawkins sailed to the Spanish West Indies to trade Guinean slaves. He was the first English slave trader and fairly successful at it. The Spanish were none too pleased about an Englishman eating into their profits and when Queen Elizabeth I sponsored 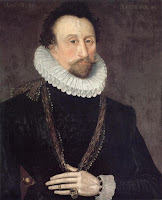 Hawkins’ second and third slave trading ventures it was just one of the things that finally sparked the war with Spain. You may have heard about the defeat of the Spanish Armada in 1588. Hawkins can be thanked for thinking up the strategy of blockading Spanish ships at the Azores and he also had something to do with looting of treasure laden ships flying the Spanish flag.

11. Baron Alexander Von Humboldt was from Prussia. He explored Center and South America along with French botonist Aime Bonpland. He explored Venezuela, Peru, and Ecquador, and sailed down the Amazon and Orinoco Rivers. Along the way Humboldt and Bonpland collected plant, animal, and mineral specimens.

12. Juan De Fuca was also known as Apostolos Valerlanos in his native Greece, but he explored for Spain. He also searched for the Northwest Passage but he sailed up the western side of North America from Mexico to Vancouver Island. He located a strait which today is named for him. De Fuca was convinced the strait was actually the waterway that led to the Atlantic Ocean.

13. William Dampier was a British pirate, explorer, and map-maker. As a teen he began travels to Australia, New Guinea, southeast Asia, and the Southseas charting rivers, inlets, coastline, and the water currents. He published a book titled A New Voyage Around the World which published in 1697 that described native cultures, other discoveries, and the first noted typhoon.

Cool! I was a history teacher and only heard of #10 and #13! Thanks for the information! I love history!

I'm afraid I don't know them, but I like what you tell us about them. Thanks for teaching me!
My TT shares 13 things about Mabon.

There aren't many opportunities for your enterprising pirate these days.!

I vaguely recall learning about six of them! Guess I have some Wikipedia reading to do! :O

I knew of many of those Canadian explorers, being from the great white north myself. I did a lot of research on the Voyagers, Hudson Bay Company and exploration of the artic for a book I am currently working on. It's fascinating learning about explorers.

Great TT. Mines about Haunted Ontario, 13 of some of the most haunted sites in Ontario.

I'd come across a couple of them before but not most of them.

Wasn't Rae part of that expedition that the book White Dawn was a fictionalized account of? That was a fantastic book, by the way. I highly recommend it.

I'm learning so much with these TT's This is my first week. We have a strait of Juan De Fuca in Washington that leads out to the Pacific Ocean...

I love stuff like this -- and to be honest, I didn't know a single one! Thanks for the info, that was really interesting!
Happy TT!

I wonder how the founder of Detroit became the Governor of Louisiana.

I love history and do a 'this day in history' each week on my blog. it's easy now with the internet, you know? I just google a date and any number of historical events can pop up. Very Fun. Feel free to scroll down if you visit my T13 and check out my latest history date. September 17th.

Not a one. That's a bit sad. But also why I love Google. I can look them all up

I love this blog because I love to learn something. I knew a few of these, and several of them rang a bell, but I was sad that I didn't know more of them.

I love your lists, I always learn something new here. I'd only heard of a few of these explorers.

I must confess to never having heard of any of them, not even the Welsh explorer, David Thompson. He was never mentioned in the Welsh history I was taught at school.

How cool. I remember learning about Nicollet, but it's probably because I live on the great lakes :)

YOu are so right . I have not heard of any of them

my 13 is up on
http://momworksathome.blogspot.com

WOW!! I learned something new today. Thank you.

Great list! I had only heard of two - or at least that's all I remember.
Have a great day!

Very informative, I love this stuff. I linked to you from 13 PETA Poses, Excerpt: PETA is a detestable, wacko organization, but I love those who protest for PETA by going fur-less. Is there a better way to protest?

Herewith, for your viewing pleasure are 13 images of protesters who have bared it all in their effort to convince you to stop wearing fur, eating meat or fish, and torturing animals.

Alasandra, The Cats and Dogs said...
This comment has been removed by the author.
5:32 PM

I knew John Hawkins, but the rest were new to me. Thank you for an educational TT.

My TT about the Mississippi Mound Builders is up.

Sir Martin Frobisher-- what a perfect name for an undercover guy!

I'm a kind of explorer myself, with deeper perception, but all explorers fascinate me, so thanks for posting.