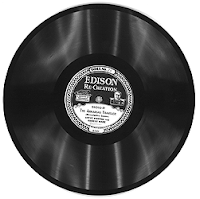 Did you know the Library of Congress has a blog. You can find it here.

The National Recording Preservation Board, part of the Library of Congress, has released their 2008 list of recordings added to the LOC collection to maintain and preserve sound recordings and collections of sound recordings that are culturally, historically, or aesthetically significant, and for other purposes.

The entire list of the 2008 Registry can be seen at this link, but I’m presenting my favorite 13 of the 25 below.

If you don’t have Real Player you might want to download it to hear the clips. My mind is already turning over how these clips could be used to teach certain aspects of 20th Century history.

1.“At Last!,” Etta James (1961) ….Etta James’ recording of “At Last” is widely acknowledged as a “crossover” masterpiece…Her sultry, blues-inflected approach to “At Last” -- set in a brilliant strings and rhythm section arrangement by Riley Hampton -- transcends genre, like all great crossover interpretations.

4."The Who Sings My Generation,” The Who (1966) ….On their first album, The Who, assisted by The Kinks’ producer Shel Talmy, laid down a set of tracks that would include both enduring classics and mainstays of their later concert performances. Pete Townshend penned the rebellious title track, “My Generation,” which features John Entwistle playing one of the earliest bass leads in rock.

5.“No News, or What Killed the Dog,” Nat M. Wills (1908) …This recording captured a gifted monologist at his best and became one of the most popular performances on early records. The “No News” monologue, with roots in oral tradition, was one of vaudeville’s most famous and often-copied routines

6.NBC Radio coverage of Marian Anderson's recital at the Lincoln Memorial (April 9, 1939) ….By 1939, Marian Anderson had been hailed as the greatest contralto of her generation, yet she was refused the use of Constitution Hall in Washington, D.C. because she was an African-American. The ensuing controversy climaxed with her historic recital on the steps of the Lincoln Memorial on Easter Sunday, 1939. There she sang to an audience of over 75,000 people, with a national radio audience of millions more. Though brief newsreel excerpts of her brilliant performance have become familiar and even iconic since that time, the contemporary impact of this live, continuous radio coverage cannot be underestimated, and it is now our most complete documentation of this key event in the struggle for civil rights.

7.“A Child’s Christmas in Wales,” Dylan Thomas (1952) …Part nostalgic childhood remembrance and part poetic incantation, “A Child’s Christmas in Wales” was issued with five of Dylan Thomas’ poems on Caedmon Records’ first release. According to the label’s co-founder Barbara Holdridge, Thomas arrived in the studio with insufficient material to fill an entire LP, but he remembered writing a Christmas story for Harper’s Bazaar. Holdridge and her business partner, Marianne Roney, were able to identify the piece as “A Child’s Christmas in Wales” and obtained a copy from the magazine. It became one of Caedmon’s most successful releases and has been credited with launching the audiobook industry in the United States. “We had no idea of the power and beauty of this voice,” Holdridge said of Thomas’ reading, “We just expected a poet with a poet’s voice, but this was a full orchestral voice.”

8. “West Side Story,” original-cast recording (1957) …While there are over 40 recordings of the score to the Broadway show “West Side Story” in various languages and styles, the original-cast recording is in many ways unequaled. The orchestra was increased to 37 for the recording, but the performances of this rich score are visceral and passionate. Bernstein’s music—with its Latin, jazz, rock and classical influences—was arguably the most demanding score heard on Broadway up to that point.

9. “Rumble,” Link Wray (1958) ….Asked for a tune that kids could dance “The Stroll” to, Link Wray came up with this powerfully menacing guitar instrumental on the spot, and the crowd went wild, demanding encores. When he couldn’t recreate the distorted sound of his live version in a studio, Wray poked holes in his amp speakers, cranked up the tremolo, and was then able to capture what he wanted in three takes -- for a cost of $57.

11. “Tom Dooley,” The Kingston Trio (1958) ….The Kingston Trio recorded their version of “Tom Dooley” on their debut album for Capitol Records in early 1958. The song was already part of their regular set list and was also in the repertoire of other folk revivalists such as the Tarriers and the Gateway Trio. In spite of Dave Guard’s distinctive and dramatic opening narration, the song attracted little attention on its own until a Salt Lake City radio station began playing it heavily, prompting Capitol Records to place an 1866 murder ballad on a 45rpm record for the teenage market. This sparked a modern-folk revival, the influence of which would be felt throughout American popular music.

12. “Night Life,” Mary Lou Williams (1930) …When a record producer asked for an impromptu solo piano performance, 20-year-old Mary Lou Williams created an original three-minute collage of stride, ragtime, blues and pop styles that summarized the art of jazz piano to that time while pointing to the future of that genre and her own career in it. At the time, she was a pianist, composer and arranger for Andy Kirk and his Twelve Clouds of Joy, one of the great jazz bands of the Midwest. She later said that thoughts about the nightlife of Kansas City had driven this composition.

13. “Sinews of Peace” (Iron Curtain) Speech at Westminster College in Fulton, Missouri, Winston Churchill (March 5, 1946)…. The LOC site did not provide a link to the audio file. Here is one to a YouTube video. Lamenting the deepening shadow of the Soviet Union’s occupation of Eastern Europe and fearing Soviet-directed, fifth-column activities in the West, Winston Churchill delivered this opening salvo of the Cold War at Westminster College in Fulton, Missouri. The speech heralds an increasingly widespread feeling in the West that a tougher stance was needed toward Russia, a departure following the positive image that the country enjoyed as a wartime ally in World War II. Churchill famously pronounced that “From Stettin in the Baltic to Trieste in the Adriatic, an iron curtain has descended across the Continent.”

View some of my other Thirteen posts here.

See what other bloggers are posting about by visiting the Thursday Thirteen hub.

Great post! For more multimedia classroom resources, check out RemixAmerica.org! This non-profit site allows users to remix historical footage with current events to make comparisons and put their own spin on American history and politics today.

We took the kids to the Rock and Roll Hall of Fame Museum (didn't make it into the Hall. Not if we wanted to attend the induction ceremony that night) and I was explaining to the kids how music has shaped our times and culture.

They're a bit young for the lesson, but it's a start.

What an amazing wealth of information from the Library of Congress! So very cool!

Hope all is well with you. Been trying to finish up the school year here so I will go back to blogging once I'm out for summer break.

The Tower of AION said...

The Tower of AION