Millard Fillmore Was A Know-Nothing 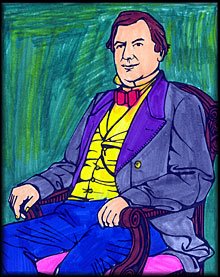 I write the following sentence on the board: Millard Fillmore was a know nothing. I ask students to tell me what the sentence means.

Another comment is added. “That guy, Mil-, Mil-. That Mil- guy doesn’t know nothing.” I ignore the grammatical error. At this point it will just confuse them.

I try to turn students in another direction. “What are nouns?”

Someone regurgitates “Words that name people, places, ideas, and things.”

I counter with, “What’s our strategy to find nouns?” Several seconds go by. I hold up my board marker and point to it. Several hands go up.

“We look for noun markers like the words a, an, and the.”

“Good, take a look at the sentence again. What do you see?”

“Yes. So is Millard Fillmore stupid?”

“No, somebody is calling him a name.”

“What else do you notice about the words “Know” and “Nothing”?

After several tries someone tells me that the words are capitalized. I counter with a “So what?”

A show of hands. I choose someone. “Know-Nothing is a name for something.”

I end our little language arts episode by telling students that Millard Fillmore was our 13th president and he was a member of a group called the Know-Nothings. I tell students their goal during the lesson is to determine how Fillmore became a Know-Nothing and what the group represented.

Would you like to find out what we learned? Head on over to the American Presidents blog where I posted the rest of the story. You’ll have to scroll down past the part you’ve already read.
Posted by EHT at Tuesday, March 28, 2006

It is probably best to link to http://american-presidents.blogspot.com/2006/03/millard-fillmore-was-know-nothing.html rather than the base url for the American presidents Blog. If someone clicks on this 6 months from now, they will have to dig to find the Fillmore post as it will no longer be on the front page.

This is just my quick way to get you this note.

I remember that lesson. I swore I'd never get caught with that line again.