Out of all the historical content I have shared with students over the years the content that I find most satisfying to share with them is the information and activities I present regarding how our government came to be and how it works.

As citizens we are all about our rights….in fact, these days it seems we all overdose a little about what government should be doing for us. We often forget that an important aspect of being a citizen of the United States involves not just having a laundry list of rights….that list includes responsibilities as well.

YES! There are things that WE….we the people are supposed to do in order for our government to work right.

A few years ago I was required to not only teach a few social studies classes I was also slated to teach two science classes. It was a change of pace, and I really ended up enjoying overseeing units regarding sound, small machines, and space. I infused each unit with lots of hands-on opportunities including plenty of chances for movement. One of the lessons that I loved the most was where students actually took the job of a planet or other heavenly body and formed a human universe. Anyone visiting our back parking lot that day would have seen total chaos as a group of students whirled around another student in the middle of the group as he moved his arms to mimic radiating the light of the sun out towards Earth and beyond. Every planet-person revolved around the sun and every planet had a moon or moons revolving around it as well while some students observed the action. Then of course, we had fruit basket turn over as some students came out of the mix to observe or changed jobs to get a different perspective.

We created a parallel universe….a model….so students could experience a little part of it.

My handy on-line dictionary tells me that the word parallel can mean anything having the same direction, course, nature, or tendency….it can be something identical or similar in nature.
I have come to find that parallels in content delivery are key to provide those hands-on opportunities that students need to experience content and to develop a true grasp of the concepts we are attempting to teach.

So, I’ve often thought how wonderful it would be if I could develop a parallel-type government project to help students grasp American government, but how to do it? How to manage it?… and basically as the adult in the room…..how to control it?

Of course, I’m looking for a parallel activity, so what else would it be????

Parallel is a book written by an author from my neck of the woods by the name of RaeMichael. It is a book of fiction regarding a group of college students who are handed an extra credit project by their political science professor.

The group decides to set up a parallel government of the United States using the U.S. Constitution as their guide. Imagine that!

As the project….named the “New” United States of America….begins the first order of business for “Congress” is to pass a resolution to Reaffirm the Superiority of the Constitution requiring all laws and resolutions must be reconciled with the U.S. Constitution prior to consideration. Other actions of the “New” United States of America include holding politicians accountable for the promises they make, and campaign reform and the lobby process are also addressed.

I’m excited about the book because I can see the value of using it with upper elementary, middle, and high school students to interject another source into a teaching unit for government. I can see myself using the fictional book as a read aloud to serve as a springboard to ask students to set up a similar experiment…..allowing students to set up their own living, breathing, working “new” American government. Parallel provides opportunities for analysis and great pro/con discussions regarding such innovations in government as banning all lawyers from political service….yes, I know….a highly controversial subject.

Rightly so….government is meant to do some things while it is also meant to stay out of other areas. This book takes an honest look at all aspects of government, and I recommend it highly.

You can visit the author’s website and purchase the book here.

Students and THEIR Labels

One of the things that continually have the bees in my bonnet buzzing is the issue of clothing and students.

No, this is NOT the post where I opine about the serious lack of clothing in American classrooms nor is it the post where I profess to be astounded concerning the large amount of cleavage I see at the local high school. I’m not even going to write about how most school hallways resemble a plumber’s convention due to the amount of rear ends that wink at me.

My point this time is the emphasis children place on particular brands of clothing – Abercrombie, Pacific Sun, American Eagle, Hollister….

However, the difference is while I like certain brands of clothing I don’t alienate folks if they don’t wear the same thing as I do….I don’t call them names…..I don’t belittle them publically. Wear what you personally want to wear…..I do.

Unfortunately, students can and do alienate each other, call each other names, and belittle them publically.

This type of activity can undermine our number one purpose….learning.

Every few days I invite a student to join me for lunch…I don’t do this alphabetically because it would be too predictable, but I do make sure that every student is invited each nine weeks. I ask the student to get his or her tray and join me back in the classroom. We talk about all sorts of things. I ask the student about his or her life at home, likes, dislikes. We often discuss television shows including cartoons.

This provides an opportunity for me to build relationships with students…..students that are my problem kids…..kids that are the stand-out stars….and kids that I might not ever even know they were in the room unless I invited them to lunch.

Occasionally during these lunch dates a student will let me know if he or she is having issues with other students. This is usually when I find out I’m having a major clothing issue….a clothing bias can cause enough of a disruption to hinder the learning process.

This is when our normal studies come to a screeching halt, and we take a side road through fashion in history. We might research the fashions of the time period we are studying or, I might choose a short story I can read aloud to student and then ask them to illustrate what they think the characters in the story might be wearing depending on the clues given in the story. Students have to analyze the possible time period and the character’s actions to come up with a plausible costume. These activities also get students to discussing clothing choices and how they make and DON’T make a man.

From time to time one of the activites I use involves the Presidents of the United States. Some of their clothing choices were interesting, and speaking of labels……one label that is often repeated is the Brooks Brothers label. Follow this link to my newest posting at American Presidents titled All the President's Clothes... where I discuss how the Brooks Brothers label has been involved with the executive office since the early 19th century.
Posted by EHT at Monday, September 21, 2009 15 comments

On this day in 1787 the United States Constitution was signed, however it was not until 2004 that an official observance was recognized by Congress. Prior to 2004 the day was celebrated as Citizenship Day.
The law which officially recognizes today as Constitution Day provides that any U.S. public school receiving federal funds must set aside a portion of classroom instruction specifically for teaching the history of the Constitution.
Here are some fun facts regarding the Constitution:
1. The U.S. Constitution Center advises our Constitution is the shortest and the oldest Constitution in the world.
2. The Constitution located at the National Archives in Washington D.C. was hand written by Jacob Shallus. He was an assistant clerk to the Pennsylvania General Assembly and was paid $30 for his touble.
3. Our Constitution was NOT the first plan of government for the United States. The Articles of Confederation failed miserably and necessitated the meeting of the Constitutional Convention to form a new plan.
4. Most people refer to the influence of John Locke when discussing the formation of our Constitution, but Monesquieu’s influence should not be overlooked. He discussed the need for balanced forces pushing against each other referencing Polybius, a 2nd century BC philosopher who discussed checks and balances.
5. Over 10,000 constitutional amendments have been introduced in Congress since 1789….only 27 have actually gone through the entire amendment process.
The U.S. Constitution is one of my most favorite topics to teach about….Since 2006, I’ve written about it several times here at History is Elementary. You can see those postings here.
Posted by EHT at Thursday, September 17, 2009 0 comments 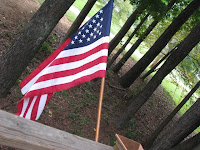 Today is the day that we remember the sacrifice of the 2,993 casualties in the September 11, 2001, attacks.
I’m remembering…..and I’m sure you are as well.
A worthy website to visit regarding that terrible day is The September 11th Digital Archive.
Also…..this link will take you to my past postings regarding September 11th including my own personal experience that very sad an shocking day… here.
Posted by EHT at Friday, September 11, 2009 1 comments