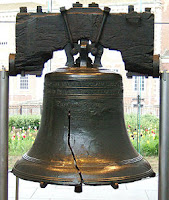 
I really don't dispute the idea that the bell represents freedom, however, I do dispute how it became our symbol of liberty.

I would imagine if I sent out a quick little survey to folks nine out of ten would tell me the bell we refer to as the Liberty Bell became famous and became etched into our collective memory when it was rung to announce the Declaration of Independence on July 4, 1776.

It does evoke certain patriotic stirrings, doesn't it?

The story is false.

While bells were used to mark the reading of the Declaration of Independence in 1776 there is no definitive proof the Liberty Bell rang.  In fact, most historians today refute the claim mainly due to the fact that the Second Continental Congress made no such announcement or conducted a formal reading of the document on July 4th.  They approved the document on July 2nd and sent it out for printing on July 4th.  For more about this see my post from 2006 titled July 4, 1776, An Imagi-Holiday here.

The story that the bell and our independence went hand in hand stems from a fictional story that was published in January, 1847 and was written by George Lippard.

He once described his work as writing "historical fiction and legends."  Lippard didn't deal with the facts.  He wrote what HE thought should have happened.

Basically, he was one of the first American writer's who published his own form of history - a revisionist version.

The fictional story he wrote concerning one of our most precious symbols of freedom was known as The Fourth of July, 1776 or more commonly known as Ring, Grandfather, Ring.  The story tells how once the Second Continental Congress approved the Declaration of Independence our liberty was announced to the people of Philadelphia by ringing the bell in the State House know known as Independence Hall and during the process the bell cracked.

It is a great story.

Bells tolled throughout the city on July 8th in recognition of independence, but historians doubt the bell hanging in the State House steeple was rung because at the time the steeple was in very poor shape.  In fact, the town leaders knew the steeple was in need of repair as early as 1774.

Had you been in Philadelphia during the early days of the American Revolution and had asked about the Liberty Bell the citizens of Philadelphia would have given you a blank stare and a "Huh?".

They didn't refer to the bell as the Liberty Bell at all.  It was just the town bell that hung in the State House steeple, but it WAS important to them.   A town bell in Philadelphia dates back to 1682 with William Penn introducing the first town bell to citizens.   Town bells served as the lifeline of communication back then.  They announced proclamations and announced civic danger.  In fact, during the months leading up to Lexington and Concord the State House bell rang several times.   Some of the events that were announced by the bell were:

*In September, 1764 to announce the repeal of the Sugar Act

*In October, 1765 to announce ships carrying the tax stamps were sailing up the Delaware River.  The bell was actually muffled for this announcement.

*In June, 1774 to announce the Introlerable Acts...again,  the bell was muffled.

On September 11, 1777, Philadelphia was left defenseless after Washington's defeat at the Battle of Brandywine.  It was necessary for the city to prepare for the British since it was inevitable they would take the Continental seat of government and occupy it.

The Patriots knew they must strip the city bare of anything the British could use against them including the bells located throughout the city since they could be melted down and made into ammunition or cannons.   A total of eleven bells including the State House bell, and the bells from Christ Church and St. Peter's Church were removed and prepared for travel.  They were concealed in wagons filled with hay and manure.

Washington appointed Colonel Thomas Polk of North Carolina to move the State House bell and other items needed to be removed to Allentown, Pennsylvania, a 60-mile journey that would take seven days.

Polk commanded 200 North Carolina and Virginia militamen and used a fleet of 700 wagons to protect and move the bell along with the archives of the Continental government, army stores, and the town bell now known as the Liberty Bell.

This website advises on September 18, 1777....the entourage and armed escort arrive in Richland Township (Quakertown).   The Bell is pulled to a small house, owned by Evan Foulke, at the crossroads (the building now known as "Liberty Hall", 1237 West Broad Street). The proprietor of McCoole's Tavern (Abel Robert's Tavern, currently the Red Lion Hotel) extends full support, Polk's horses are cared for and fed as the Cavalry bivouacs for the night, before continuing the journey.   Seven days later, on September 24th, the long and arduous trip from Philadelphia to Allentown ends.  The Bell is safely hidden in the basement of Zion Reformed Church, where it is to stay until the end of the Revolution.

The 84" x 240" acrylic on plaster mural [seen below....painted by James Mann] depicts the Liberty Bell, escorted by Col. Thomas Polk's cavalry of 200 troops, as it arrives from Philadelphia, late in the day, at the intersection of what is now, Broad and Main Streets in the Borough of Quakertown, Pennsylvania.   Liberty Hall is on the right, the Red Lion Hotel, is in the foreground and part of the Thomas residence (demolished 1891), is visible behind it.

The British triumphantly marched into Philadelphia on September 26, 1777.   Except for Tories and peaceful Quakers the town was all but abandoned and her belfries were empty.

Just a side note....Thomas Polk's Grandnephew was our 11th President, James K. Polk.
Posted by EHT at Sunday, November 13, 2011 0 comments

Claudius Smith and His Band of Cowboys

Claudius Smith's exploits are the perfect subject matter for me to share here at History Is Elementary.  He's a true figure in American history yet he is wrapped in many myths.  For every story you find out about him there are naysayers.  What most agree upon is he lived, he died and somewhere in the middle he robbed a few folks.  Another reason why he's a perfect candidate for me to write about is he represents a segment of history that is mentioned but rarely examined closely.

Smith lived in Smith's Clove...an area of New York more than likely named for his family.  The area is known  for its ponds, streams and mountain gorges making up what is also referred to as the Ramapo Valley.  Today the area falls under the jurisdiction of Orange County, New York and the county seat is Monroe - named for President Monroe.  The area also has the distinction of being the birthplace of Velveeta cheese.

During the American Revolution the Smith's Clove area was bisected by important trade routes.  It was the perfect place for Claudius Smith to conduct guerilla warfare, but instead of helping the Patriots, Smith helped the British.

Yes, Claudius Smith was a Tory, and his actions built up quite a reputation stealing livestock and ambushing travelers on the Orange Turnpike between Canada and New York.  His exploits earned him the nickname "Cowboy of the Ramapos" since he stole so many cattle.  His band of men - including three of his four sons - were known as "The Cowboys."

To some, Smith was just a Robin Hood type targeting the wealthy while being generous to the poor, but it is documented he comitted acts of banditry, burglary, horse stealing and the murder of American Army major, Nathaniel Strong.

The governor of New York, George Clinton issued a warrant for his arrest.  The wanted poster stated Claudius Smith was "accused of stealing money, pewter and silver plate, saddles, guns, oxen, cattle and horses."   Often these items and livestock were sold to the British.

The warrant went on to state Smith ambushed John McLean, a messenger being sent to George Washington along the road and stole his dispatch, beat him and tied him to a tree by the side of the road.

The murder charge arose when Major Nathaniel Strong was found lying dead with two projectiles in his neck and head on October 6, 1778.  Witnesses including Strong's wife testified that Claudius Smith and his band of Cowboys broke into Strong's home to burglarize it and ended up killing the major in the process.

Smith was eventually captured on Long Island and hung in 1779 in Goshen, New York.  His last request was to remove his boots because he wanted to prove his mother wrong.  She had always told him his activities would cause him to die with his boots on.

Smith's son, James, was executed at Goshen soon after his father.  It is also reported that a  second son named William was killed prior to his father's hanging and the youngest son was actually able to escape with other members of the band to Nova Scotia after peace was finally declared.

Most of the booty Smith and his Cowboys stole were stored in various caves throughout Smith's Clove.  One cave in particular has been identified as his hide-out and is known as "Claudius Smith's Den".   It's located in Harriman State Park and is pictured with this post.  Legend has it that Smith's spirit guards the cave's entrance.

Claudius Smith was buried in what is now known as Presbyterian Church Park.  Rumor has it that at some point in 1842 the church made some changes to the grade level in the cemetery and some graves were disturbed.   Because of his rumored height (some said he was nearly seven feet tall) Smith's bones were easily identified and certain members of the town took them as their own.  Apparently his skull was treated as a trophy and stored in a meat market until the new courthouse was completed.  The skull was filled with cement and walled up about the main entrance to the courthouse.  The town's leading blacksmith also took Smith's wrist bone as a trophy.   Apparently it was passed down for years to other family members.

I'm thinking that would be an inheritance I would like to avoid.  What about you?