More About the Hunley 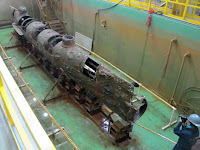 This article begins….”For nearly 150 years, the story of the Hunley’s attack on the USS Housatonic has been Civil War legend. And it has been wrong.”


Well, correcting myths, legends and poor history has been habit around here, so let’s dive in.


In this case it isn’t so much intentionally reporting incorrect history or revising history to make it more interesting –it’s just that we didn’t have all the pieces of the puzzle.  As new pieces are scrutinized from the wreckage we have to adjust the story.... even if it’s been part of the story for over a hundred years.


In this case eyewitness accounts at the time of the attack have been debunked because a piece of the Confederate submarine’s torpedo was found to be attached to its spar. This means the Hunley was much closer to the blast –within 20 feet.


You can read the whole thing here.


So far, the part of the romantic part of the story regarding Queenie’s coin has NOT been debunked, and for that I’m very glad.

Let's Hear It for Local History

Over the last couple of years I’ve immersed myself into a personal local history project involving researching and writing about the history of my home…..Douglas County, Georgia.


What started as a weekly column here at Douglasville Patch morphed into a blog called Every Now and Then located here.
I’ve learned several interesting things along the way, met some great people, and kept myself rather busy meeting a self-imposed Monday deadline each and every week……something I’m trying to get back to doing around here at History Is Elementary as well.


One of the things I’ve tried to do in many of my postings is to connect local history to the larger picture of what was happening in Georgia  and in the United States at the same time.
For example, recently I wrote about a couple who moved to Douglasville, Georgia in 1887.  Now in and of itself that’s NOT so remarkable, but the fact that the couple was from Chicago, Illinois caught my interest. Later as I began to get more involved in the research I saw how far reaching the story of C.C. and Helen Wilmans Post happened to be.


Both were journalists.  He could be termed a muckraker actively writing during the reform movement of the late 1800s. I had mentioned him in a post here at History Is Elementary a few months ago.
His wife, however, got caught up as the self-described founder of “mental science” hawking her “lessons” and books discussing how upon receipt of a fee she could cure patients of various ailments.....a process she described as an "absent cure."


While his wife was busy receiving thousands of dollars a year for her “services”, C.C. Post had become not only heavily involved with local politics in Douglasville, Georgia he also became very involved with third party politics in Georgia via the Farmers Alliance which grew into the Populist Party.  He was known not only on the local stage, but on the state and national stage as well.
The Posts are an interesting study regarding the time period and how folks reacted to them.


You can access  their story at the following links
Part One…..A Little Background on Mr. and Mrs. Post


Part Four….My Final Post Regarding the Posts
My local blog has its very own Facebook page where readers can stay advised regarding updates.  You are more than welcome to “like” the page here.


Yes, all of these are strategies to pursue one’s goals, but all too often we get tired of the time it takes to reach our goals.
That’s when short-cuts come into play.


Take the following words. They represent a short cut……
“The most direct path would be to leave the Oregon route, about two hundred miles east of Fort Hall; thence bearing west south-west, to the Salt Lake; and thence continuing down to the bay of San Francisco.”

It was with those few words the George Donner party made the fateful decision to take a short-cut they found highlighted in the book The Emigrants’ Guide to Oregon and California.
The book was written by Lansford Hastings and even though he never met any member of the Donner party, and even though Hastings didn’t exactly promote the short-cut he is forever linked to the disastrous end the Donner party faced.  Some sources state Hastings who had explored the West extensively had never even traveled on the trail.  Other sources mention he had gone down the trail with no incident a few weeks ahead of the Donner party.


The Republic of California or the Bear Republic did exist for a time in 1846, but just for a few days before U.S. soldiers arrived and the annexation process began.
Yes, that’s why the state flag of California has a bear on it even to this day.


Lansford Hastings still had to meet his goal, however….hence the Hastings Plot.
Ever hear of it?


During the Civil War Lansford Hastings sided with the Confederacy.  Even though he had been living in Arizona for some time he traveled to Richmond late in the war and met with President Jefferson Davis.  He tried to convince President Davis to allow him….on behalf of the Confederate States of America to wrestle California away from the Union and make it part of the Confederacy. The war was over in a year so the plot never amounted to much.
Still……..Lansford Hastings continued to be a man in search of a kingdom…..er…..republic of his own.


It does seem like he had a plan and just kept working those same steps over and over. Doesn’t it?
In the years following the war Hastings became involved with a group of ex-Confederates who wanted to move to Brazil.  Lansford Hastings traveled to South America, and met with the government there to set up arrangements for the Americans to settle.  He also wrote a guide for those wishing to move there.


Lansford Hastings died while traveling to Brazil accompanying a group of settlers in 1870, and while he never did achieve his goal of a high governmental office Hastings did achieve one thing…. 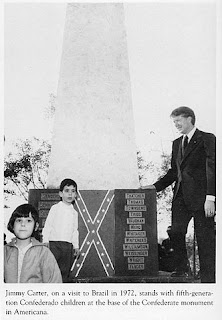 Over 10,000 Confederados. as they are known in Brazil remain there and are descended from the ex-Confederates. Every year they have festivals complete with Confederate flags, Confederate uniforms, hoop skirts, food of the American South infused with that of Brazil.  They also have dances and music their ancestors brought with them….styles from the antebellum period.


Former First Lady Rosalyn Carter’s great uncle was one of the first Confederados in Brazil.  The Carters traveled to Brazil in 1972.

Getting back to Lansford Hastings...He finally got that kingdom, of sorts. He just didn't get to govern over it.
Posted by EHT at Monday, January 14, 2013 2 comments