In my opinion the least taught war in United States classrooms has to be the Korean War.

The U.S never declared war on North Korea because we weren’t there on our own. Our involvement was a result of the United Nations aiding South Korea with the United States supplying 88% of the forces. The People’s Republic of China entered the war helping North Korea. Officially the Soviet Union provided material aid as well for the North Koreans, but talk to anyone involved, and they firmly believe the Soviet involvement included men on the ground and in the air.


I feel that events in Korea during the 1950s have a real place in the classroom, but ignorance keeps it from being fully explored in the curriculum.
We don’t take the time to fully explore all the possibilities the content of the Korean War could have in our classrooms. Take any history textbook and thumb through pages and you see that very little is given about the Korean War. Most of the time it’s treated as a “breather” of sorts between the end of World War II and the startup of the Vietnam War. It was done that way when I was in school, and in most classrooms it’s still treated that way.


I don’t blame teachers for not diving deep into the war. Our teaching standards barely touch on it, but aren’t we cheating students regarding an important chunk of American History?
Aren’t we throwing the service of the men who served during the Korean War away by not covering the war as best we can?


The Korean War is just another example why teachers cannot rely on the textbook as a complete tool to help them frame standards into a viable curriculum. You have to go outside of the textbook for content and a complete picture of the events in Korea.
My favorite source happens to be memoirs – first-hand accounts of the events from those who were there. In the case of Korea I had a memoir fall into my lap through my local history project regarding Douglas County and Douglasville, Georgia where I live.

One of our former editors for our local paper has written a memoir which covers many of his life experiences, but mainly his exploits in the U.S. Navy aboard the USS Sicily during the Korean Conflict. The book is called Excitement!! In War and Peace

by W. Harris Dalton. It can be purchased on Amazon by clicking on the title or through Yawn’s Books in Canton, Georgia. The cover of the book features a picture of the author (extreme left standing) with some of his buddies. 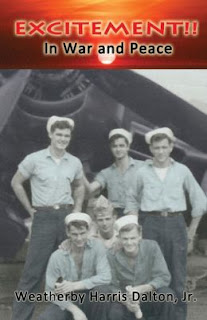 While there are numerous snippets of information in Mr. Dalton’s book that could be extracted and infused into a teacher’s Korean War curriculum here are five things I found extremely interesting:


1. Mr. Dalton spent three years aboard the USS Sicily described in Collier’s magazine as “the phantom ship” due to the fact it was always on the move and the enemy didn’t know where they would be next.  Mr. Dalton states, “To her credit ‘the Queen’ was victorious in two of the bloodiest battles – Pusan and Hungnam – in American history. She was also there providing close air support for the marine’s historic landing on Inchon that turned the tide of the battle on the peninsula and forced the fight for the Yalu River." 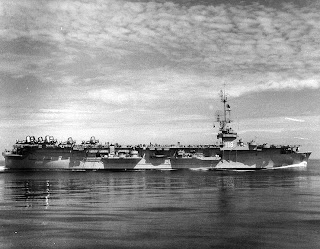 I don’t know about you, but just from that snippet from Mr. Dalton’s book I want to Google a few key words for more information.

2. The Black Sheep Squadron was re-commissioned during the Korean War and flew Corsairs off the Sicily.  As Dalton states, “Navy and Marine Corsair pilots were available and they made perfect sense for the Korean conflict against North Korea which had no air force and navy.”

I know what you are thinking, and yes....it's the same Black Sheep Squadron that gained a reputation during World War II. The picture below shows some of their planes on the deck of the Sicily. 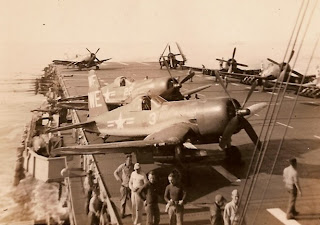 3. Mr. Dalton gives great insight to a Black Sheep Squadron mission on Christmas Eve, 1950 where they had been sent out to check on what was reported to be a group of guerillas heading towards American troops.  The Black Sheep Squadron planes found the suspected guerillas and completed a fly-over. They found the group contained a large concentration of women and children. As they flew over the women held their babies up in what was interpreted as a friendly gesture. The group seemed like friendly refugees.

There was no danger, right?

Later these same friendly refugees wiped out a whole Marine group. Members of the squadron were sent out immediately on a search and destroy mission.

One of the squadron members told to Mr. Dalton, “I circled around, and when I was directly over them, I dropped a napalm bomb right in the center of the marauders. We then circled the scene until we had established there were no survivors. I knew they had killed my fellow marines, and it wouldn’t have been so bad if it hadn’t been Christmas Eve.”
4. The book discusses operations involving Chinese and Russian forces stating, “What had begun as a mission to drive North Korea out of South Korea escalated into an overt fight against North Korean and Chinese forces when we moved up the Yalu River and the surreptitious aggression by the Soviet Union, the bully in the neighborhood.”

Mr. Dalton tells of an incident that was wiped from the books regarding a supposed Russian submarine that was headed towards U.S. forces and wouldn’t identify itself. For two hours Mr. Dalton, as radar man, personally filled three pages of his log book regarding messages concerning the location and actions of the sub which culminated in sightings of an oil slick.

Later when he checked the pages of the logbook, they had been removed with the explanation that the action HAD NEVER TAKEN PLACE. The event never made the news, of course. 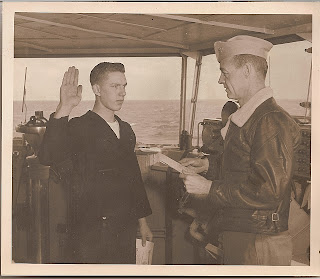 5. During a portion of the time Mr. Dalton was assigned to the Sicily his captain was John S. “Jimmy” Thach, made famous for his World War II flying exploits, and for his invention of the "Thach Weave", a tactic that enabled U.S. fliers to hold their own against the Japanese Zeroes. He is also given credit regarding another tactic referred to as the "big blue blanket".


In the picture above Thach is on the right.
So, before you head off to Google all the key words I’ve thrown at you regarding the Korean War, check out Mr. Dalton’s book for even more first-hand war experiences aboard the USS Sicily.
Posted by EHT at Friday, August 23, 2013 1 comments