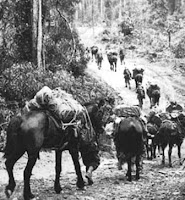 My niece and sister sent this link to me the other day. It is an obituary for the grandparent of one of my niece’s friends. This line caught my eye:

[Mr.] Max [Howard Medert] was a WWII Army veteran who proudly served as one of “Merrill’s Marauders” in China, Burma and India. Following his military career, he served on the city of Atlanta Police Force , retiring after 25 years of service.

Now, just the fact that Mr. Medert had 25 years of service with the Atlanta Police Force is commendable, but he also was a member of Merrill’s Marauders in China, Burma and India.

What? You don’t know about Merrill’s Marauders?

I’m not surprised. You see, the China-India-Burma theater of war during World War II is basically forgotten by the history books mainly because it did not follow the standard American command structure, but it is key in studying the push toward VJ Day and in realizing some of the roots of today’s modern army.

It was during their Quebec meeting in August, 1943 when President Roosevelt and Prime Minister Churchill decided there needed to be long range penetration groups that could infiltrate Japanese held territory.

President Roosevelt called for volunteers who were willing to take part in “dangerous and hazardous“ duty. The result was over 3,000 volunteers from across the military population…..some already battle hardened, some with no battle experience whatsoever, and even soldiers from the stockades turned in their “get out of jail” free card to become a member of the 5307th Composite Unit (Provisional), code name Galahad aka Merrill’s Marauder’s after their leader Brigadier General Frank Merrill.

The Marauders trained in India before beginning a 750 mile march through the harsh jungles of Burma. The soldiers formed three battalions in six combat teams known by their colors – red, white blue, khaki, green, and orange. Their mission was to destroy Japanese supply lines and communication and to re-open the Burma Road. They engaged the Japanese at least thirty-two times and covered more jungle terrain than any other U.S. Army formation. They did this with no tank and no artillery support. All other supplies were carried by the men themselves or they received along the trail in air drops.

During the march the Marauders endured forced marches through monsoon season, hunger, malnutrition, amoebic dysentery, malaria, fever, snake bites, scrub typhus, and fungal skin disease. According to Colonel Charles N. Hunter in his book Galahad, of the 2,750 men who entered Burma only two were left alive who had NEVER been hospitalized with wounds or major illnesses.

Since the soldiers would be traversing heavy terrain they were not able to utilize mechanized vehicles so pack mules were employed to carry the heavy loads of radios, ammunition, and heavier support weapons. Over 360 pack mules were used and training commenced in India before the men began their arduous journey. Usually the pack mules would be “debrayed” for service so as not to alert the enemy of their presence, but Charles N. Hunter elected NOT to “debray” the Marauder mules stating it was one of the few pleasures a mule had……in making their distinctive noise and later advised there was never really an issue of the mules giving away their location in the jungle.

Mules weren’t the only animals used for transport. When a ship carrying some of the mules was lost in the Arabian Sea over 300 Waler Horses were brought in as well.

Once, at Walawbum, when a Marauder unit was confronted by an overwhelming enemy force, the mules set up such a clamor that the Japs thought they must be outnumbered and withdrew……

The one fright the mules never got used to was the sight of an elephant. The fright was mutual. When elephant met mule there was pandemonium—trumpeting and braying, sometimes a hysterical stampede….


It took them four months to cover the 700 miles of pestilential jungle, but they made it. Last week many of the mules were still there in the interior of Burma, shuttling supplies around in the battle for Myitkyina. They will probably never bray in Missouri again. When the northern Burma campaign is finished, they will be turned over to the Chinese. Some day they may plod on east over the Burma Road into China.

I think a mention of the Marauders is necessary with any decent coverage of World War II in the classroom, and I would devote at least one entire lesson to the topic. The movie I’ve published below is an excellent classroom resource, however, at 25 minutes I would show the clip whole group, and stop the video after each segment to discuss and make points of emphasis for students. The video is actual footage and is from the National Archives and Records Administration. The first few moments just show a camera image….keep it rolling.

Today’s modern 75th Ranger Regiment can trace its very beginnings to Merrill’s Marauders. In fact, the patch worn proudly by U.S. Rangers today incorporated the colors of the six fighting groups of the Marauders.

Thank you to Mr. Medert and to all of the other Marauders for their proud and valiant service.

Here are some other links for more information regarding Merrill’s Mauraders:

Stories from the Veteran’s History Project 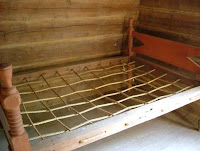 When I was growing up the words said at bed time included ‘good night’ and ‘I love you’ along with the phrase ‘Tie-Tie’ and ‘Sleep tight, don’t let the bed bugs bite”
‘Tie-Tie’ came from me because as a little girl I couldn’t pronounce the words ‘night-night’…..all that came out was ‘Tie-Tie ‘and the phrase entered our family lexicon. If I said ‘Tie-Tie’ to my father or my sister they would know exactly what I meant.

But what about that “sleep tight” thing? Where does that come from?

Recently I posted a picture of a rope tightening key for Wordless Wednesday. The key was used to tighten rope mattresses common in colonial and post-colonial America.

Here’s a video showing how the key was used to tighten the bed ropes.

When you tour old colonial locations docents love to share with you the phrase “Sleep tight” came from the fact that you would want the ropes tight in order to get a good night’s sleep.

It does make sense, doesn’t it?

But upon closer study there is no definitive proof the saying originated from tightening the ropes.

The Oxford English Dictionary states the phrase is fairly new and Michael Quinon at World Wide Words  advises the phrase was used as late as 1916 in L Frank Baum’s Rinkitink In Oz, and Susan Eppes uses the phrase in Through Some Eventful Years dated 1866.

Most sources state ‘sleep tight’ refers to sleeping soundly or properly which dates back to Shakespeare.

The only thing we can be sure of is the tool I pictured here the other day is a device to tightening the ropes on a bed, and…….that’s about it.
Posted by EHT at Saturday, October 09, 2010 1 comments

Yes, I know this is a piano, but look at the two china looking objects on top of the piano...... 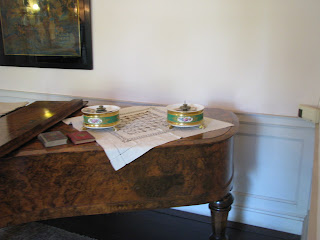 
Here’s a hint….Something was placed in them as people walked by.

Other bloggers post wordless images on Wednesday , too. Visit the main page HERE to find them.
Posted by EHT at Wednesday, October 06, 2010 2 comments