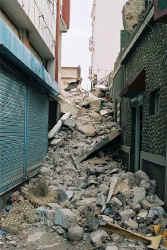 Last week I related the wall to the cynicism that educators can develop around themselves. This week I use my pastor’s sermon regarding rebuilding the wall in Jerusalem to symbolize the quality product educators are striving to produce.

Nehemiah did not give up. He was one man resisting a contagion of fear. He could have given up and retreated to his former position in Persia. He didn’t. His tenacity challenges me to remain steadfast as well in my educational endeavors even though the educational rubble is getting deep.

Teachers, the educators on the front line, are worn out. We’re told every child will succeed…NOW. We’re told every third grader will read on a third grade reading level by the end of third grade…NOW. The world isn’t too friendly. They want school improvement and oh by the way it’s our fault that things are the way they are and we better fix it…NOW.

It doesn’t matter that you spent last summer rewriting lesson plans formatted to the “guru of the moment” and what he thinks a good lesson plan should be since you will spend this summer adding additional bells and whistles to your plans because somebody somewhere says we must have them.

Now before I go too far off the venting deep-end let me advise that I see many good things that have come along since the passage of NCLB. Curriculum needed adjusting and procedures needed to be put in place to make sure teachers were sticking to what should be taught and at what level. I even agree with benchmark testing but it shouldn’t be the ‘be all, end all’ to determining educational growth. I do disagree with the frantic to and fro that state board and county board officials seem to be doing. Let’s try this. No, that doesn’t work. Let’s go back to that. This looks good. Ok, everybody do this…NOW.
Here we are in the thickness of battle and the very ones who should support us don’t always do a good job of it. Why doesn’t somebody somewhere stand up and scream, “Ok, we get it. We know what we need to do. We understand the law, and we will do everything in our power to comply. Let us do it already.”

Nehemiah teaches us that there is no instant fix to what ails us. It’s a process that must be endured. The rubble must be removed. You can’t build anything worthwhile on a pile of rubble. A firm foundation must be established.

One thing encouraged Nehemiah, and it was faith. It was the root of his encouragement. As a Bible believer I know that there is not a lot I can do to improve the status of society today. I know things are going to get worse. However, I can work to make sure my classroom is a place that provides strict discipline, limits, and security while we work on the bricks in our educational wall. I can be willing to eliminate traditions and practices that no longer work or aren’t feasible. We don’t get a roomful of traditional students anymore. Traditional methods don’t work. I must be also willing to eliminate beliefs that have never worked and some new beliefs that won’t work either.

We must also be willing to admit we will never get rid of all the rubble.

My basement floor is the foundation of the home my husband and I have created. The rubble has been removed but every so often the dust and assorted crud builds up and we have to sweep it out.

You have an informative and educational blog. I enjoyed my visit.

All of the tools at educators disposals should be used as just that, tools. No one can build a house with a hammer alone.

You make a very good point, "we don't get a roomful of traditional students anymore. Traditional methods don't work." Observing and being objective enough to eliminate what doesn't work is hard for some but a must.

Also, accepting there will always be rubble we just have to make the best of what we have and go forth.