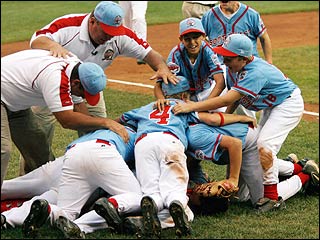 I also remember the momentum building up to the first real winning season and all of the subsequent seasons thereafter. I will never forget that one winning game when Braves announcer, Skip Carey, was so overcome with a victory that he simply screamed into the mike, “Braves win, Braves win!” over and over and over.

However, nothing….absolutely nothing can compare with Georgia’s Little League team from Columbus and their ultimate victory over Japan a few minutes ago.

Yes, I know….the tournament started out with a player, a mere child, spouting the f-word which led to a 5 second tape delay from that point on. We also got to witness a player being hit by a coach. It would appear that today’s moral malaise has infiltrated Little League too.

However, the ending of the tournaments was simply priceless and was a lesson for us all. Mere children placed in the position of professionals under pressure to win, win, win and the ultimate outcome that led to two sets of tears. Tears for joy and tears for what might have been.

Team Columbus. you did your state proud. Not just for the way you played through the tournament, but also because of the way to acted in your victory. Pitcher Kyle Carter reminded coaches that the team needed to get on over to shake the hands of their Japanese opponents. The boys traded handshakes and nodded heads at each other and as the winning team jogged off for a lap around the field they turned and made sure their opponents knew they were to come along too!