A Painter for Several Units 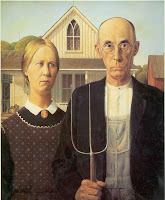 This is American Gothic, one of the most recognizable and parodied images in American culture. It was painted in 1930 by Grant Wood. Even though my young students know nothing about Mr. Wood or the artistic style of Regionalism they immediately tell me they’ve seen the painting before when I flash it up on my television monitor. It’s not surprising because it seems everyone has done their own portrayal of the painting in some way or another…just do a Google search using the key words "American Gothic". In fact, I posted Georgia’s version of the painting this very week.

My wordless image for this week is called Calendulas. Wood painted it in 1929, and it is very different from his other works. Many of the readers who visited my Wordless puzzle brought up Van Gogh. They did this for good reason. The style of Calendulas is reminiscent of Van Gogh’s Sunflowers. Click over to Sunflowers and then back to Calendulas (the first link in this paragraph). Notice how similar the two works are. There is a thick application of paint on the flowers themselves. Notice how the vase in Calendulas seems to tilt forward---this is due to the horizontal stripes. The illusion of a round vase is achieved through the curved blue stripes on the vase, and the horizontal table edge provides depth to the painting. When I’m pretending to be a Language Arts teacher I like to show students Calendulas and Sunflowers together. Then I ask students to make a two-column chart to compare and contrast the two paintings. We spend some time working on the charts to word and reword ideas that eventually wind up in a written essay. 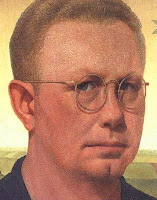 orn in Amamosa, Iowa. His first forays into art include creating scenery for his for his high school plays and drawings for the year book. Later he studied at an art institute and visited Europe several times. He even organized his own Paris artshow. He was a well travelled person and very cosmopolitan, however, once he finally settled back in Iowa for good he was often seen in overalls. He was a member of a group of artist referred to as Regionalist and was part of the American Scene Movement in the 1930s. During a time of great nationalism in the United States he looked to America’s past and supported rural life. His paintings that were completed during the Depression seem vastly different to the start realities of the time----they were filled with cultivated fields while top soil was blowing away in the Dust Bowl.

Once the United States entered World War I, Wood joined the Army and travelled to Washington D.C. where he designed camouflage for U.S. artillery. I previously wrote about the use of camouflage in World War I here. Later, after the war, Wood returned to his Iowa roots and took up residence in a carriage house with no address. He promptly made one up. His reason for returning home was simple. He said, “I realized that all the really good ideas I’d ever had come to me while milking a cow, so I went back to Iowa.” His body of work is great and doesn’t always include paintings. He has worked in many mediums including stained glass. A corn-themed chandelier Wood designed hangs in an Iowa hotel and the image on the Iowa state quarter is a Wood creation. 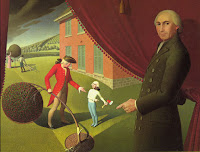 can be used all year long at various points of an American History class. George Washington and the various myths that surround him can be a great time to show students Wood’s Parson Weem’s Fable. When students are introduced to Henry Wadsworth Longfellow’s The Midnight Ride of Paul Revere Wood's painting of the same name helps to draw students into the event. Finally, the Birthplace of Herbert Hoover (my favorite Wood painting) is a very interesting view of a presidential birthplace.

In a statement that accompanied his final painting Wood remarked, “In making these paintings as you may have guessed I had in mind something I hoped to convey to a fairly wide audience in America---the picture of a country rich in the arts of peace; a homey lovable nation worth any sacrifice necessary to its preservation.”

What do you think of this statement?

Does this America still exist?
Posted by EHT at Thursday, July 26, 2007

Oh EHT, absolutely I agree. It may not be perfect, but it's still a great country.

I have had the privilege of traveling to many countries where freedom is something spoken of but not practiced, where civil rights are promised but not protected. I have seen and spoken with people in these same nations who wish they could live in the U.S. for its freedoms and economic opportunities.

I remember back in the late 1980s when I was stationed in Germany, part of my job was to assist eastern European refugees obtain asylum in Germany or immigration to the U.S.

I can not tell you the emotions that would course through these people when they were informed they would be able to go to the U.S. and live there. I saw people and families who would burn everything - IDs, college degrees, birth certificates, clothing - all in an attempt to be rid of their old lives in dictatorial countries in an effort to gain entry into the U.S.

I also remember those we couldn't help and the tears they would shed knowing what that would probably mean - going back to the country they came from. I remember one lady who came to our offices three different times begging us to help her.

Yes, I believe America is a lovable nation worth any sacrifice.

Americans are the friendliest people in the world. More often than not, they will go out of their way to help you out and assist you. They smile, they greet you, they are friendly.

Americans help anyone who needs it. I know everyone hears about the violence in Iraq or Afghanistan.

But I remember when I was stationed in Miami and my focus was on South America in the early part of this decade. I remember the number of humanitarian missions we sent to Central and South America after hurricanes and floods and such. Americans help with food, clothing, money. We hate to see people suffering. How can we forget the outpouring of help to those who suffered from Andrew or Katrina or the multitude of other natural disasters over the years?

Over time, the concept of the United States has turned into an idea. It is the idea of freedom and liberty. This liberty and this freedom is found in constitutions throughout the world. It is used as an example for others.

Finally, How can we so easily forget JFK's admonition to ask what we can do for our country, not what it can do for us?

So yes EHT, It is a country rich in the arts of peace. It is a lovable nation. It is worthy of sacrifice for its preservation. For we are not preserving just a nation, but an idea.

After having spent over twenty-five years criss-crossing this country and meeting Americans from all walks of life, I can safely say that we are a nation dedicated to the ideals of our Founding Fathers and decent family values.

I've had the opportunity to look at my country through the eyes of my international clients and have been pleased that they were 'astounded' at how pleasant and friendly Americans were. This was as true in New York City as it was in Iowa or Washington State.

I feel blessed to have been born here.

The 'Midnight Ride of Paul Revere' was on the cover of my eighth grade American History textbook. I had also listed it on my Thursday XIII for March 7th along with twelve other paintings that I loved.

BTW My posting has been blocked by blogspot because they had detected it as a 'spam blog'!

I have a good friend, Marina, who is from Russia. She grew up during the era of the USSR (I still say Soviet Union and my students look at me with a "what?" look.) In any case, she's a newly minted American citizen and I remember asking her what is one thing that she appreciates the most about living here. Her answer, "the ability to sit in a cafe, and meet with my friends, and talk about anything we want."

We have no idea how precious that is because we've never known it any other way.

Hey, if you're in Chicago, drop by the Art Institute and visit the paintings -- that's where "American Gothic" usually hangs (it went on tour to Cedar Rapids last year, as I recall, but I think it's back in Chicago). It's really cool seeing them.

Except, the painting of Parson Weems is in Fort Worth, at the Amon Carter Museum, which would be worth the trip alone for the Frederic Remingtons -- but it's closed for the summer for repairs to the fire suppression system.

(If you're in Fort Worth anyway, go to the Amon Carter, cross the street and go to the Kimbell Art Center instead, or go around the corner to the Fort Worth Museum of Modern Art.)