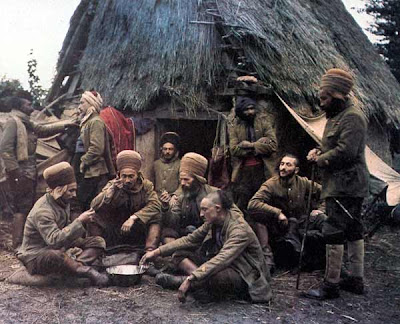 What Great series of events was this color picture taken from? What are these men doing? What is their mission? Where are these men from? When do you think this picture was taken?

Still wondering about that blue painting last week with the flowers? My explanation can be found HERE.

The explanation for this Wordless image can be found here.
Posted by EHT at Tuesday, July 31, 2007

This is a wonderful teaching strategy! Use images to set up the lesson...Now I need to read your explanation. Too curious.

Love your pictures, have no clue, but I love it.

OMG, I have no idea so I'll just take a wild (wrong) guess: They're taking a break from building the railroad over the Sierras.

When you get done laughing, let us know, ok?

I would say they were Muslim, almost a Dervash head covering. Are they Turks?

I got an Atilla Vibe. Huns?

No Turks, No buiding a railroad, No Everest, No Huns....

Here's a hint....this picture was not made in America.

It's probably more current than anyone thinks. Some countried are still living in such depravity which saddens me.

But are they Muslim?

i dunno. ill go and find it out.

As you know, I like working on these, but this one needs some more clues. I'm looking at Iraqi independence and other events in the area. I was thinking that this photo was from the 1930's.

I think Eric will know!

Doing back to school shopping is exhausting....didn't get back until late afternoon.

Ok, these folks very well could be Muslims, but are not from the Middle East.

The picture was taken prior to the 1930s, but during the 20th century.

The men in the picture were very involved in something that the U.S. was involved in as well.

They and many others are the forgotten footnotes of the events they were involved in.

Finally, don't let the fact that the picture is colored color your prospective of the picture.

I had been toying with Africa, WWI, prisoners of war or slave traders. I was concentrating on the headgear, the military coats, and the facial structure. There's a poorly thatched mud home in the background.

I thought it was too late for Henry Stanley! I also think the photo is hand-colored.

Honestly, I need to give up!

MY WW and Figure it Out Friday is so much easier this week!

Believe it or not my source says this picture is not hand-colored.

Question to ponder: Did Africans serve as soldiers in WWI? Who did they fight for? Did they actually fight?

BTW The structure in the background is called a tukul.

FYI During my research I did find out about the arrival of the first Ethiopian diplomatic delegation to the United States on July 11, 1919, The four envoys were sent to the U.S. by Empress Zawditu.
Upon arriving in Washington D.C. they took up residence at Hotel Lafayette and awaited their formal presentation at the White House.

“It perhaps is of much interest to know that the Abyssinian religion is the oldest Christian religion in the world”, Captain Morris, the delegation’s chaperon, told reporters. “The queen of Sheba, who visited Solomon was once their queen, and the present ruler is descended from the queen of Sheba.”

The Abyssinian Mission enjoyed an overall warm welcome and before returning to Ethiopia, they toured the cities of Chicago, New York and San Francisco. They also visited an Irish Catholic cathedral, a Jewish synagogue, the Metropolitan Baptist Church in Harlem, and Yellowstone National Park

At the time Woodrow Wilson was serving as the 28th President of the United States.

I guess I'll keep plugging away. But even if I don't get it right, I found out some interesting tidbits!

I've spent the past hour looking at Libya (Turkish and Italian problems) and Morocco.

Go back to my questions to ponder...the explanation post will be up later today.

World War I is not my forte. I understand WWII far better.

There were occupations of Ethiopia, Libya, and Egypt. It was the end of the Ottoman Empire (Turks)and the beginning of the occupation of African and Middle Eastern countries by Britain, Italy, Germany, and France. There was fighting in East Africa, especially in the Belgian Congo between the British and Germans.

There were no African troops in Europe.

I can't wait to find out!