Forgotten Soldiers of the Great War 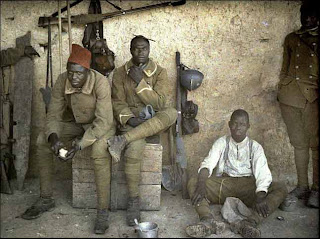 The Heritage of the Great War has a section which is dedicated to color images taken during World War I. The picture I posted this week for my Wordless image (click over and look at it) is of North African soldiers, mainly Algerians, cooking their meal during the Great War. The location is Oise, France in 1917.

I like to show this image to students because it teachers them images can be deceiving sometimes. What we think we know may not always be relevant, and we must always be willing to accept alternatives to our way of thinking. For example, most of us would not have dated the picture during the Great War (1914-1918) because we assume that the time period is too early for color photography. Most of us assume this because the images we have seen during this time period are black and white. The webpage I’ve linked to goes into an explanation regarding the color images. Here’s a sample:

The first experiments with color photography were carried out in 1904 near Lyon in France, where father Lumière owned a photographic factory. In 1907 the Lumière brothers patented the autochrome process they had invented.

The picture of the Algerians [in my Wordless image] was made with such an autochrome plate. Microscopic grains of potato starch were dyed red, green, and blue-violet, then mixed evenly and coated onto a sheet of glass. A black-and-white emulsion was then flowed over this layer.

During exposure, the grains of potato starch on each plate acted as millions of tiny filters. The light-sensitive emulsion was then reversal processed into a positive transparency.

When viewed, light passes through the emulsion and is filtered to the proper color by the starch grains. The resulting mosaic of glowing dots on glass gives autochromes the look of pointillist paintings.Autochromes were the first true color pictures, and the only industrial color photography process until 1935.

The web page points you to some specific pages where other autochrome images can be found. If you visit make sure you have some time to look around. This site is rather large. It contains many images and great articles. If you plan to use it with students I suggest you consider their age and maturity. Many images are rather graphic. I have used images from this site for my fourth and fifth grade studnets, however, they don’t have free access to it. I generally bookmark what I want them to see or present it in another format.

Now I’d like to turn away from the aspect of the early uses of color photography to examine the use of African troops during World War I. Many of the Algerian solders were known as the Terrible Turcos. It is said they fought so fiercely their French General had a difficult time holding them back when facing a larger enemy force. Many of the Germans were afraid of them. Algerians weren’t the only Africans involved in World War I. Troops from Senegal (seen in the image above) were also used by the French, and the British utilized South Africans. Over 500,000 African troops were used mainly by the French and British to bolster their armies. China, Japan, India, Egypt, and Canada also participated in providing laborers. Very few saw actual combat. Their strength was used mainly for manual labor such as building bridges and unloading ships.

So why would Africans be so willing to help France and Britain during the war? Usually nations assist nations because of ongoing treaties and alliances. In fact, a web of alliances is the main reason we refer to the Great War as a “world” war. However, France and Britain received assistance from some of the nations of Africa not because of desired alliances but because of imperialism which many of the world’s superpowers had been engaging in for quite sometime. France held Algeria and Senegal as colonies and Britain was involved with South Africa. It was only natural to the mother countries to utilize the full resources their colonies afforded them.
One of the saddest and mostly forgotten stories regarding the assistance of African soldiers has to do with a troop ship known as the SS Mendi.

21, 1917 the steamship Mendi was carrying over 600 South Africans who were crossing the English Channel on their way to France through heavy fog. These particular men would not be bearing arms, but would be working as laborers. The SS Darro, a heavily loaded mailship broadsided the Mendi causing it to list sharply to starboard. Lifeboats could not be lowered from that side of the ship and the portside lifeboats were not sufficient to carry all of the men….many of the troops had never seen an ocean and many did not know how to swim. Some jumped from the deck sliding into extremely cold water. The fog made it difficult to see everyone. Many succumbed to the cold.

Another large number simply went down with the ship. Rev. Isaac Dyobha, a chaplain, attempted to calm and rally the men left on the deck. At Dyobha’s urging the men removed their boots and began dancing a death dance. Dyobha encouraged the men by saying:

Twenty-five minutes after the Darro had nearly cut the Mendi in two the sinking ship could no longer be seen. The death dancers were gone. The Darro offered no assistance to help with recovery; however another ship, the HMS Brisk, picked up scattered survivors. There was no official recognition from the British government to the families of the dead and missing. No member of the troops who were on the ship received a medal or ribbon. Based on a decision by the South African government only the white officers on board with the troops received any recognition.

An inquiry was held regarding the actions of the Darro and the captain of the ship was blamed for the accident. The ship was suspended for one year from use. Since that fateful day when so many men lost their lives divers hunted for the wreckage. It was finally located in very deep waters in 1945; however it was not officially identified as the Mendi until 1974. Once Apartheid ended in South Africa the history of the Mendi finally entered collective thought. Since then there have been many attempts to honor the dead and to place their memory into the history of World War I.

I like to teach this little known aspect of World War I because it gives a great global aspect to the problem of race relations far removed from the events of the American Civil War.
Those who want to learn more might want to see Let Us Die Like Brothers, a documentary produced by the History Channel and the Commonweath War Graves Commission.

That was absolutely fascinating! I love your use of the images to stimulate discussion (and of course learning). I have used images or picture books for creative writing and specific types of writing, but I really like how you use these pictures. I look forward to reading more.

drpezz took the words right out of my mouth! My jaw dropped!

Well, more study for me!

It's little known things like this that make your blog one of the best educational blogs on the Intertubes.

That is a cool website. There were many French "Colonial" soldiers fighting for France in 1940 also. I find it interesting that ( I wish I could recall where I heard this; probably a "Diplomatic History of Modern Europe" class back in college....anyhow.....), that many French blamed their colonial soldiers for France's fall to German Military forces. This led to further discrimination against "colonials" and after the war, France and her colonies soon parted ways, often after much blood shed. However, historically, IIRC, France's Colonial soldiers surprised their German opponents with their fighting skill and tenacity, usually surrendering to the Germans only upon orders from their white French officers.

Based on von Lettow's experiences in East Afric in WWI, the German military knew "African" soldiers, if properly trained and led, could and would fight as well as any other soldier.

Thanks for visiting everyone.

Polski, thanks for the extra details. I need to do more research about WWII myself regarding this aspect. I find it very interesting.