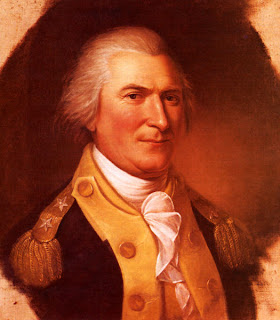 Ok, who might this man be? Can you name all of the different ways he served his country?

Last week's WW was identified at the end of the comments, and the week before was an image of the Illinois Monument at the Vicksburg battlefield.
Eric, The Tour Marm, and GriftDrift were the closest in analyzing last week’s image.

Learn how to join Wordless Wednesday or look at the pictures of others here.
Posted by EHT at Wednesday, July 18, 2007

Oh my goodness, a thinking WW! I thought school was out for the summer :)

I am HORRIBLE at recognizing people, but my first thought was Alexander Hamilton. He served our country by posing for a portrait for the front of our ten dollar bill. (I'm kidding of course).

How can one name ALL the different ways he served our country? Founding father, officer in General Washington's army, leader in the Constitutional Convention, treasurer political party leader, president...whew, the list goes on.

If it's not Hamilton, then I'm terribly embarrassed and haven't got a clue :)

Joined the Revolution right when it began.

1776 - Send to Ft. Ticonderoga and court-martialed due to its loss. Later reinstated

1787 - appointed governor of what is now Ohio, Indiana, Illinois, Michigan and parts of Wisconsin, and Minnesota. Named Cincinnati, Ohio after the Society of the Cincinnati (which Gen/Pres Washington created as a society for former officers during the Revolution - still in existence today).

1800 - Served as governor of Ohio Territory

Was a fervent Federalist and was removed from governorship by Jefferson in 1802.

Any other questions EHT? Geez-louise, make 'em harder. Bring it on lady! ;)

Oh, and this is where I got my information from:

EHT, I LOVE it when you post stuff about the revolution. I could just eat that up all day long.

Oh, and regarding the last sentence of my previous post? Don't make 'em too hard, then I feel really really dumb and I don't like that feeling! Makes me work hard.

I don't know who it is, but I love to read your posts because I love history and I love learning. Keep it up it is great.

I am finally going to blogroll you.

Eric has pointed out someone I didn't even know!

Well, thanks everyone. I needed a few compliments today, even if I planned poorly and Eric was able to identify my image right way. Durn, but that's they way it goes somestimes when you plann a lesson. You discover your kids already know the material....then you have to take a deep breath and back up and take a different course. I'll do better next week.

Actually, some family business has taken my time this week and I haven't gotten to plan like I normally do...and I knew I was in trouble when I posted over at the WW site and saw I was number 300 plus. I guess 12 noon is kind of late to post a WW.

I will tell you the truth. I had no idea who this guy was. BUT! I did recognize the rank as a 2-star general (AKA: Major General). Once that was determined, I knew the Continental Congress had only authorized a handful of Maj Generals; about 13 or of them. With so few, I knew finding their portraits would be a cake walk and so proceeded to google "major general" and "revolution" and other similar keywords. and viola! There it was as plain as the nose on his face!

But seriously EHT, thanks for the WW on the Am. Rev. I loved it. It was fun finding it and learning more about him.

Congrats Eric! (and yes, I'm blushing with embarrassment). I did notice the military uniform and knew Hamilton was an high-ranking officer under General Washington but had no clue on the ranking system. That's what happens when I don't do my homework! :) Great job on this!

This is one WW site that I'll be sure to visit again. Thanks EHT!

Eric, you and Lynanne have shown the exact way I want students to react to images I might place in front of them in the classroom. Take risks and guess based on your prior knowledge....wrong answers in an exercise like this does not mean failure. It means minds are working, minds are connected, and minds are engaged.

Analyze the image for clues...use your prior knowledge, and sometimes did a little deeper.

I think this would be a great example to use with students to show them the different way you both came to a conclusion.

If we want students, especially my young ones, to think critically we have to actually show them the thought processes that are involved.

Eric was too fast for me!

I wonder if you can figure out my WW? (It should be easy.)