1. While I was roaming around Biltmore over New Years I became enthralled with the ornamentation found everywhere along the 780-foot façade. I love to take close-up pictures of architectural details, and Biltmore provides me with all sorts of delights. 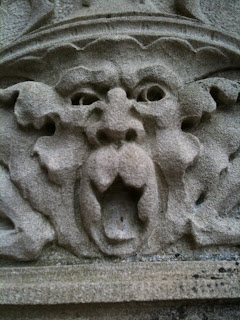 2. One of the things that Mr. Elementaryhistoryteacher and I focused on were the many gargoyles on the house. The word ‘gargoyles’ is derived from an old French word gargouille, meaning throat. The English words gargle, gurgle, and gargoyle are derived from gargouille. 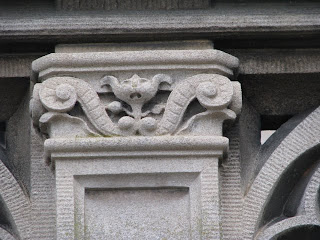 3. Some believe that gargoyles – sometimes called grotesques – are inspired by the skeletal remains of prehistoric dinosaurs and other fossils. Originally a gargoyle was considered a waterspout, directing water away from a building.
Yes, I agree.....the figure below seems rather proud of his ummmm.....attributes. 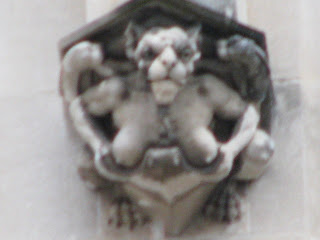 4. Technically an architect calls a waterspout on a building a gargoyle. It a stone carving does not carry water and has a face that resembles a creature, it is technically called a grotesque. 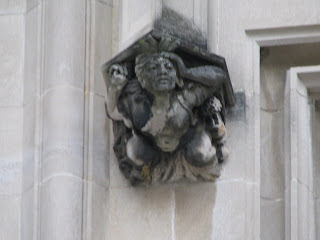 5. Many people believe that gargoyles were created by medieval architects and stone carvers to ward off evil in an imperfect world. 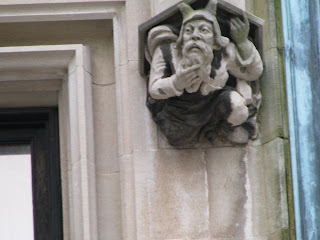 6. The creatures - gargoyles, grotesques, and chimeras - that decorate the façade of Biltmore House are fantastic, frightful, and fanciful. They lurk in virtually every nook and cranny from parapets, upper balconies and slither from the groins of the ornately arched windows. 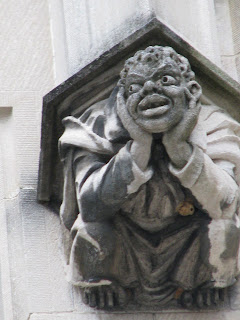 7. Why are they there? Richard Morris Hunt, the architect of Biltmore, took cues from the French renaissance and Gothic styles….The influence is evident in the proliferation of curious creatures that embellish it; gargoyles have been fixtures on the cathedrals, public buildings and grand homes of Europe for centuries. 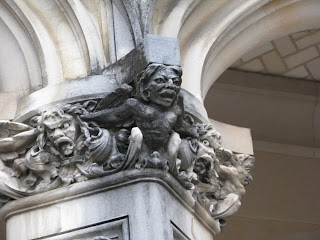 8. The masons of the Middle Ages expanded on this theme by introducing non-functional decorative elements depicting animals and humans in a grotesque (and often humorous) style, or letting their imaginations run wild with chimeras: mythical beasts that combined elements from various creatures. The gryphon, which has the body of a lion and the head and wings of an eagle, is a well-known example. 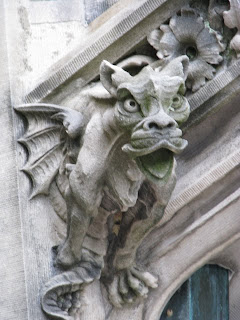 9. The monsters that adorn Biltmore House were actually dreamed up by Mr. Hunt’s architectural team. 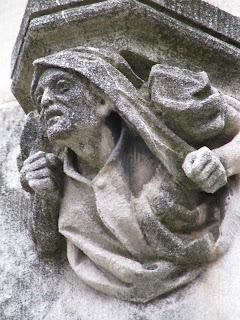 10. Plaster prototypes of each individual statue were provided to the project’s master stone carvers, who had been imported from major cities such as New York and Chicago. 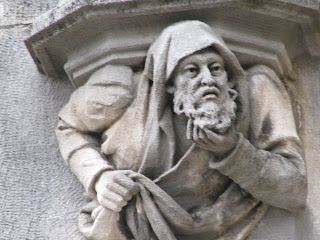 11. Working in a tent city set up for the construction crew on the estate’s esplanade, the carvers defined the basic contours of the Indian limestone sculptures on the ground, and they finessed the detail in place on the façade. 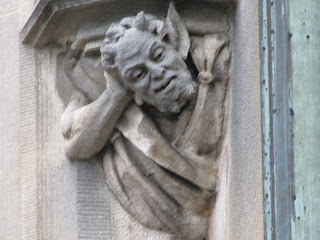 12. The home’s minor grotesques give us a glimpse of the individual style of the anonymous makers. 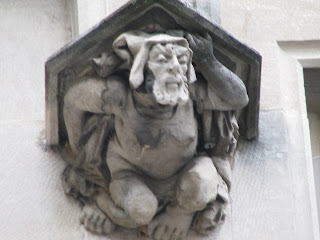 13. Major works, such as the two fearsome sentinels that overlook the main entrance, were executed to the architect’s specifications….. 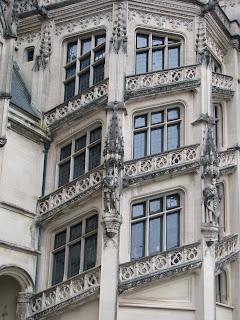 The text for this post was taken from this article and this article.
Other bloggers participate in Thursday Thirteen as well…..you can locate them here
Posted by EHT at Thursday, January 07, 2010

What a lovely idea for your 13 I hope you get a lot of hits on this one, the info was as fun as the pictures!

Great article. Thanks for not missing the details.