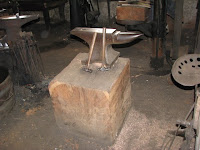 Vocabulary is key when teaching any subject from Math (integer….diameter….cotangent ) to Science (antimatter…circuit…velocity) from Language Arts (compound sentence…simile…alliteration) to Social Studies ( amendment…capital resources…inalienable). If students are unable to master and manipulate the subject’s vernacular they will encounter difficulty reading various texts, understanding their notes, and once April rolls around the student might not be able to understand the questions on the all important state mandated test.

Vocabulary acts as the foundation for each instructional unit. In fact, Marzano contends in his book Building Academic Vocabulary (2005), “…students in the 50th percentile in terms of ability to comprehend the subject matter taught in school, with no direct vocabulary instruction, scores in the 50th percentile ranking. The same student after specific content-area terms have been taught in a specific way, raises his/her comprehension ability to the 83rd percentile.”
Yes, specific content-area vocabulary instruction IS very important.
Once students begin to study the English colonies the vocabulary list takes on a who’s who of colonial founders and governors along with words like indigo, indentured, and apprentice, but tucked away within the list is a great word……the word artisan.
An artisan is someone who works with his or her hands to create a product. Prior to the Industrial Revolution artisans produced goods using creative thinking and took great pride in the products they produced. If they didn’t…well, their customer base would suffer, and they wouldn’t be very successful. Knowing the customer’s needs and keeping them happy with quality work was very important.
In fact, the work of the blacksmith was bespoken meaning he only worked at the request of others.

One type of colonial artisan I like to spotlight for students is the blacksmith, and the why behind my choice is very simple. Of all the craftsmen that came to the New World the blacksmith was the most important. In fact, other types of craftsmen couldn’t have done the things they did without the help of a blacksmith.
A blacksmith forges and shapes iron with an anvil and hammer. 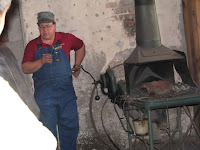 This article explains how the blacksmith makes the anvil sing an ancient hammer language. ”It’s a 50-part language that’s tapped out on the anvil….It’s the first thing an apprentice learns, because it’s the language that the master uses to converse with the strikers (helpers). The anvil makes a different sound depending upon where the hammer strikes. The apprentice knows where to hit the metal on the anvil based upon the “song” the master plays.” 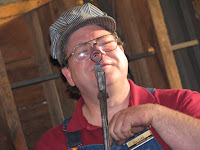 Not only is there a special language within the singing of the blacksmith’s hammer the color of the heated metal also has a language of its own. Since early blacksmiths had no thermometer to gauge the temperature of the heated metal they learned how to judge the color. The color provides the information they need to determine when the metal is ready to twist and turn. This is the main reason most blacksmith shops are dimly lit so that the blacksmith can see the fired metal.

Hmmmm….it would seem that the blacksmith has his own content-area vocabulary….language that involves two of his five senses including observation and hearing.
Over the New Year’s holiday I got the chance to see a true blacksmith in action at the Horseshoe Bend area of the Biltmore Estate. Doc W. Cudd, Jr. (seen in my pictures with this article) gave an excellent demonstration in his smithy shop, found in the property’s 1902 horse barn, that enthralled a crowd of young and old alike. He explained that over the last 450 years there has always been at least one blacksmith in his family. 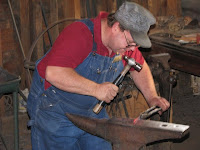 From this article I discovered that Doc Cudd received his first anvil at age 9, and began apprenticing under his dad and great uncle at age 10. After progressing to journeyman, he passed an intense test—just one portion took 18 hours—and became a blacksmith in 1995.

The article continues…."When people come see me at the barn, I always want them to feel like they're sitting on my front porch," he says. His rapport with guests is evident—he has a collection of 150 pictures that guests have sent him commemorating their River Bend Barn visit."
As I entered the smithy shop it was a tight fit as folks had stopped in and decided to stay awhile to listen to the demonstration. It is clear to this teacher that Mr. Cudd loves his profession and not only is he a master blacksmith, but he’s a master teacher as well. Passion is the true ingredient for any teacher …..and it is so very evident with Mr. Cudd.
Mr. Cudd puts the capital "A" in the word Artisan.
I witnessed Mr. Cudd creating one of his signature key rings….a key ring that is sold in the barn’s gift shop…..at the end of his demonstration he presented it and held it aloft so we could all see it. 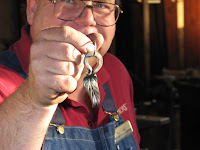 and yes, Mr. Elementaryhistoryteacher just had to have one.
We might just have to "throw-down" over who gets to carry it. 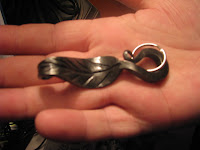 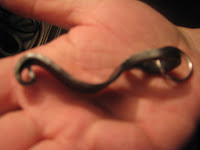 Resources:
The poem, The Village Blacksmith by Henry Wadsworth Longfellow can be found here
A video created in 1893 titled “Blacksmith Scene” can be found here. It was first kinetoscope shown in public exhibition and was created through the Thomas Edison Laboratory. The Library of Congress selected this video clip for preservation by the National Film Registry for being “culturally, historically, or aesthetically significant.”
A great little sample chapter regarding content-area vocabulary instruction can be found here, and a slide-show featuring Marzano’s findings regarding vocabulary instruction can be seen here
Posted by EHT at Monday, January 04, 2010