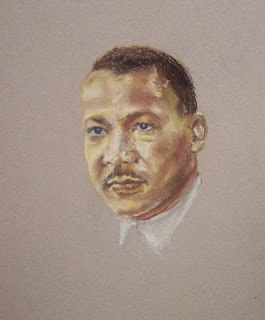 Isn’t this a great portrait of Dr King?

My friend, Tina Steele Lindsey created it to honor Dr. King for his birthday. You can view her artwork at her blog found here and website here.

I had been pondering all day yesterday regarding what I might post today for Dr. King’s birthday, and then I came across Tina’s portrait on Facebook as it rolled across my wall last night and some of the comments left there inspired me a bit.

The U2 song, (Pride) in the Name of Love was mentioned. Here are the lyrics:

One man caught on a barbed wire fence
One man he resist
One man washed on an empty beach.
One man betrayed with a kiss

Early morning, April 4
Shot rings out in the Memphis sky
Free at last, they took your life
They could not take your pride

Notice the song discusses two men…..Dr. King is one of them.

Originally, the intention behind the song was to make a few points regarding President Ronald Reagan and his pride regarding the military might of the United States.

However, the lead singer for U2, Bono, changed the intended focus for the song after reading Let the Trumpet Sound: A Life of Martin Luther King, Jr. by Stephen B. Oates as well as a biography of Malcom X.

Bono became fascinated by the opposite methods of fighting for civil rights…..the non-violent and violent….which is very clear from the lyrics.

One little correction needs to made with the song lyrics, however. The line “Early morning, April 4” referring to Dr. King’s death is incorrect since he was assassinated in the evening. It would be interesting to allow students to review the accounts of Dr. King’s death and then have them peruse the song lyrics to discover the error. Bono often corrects the lyrics when he sings the song live.

Unfortunately, critics panned all of the lyrics. Kurt Loder of Rolling Stone said, “’Pride’ gets over on the strength of its resounding beat and big, droning bass line not on the nobility of its lyrics which are unremarkable.”

In fact, even Bono stated…..”It’s just a load of vowel sounds ganging up on a great man.”

Well, that’s their opinions. I think the song is worthy to include with any lesson or unit of study regarding Dr. King….especially when we remember his birthday.

Here is a great video I found online at YouTube which combines actually footage and images of Dr. King along with other Civil Rights Era images with the U2 song as the background music:

And thanks again to my friend, Tina for her wonderful portrait.

Thank you so much for including my drawing of Dr. King in your wonderful post on this important day.

Excellent article, although I take exception to the critic's appraisal of the song lyrics. Many Russians view Dr. King as a hero.

You are very welcome, Tina.

Vassili, I believe I take exception as well. Thanks for visiting. I hope you return to History Is Elementary often in the future. I adore new readers. :)

I was a teenager when this song came out, and moved by the lyrics. Different original intention, a mistake in one fact? I didn't know any of that at the time. I thought it was a moving tribute for a great man.