A Christmas Mystery at the White House

As my regular readers know I contribute articles to American Presidents Blog and for that reason I became interested in researching and writing about the yearly White House Christmas card that have been sent out by each president since the 1950s when it became an official practice of each administration.

So, last month I once again began my search for the first card of the Obama administration. It’s been difficult to say the least, and I’ve found a little art mystery as well that has really challenged my research abilities.

First off….even several days into December the only image I could find was the a picture of the inside of the card showing the sentiment and signatures. I’ve posted it below. 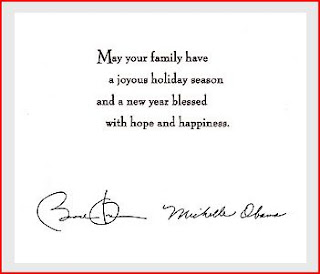 Of course, I’m a traditional kind of girl, so in keeping with tradition here at History Is Elementary you will have to follow me over to American Presidents to discover more about this past season’s card and the art mystery I discovered within the White House walls.
It truly astounds me that a painting has been so grossly misidentified.
Past articles of mine regarding the White House Christmas greetings can be found here, here, here, and I’m still looking for that original Wyeth painting that was used for the Nixon Christmas card from 1971. It’s also a mystery…..
Posted by EHT at Monday, January 11, 2010

I gave you a shout out on my blog today about your fabulous study guide!