Try out your knowledge of history by taking a quiz here. I reaffirmed myself by earning a 100.

My seventh grader received a digital camera from her generous aunt for Christmas. She loves it. She used up the batteries in 5 hours the first night she used it. Finally her darling daddy went out and bought her rechargeable batteries----we decided it would be cheaper in the long run. As of today she has amassed many pictures, figured out how to store them on her own, and has downloaded them to the myspace site we allow her to keep.

This is a self portrait with three of her friends. 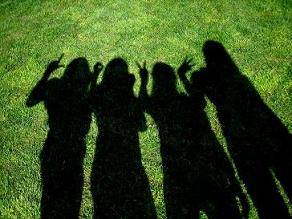 I love how she took a picture of their shadows. Notice how the girls have spelled “love” with their fingers. Young folks can be so creative when you just let them be.

This morning on CNN I saw an interview with a woman who was telling parents to not allow their teens to have a Myspace site or any other type of website. I agree for 90% of those out there. I have seen several of the sites my former students maintain. Oh my gosh….the language, the pictures, the information they so freely put out there. We have also had a problem in my school district with students slamming each other on their sites. I blame parents for this. So many kids are online with no controls whatsoever. Are we surprised? Most children watch television constantly----the only control they have is the remote control. We visit my daughter’s site constantly, her 20 year old brother and his friends visit her site constantly, and her grandparents have visited her site. If there is anything questionable we see it. The computer she uses is in the family room----not in her room. From time to time I have had to tell her to take down a picture or delete some content, but for the most part it has been ok. She has her site blocked and no one can send her a message unless they are on her approved list.

The great thing about these sites is the communication they can provide. When I graduated high school I lost touch with so many people. We split up into hundreds of different paths and over the years we lost touch. My son was a member of a great group of friends in high school. They are still in touch----three years later----sometimes daily through their emails and Xanga sites. They can support each other when they have had a bad day and applaud their accomplishments.

Though I have visited the sites of some of my former students I would never contact them through their sites. It’s just too risky to be accused of something. I have had former students email me through my school email address and I always answer them, but I also always print out their message and my reply and keep it in a file. Gee...that's kind of sad that I have to constantly think about liability issues, but educators really do have to think through every situation. I don't want to be the lead story on the 5 o'clock news.

Now here’s a student any teacher would be proud to have….. 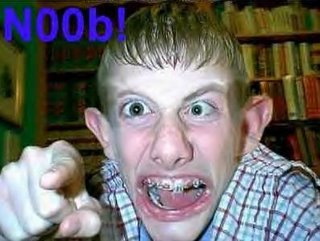 I have no idea who this is. I just wanted to depict an average student on my post so that non-educators out there would see what they are missing every day.
Posted by EHT at Saturday, February 25, 2006

haha! I know what you mean. I save all messages from students and yes it is unbelievable what they say and do. The notes I take up are highly "educational" sometimes!

Thanks for dropping by my history place...the other site I maintain for fun.