The Only Thing We Have to Fear Is Fear Itself 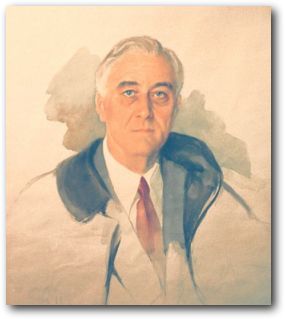 The following question recently appeared in the Atlanta local paper.

Should January 30th be declared Franklin Delano Roosevelt day in Georgia? FDR guided the country through the Great Depression and World War II, and he brought the country Social Security and several social welfare programs. He put Warm Springs, Georgia on the national map, visiting there for two decades to treat his polio and building the Little White House, where he died in 1945. However, a Republican lawmaker wants to stall a FDR memorial bill because the president had an affair with his wife’s social secretary. So, should the [Georgia] General Assembly pass a bill honoring FDR, or should they kill it because of the affair?

There was quite a range to the responses that readers submitted. Some were simply idiotic and off topic. Here are some that managed to stick to the topic:

Pro Comments-
*FDR saw us through two very traumatic eras---the Great Depression and World War II
*Citizens sought to elect him not once, not twice, not three times, but an amazing four times. Penalizing a great man for an affair in this day and age is unacceptable when so many of our other great leaders have had their morality questioned.

Con Comments-
*FDR started the socialist movement and a dependence on government that continues today.
*FDR was a socialist. May Day would be the appropriate day to honor him.
*FDR damaged this country’s principals of individual liberty and limited government
*FDR cost many lives along the Ardennes and the Rhine with his comment about “unconditional surrender” at Casablanca without the agreement of his allies
*FDR was the epitome of big government and the mindset still exists today
*FDR left us with a Social Security system that is inefficient and allows politicians to buy votes
*FDR had an affair

So….here’s my take on the matter.

In her book This Is Georgia, published in 1968, by Bernice McCullar she devotes several pages to FDR and his impact on the state of Georgia. McCullar refers to the years from the 1929 Crash to 1958 (five years after FDR’s death) as “The Roosevelt Impact”. FDR first came to Warm Springs, Georgia in 1924 when the owner of the springs, Foster Peabody, wrote to him about the curative powers of the waters. The website for the Little White House states:

Enchanted with the area, he built a vacation cottage on the side of Pine Mountain while running for president in 1932. During his trips to Georgia, he spent many hours visiting neighbors and learning of their difficulties, especially during the Great Depression

Visits [at the Little White House] were amongst the happiest times of Roosevelt's life. From the moment he was greeted by the villagers as he stepped down the ramp of his special train at the tiny Warm Springs station, until he drove himself, followed by Secret Service men, in his blue automobile with the specially-constructed hand controls for a last look at Shiloh Valley from the top of Pine Mountain, …he was that man from Hyde Park, seeking strength and health and happiness.

The Georgia FDR first saw was dirt poor and backward. There weren’t many opportunities for Georgians back then whether they were black or white. Georgia was primarily a rural state in the mid to late 20’s. Most rural roads were still dirt, telephone lines did not exist outside of major towns, and rural areas were dark at night. Most houses including my grandparents had no inside bathroom and no running water. If they didn’t grow it, they didn’t eat it.

Two years into the Great Depression FDR received 22,821,857 votes for president to Hoover’s 15, 751,443 votes. The voter turnout in Georgia was the highest recorded to date during a presidential election. During the campaign FDR spoke at Oglethorpe University located just outside of Atlanta and said, “This country needs bold, persistent experimentation. It is common sense to take a method and try it; if it fails, admit it frankly, and try another. But above all, try something!”

Also from the Little White House:

Some of the most far-reaching policies of the New Deal were actually formed in the Little White House. The ideas for the National Bank Holiday and the Rural Electrification Administration both had their inceptions in its rooms. As well, the bill for creating the REA was signed here. Many techniques for improving livestock breeding, crop rotation and reforestation were developed and demonstrated near Roosevelt's Little White House. The Civilian Conservation Corps, "the CCC" as it was called, employed many a young local man during the Depression-weary years.

Many older, native Georgians seventy years old and older remember their Georgia during the Depression. They can remember their parents and grandparents remarking on FDR and how his innovative programs helped Georgia in particular. For that reason many Georgians during those times have continued to remember FDR and they are what I call “FDR Democrats”. Simply based on the fact that FDR was a friend to Georgia before and during his presidency many native Georgians have voted Democrat since and will continue to do so until they die. My father is one of them. He is a conservative at heart but his loyalty to his father’s “Mr. Roosevelt” is undeniable.

Beset by serious problems from 1920 on, the Great Depression only made the plight of the farmer worse. Falling cotton and tobacco prices, reductions in workforce thanks to the competition from cities, and poor land-use strategies wrecked havoc on the sector that had supported the Georgia economy since the time of Oglethorpe. These three things combined to chase Georgians from the fields in record numbers. At the end of the ten-year period ending in 1940, less than one-third of all Georgia workers were employed in agriculture.

The website for the Carl Vinson History Project confirms:

While visiting Warm Springs Roosevelt was invited to speak before the chamber of commerce of Americus and Sumter County. He used the occasion to praise the "blossoming spirit" of his second home, and also pushed his idea of using otherwise unproductive land to grow trees:

"In Georgia the movement towards the cities is growing by leaps and bounds and this means the abandonment of the farms or those farms that are not suited to the uses of agriculture. It means that we will have vacant lands but these can and should be used in growing timber." (16)

My grandfather was one of the Georgia farmers who began working in a factory instead of making his living by full time farming. He was employed for a time at the old Bell Bomber plant that today is known as Lockheed Martin. His farm lay idle and stands of timber were eventually harvested from his 100 acres. The land still lies dormant and from time to time timber is still harvested.

The programs Roosevelt initiated helped the country get through the Depression. They helped people feel better because something was getting done. In reality though, the war is what got us out the depression. FDR should not be held to blame concerning big government, social security, and other entitlement programs. They were necessary at the time. The alphabet government got people to work, and got electricity and decent roads to people who needed it.

The incompetence here is not FDR’s. It belongs to the politicians of all parties who have come after him for allowing big government to remain and for allowing social security to continue without an overhaul. I will admit that the continued use of his social programs after the end of the Depression has gotten us into a fix. People now feel it is their right to have a check from the government at age 65, and unfortunately, many Americans are poorly educated about saving for their future. They feel that their “government check” will be all they need. You cannot make me understand how a government is NOT weak when its citizens must depend on the government for their livelihood or when citizens must hold out their hands once a month to have a meager reimbursement in installment payments. Social Security needs reform and it needs it more than my classroom.

The premise for denying FDR a state holiday is based only on immorality. Deny FDR a state holiday based simply on an affair? If we started using morality as a basis for memorials and state holidays we would have to dismantle the Washington Monument and the Jefferson Memorial as both presidents owned slaves. Dr. King is rumored to have been unfaithful to his wife. Cancel his day? Extinguish the flame on JFK’s grave? I think not.

In 1938, the Georgia State College for Women in Milledgeville celebrated its first 100 years. They began a campaign to collect programs and papers that could be read at the 200th anniversary of the school in 2038. Dr. Guy Wells, the president of the college, wrote a letter to the person who would be the future college president. In that letter he wrote,

“We have an American president named Franklin Delano Roosevelt.
Some consider him to be our greatest president; others consider
him a demagogue. By the time you are here, history will have decided.”
(This Is Georgia, McCullar)

Well, we have 32 years to argue I guess…

Another drawback against an official state day is that FDR locked up thousands of innocent American citizens if Japanese descent during the war.

Yes, Japanese internment was certainly a dark spot on the American picture. FDR was our president for so many years he would have many entries in the pro and con columns. My main reason, however, for posting on this topic was to vent about the uneducated responses to the question posed in the Atlanta Journal. So many of our citizens are not from Georgia and they are woefully uninformed on how his policies during the 30s helped to drag Georgia into the 20th century. Thanks for the complement and I will contact you privately by email!

Very nice! I found a place where you can
make some nice extra cash secret shopping. Just go to the site below
and put in your zip to see what's available in your area.
I made over $900 last month having fun!

I think there are entirely too many holidays and after a while, they just become reasons for sales and shopping.