The Star Spangled Banner---Why It Should Be Our Anthem 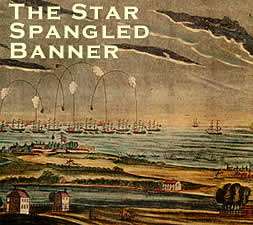 As I admitted yesterday I have thought about several things to post about but actually coaching the ideas from my brain and onto the computer screen has been difficult. In recent days there have been large amounts of press concerning the altered national anthem. I understand that a word for word translation might be difficult to do, but the new translation simply alters the original meaning of the song. The song gets a bad enough rap as it is without changing the meaning behind it. Many people complain that it is hard to sing and the tune was originally a drinking song.

I think the reason many Americans have a hard time with the Star Spangled Banner is they simply don’t understand the history behind the song. Some of our fourth grades have been researching the history behind the Star Spangled Banner getting ready for a PTSO presentation for May 9th. When we discussed the War of 1812 this week that particular group was really excited since they were already aware of many of the details, so I sat back and let them teach the others, and then I filled in the gaps.

I believe if Americans truly understood the significance of this song and could feel the same emotion Francis Scott Key felt as he wrote the poem they would appreciate the song so much more. Ms. Cornelius has beaten me to the punch and posted an excellent review of the War of 1812, so I won’t relive those exciting details here.

Let’s put some things in perspective though. The U.S. was a new nation-----less than thirty years old, and Great Britain was still slapping it around. They would have loved to take over their former colonies which had now grown to include the Northwest frontier and the Louisiana Purchase. Many could argue that the War Hawks from the south and west pushed Madison into declaring war but once he did there was no turning back.

After burning the White House, the Capitol, and other Washington buildings the British sailed on up the Chesapeake Bay towards Baltimore. The British tried to take Baltimore by land battle but failed, which led to the inevitable bombardment of the fort.

Francis Scott Key was a Baltimore lawyer who was actually against the war. He became involved in the bombardment of Ft. McHenry as he attempted to win the release of an American doctor, William Beanes, who was being held on a British ship. Key was successful but found he was unable to leave the British ship as the bombardment had begun. As I told my students….imagine the horror of being caught with the enemy as your side begins to fire upon you. Imagine the fears of the people of Baltimore as they watched and waited all night through the bombardment hoping with each flash of the bombs that they would still see the flag over the fort.

The gigantic flag that Lt. Col. George Armistead had hired Mary Pickersgill to create had served a purpose. Armistead wanted a flag so large that the British would make no mistake as to where the fort was and Armistead wanted the people of Baltimore to know that the Americans were still in control of the fort throughout the battle. Ms. Pickersgill had to use the floor of a brewery to work on the flag that measured 30 x 42 feet. Each star on the flag is two feet across. For her work, much of it done on her knees, Ms. Pickersgill was paid $405.90.

The poem that Key wrote expresses his fears through the night as he witnessed the bombardment. His words also express the joy that all of the citizens felt as dawn arrived and the flag was still there.

So why should we care today? I allowed my kids to volunteer answers and they were all pretty good, but here’s what I told them….The War of 1812 was a defining moment in time for our country. It was our first test. Did we have what it takes to come together and face an invasion? The surge of nationalism that erupted after Ft. McHenry and the following Battle of New Orleans (actually fought after the peace treaty had been signed) cemented the United States as a country----not a loose collection of states. Of course, it wouldn’t be our only test…the Civil War would serve that purpose, but the pride and confidence that the United States gained led to the issuance of the Monroe Doctrine. This placed Europe on notice that they were through in North America, and that we would take notice of any further involvement in the Carribean and South America.

The American Revolution did not make us a country. It only gained our independence from Britain. What made us a country was the War of 1812, and every American should remember this each and every time they relive the emotion that Francis Scott Key transmits to us through his stirring words. At this point in my lesson we all stood and sang our national anthem, and this time the kids sang it with pride, dignity and a better understanding...as Americans.

Visit Bookmoth and reread the words to the Star Spangled Banner with new or reminded understanding, and to those who want to mess with MY anthem…don’t.

UPDATE: 5-8-06 Check out an article at History News Network that has additional historical information on this topic. The authors have made some very good points. They also linked to this very post that you are reading. Check out the comments on their page for my response.
Posted by EHT at Sunday, May 07, 2006

Well, that's about the best defense of that song that I've ever read.

I don't know, though, if a song that needs that much contextualization really deserves the title of "anthem"....

Awwww c'mon ahistoricality...you know I'm a bit wordy. This stems from my past career as a paralegal. You have to be wordy on those legal briefs.

But who do you know who can hit those high notes?

I agree with ahistoricality. An anthem should need no explanation.

And an anthem should be accessible to everyone, not just those who've been through voice-training...

I think its a shame that Americans have to reminded about the history behind the Star Spangled Banner too. Whose fault is that? History teachers? I mean...the War of 1812 is called our forgotten war, but I think it it one of our most important moments on the world stage. Maybe most Americans just need to get a little more in touch with the reasons why we do certain things. I think it is one of our responsibilities as a citizen. And let's face it....there are many people who wouldn't sing the national anthem no matter the tune, the words, or the music. History shows our anthem is accessible to everyone...read the article I link to at HNN. There's more musical versions than you can shake a spoon at.

Yeah, it is difficult to understand some of the words...ramparts?... perilous? as a young or less literate person, but the message of the song is the important part.

I don't know anything past the first verse. I don't know much about the war of 1812. I don't know what it is like to be caught on an enemy ship in the midst of battle. I have never lost a friend to war.

But I lived during the time of 9/11. I have befriended people from non-Democratic countries. I have figured out how damn lucky I am to live in the United States.

I am proud to stand for the flag at parades. I am proud of the come back of our country after 9/11. I am proud to live in the "land of the free and the home of the brave".

I don't know need to know the exact why for Key's poem, cause I know the pride he had for his home, his country, his people.

Last fall at our local storytelling festival Teresa Clark, a national storyteller, told about the battle at Ft. McHenry. It was awesome. We bought her CD. When I read this post, I thought you may be interested. I think your 4th graders would enjoy it, too. The CD is The Tapestry of Life by Teresa Clark, Woodlore Productions, 2001. Her email address is tclark@mstar2.net.

Thanks for the tip, Booklogged. I'll add it to my notes for my War of 1812 unit!

Hi, I love your blog and this post! Very nicely done. I wanted to let you know that I am posting a link to this on my blog. I am doing a little patriotic post and this fits in nicely.

Thanks! My daughter is just becoming old enough to understand simple explanations about history. I'll be coming back often during her school years.

As for ahistoricality's comments - the only reason a wordy explanation of the song is needed is that so many people never learned any history.