13 Things About the Zoot Suit Riots

Here in my fair city of Atlanta there has been talk within the city council regarding young men and their underwear. Seems the young ones like to wear their pants hanging about their knees for some reason. I’m not particularly fond of the style myself. For one thing I simply don’t understand how someone can demand respect from me when they are attempting to walk towards me holding their pants up with one hand to keep them from puddling around their feet. It’s hilarious. Over the years though American youth have had their fads and fashion trends including the Flappers of the 20s and the Greasers of the 50s…….and then there were the Zoot Suits.

1. Zoot suits were popular among Hispanics, African Americans, and Italians during the 1930s and 1940s.

2. They were mainly worn for special occasions. The suit consisted of high-waisted, wide-legged, tight-cuffed pants paired with a long coat called a carlango that sported wide lapels and high padded shoulders. Sometimes a hat completed the look that contained a long feather. Sometimes a watch chain dangled from the belt to the knees and then looped back to a side pocket.

3. Just as many consider saggy pants to be a symbol of youth rebellion today the zoot suit was that same symbol in the 30s and 40s.

4. The zoot suit was first seen in the 1930s in New York at the height of the Harlem Jazz culture. Many referred to them as “drapes.”

5. In the summer of 1943 tensions were running high between Chicano youths and U.S. Servicemen stationed in Los Angeles

6. During their off duty periods and after they had been out for a night of drinking sailors and soldiers had to walk through Chicano neighborhoods in order to return to their bases.

7. Some of the interactions moved beyond name calling and erupted in brawls and robberies.

8. It didn’t help that the LA Police Department was also attempting to clean up street corners in Chicano neighborhoods where young men loitered and many participated in illegal street gambling.

9. Prior to the riots in October 1942, a young man was killed during a fracas between two rival Chicano gangs. Over 600 young men were arrested, however, convictions were later overturned. 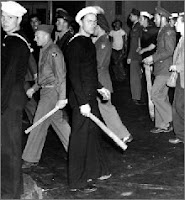 11. Attacks and retaliation attacks continued in May, 1943. As U.S. Servicemen headed out to “get back at” the Chicanos those wearing zoot suits were easy to identify and they bore the brunt of the attacks. While many zoot suiters were arrested and processed throught the LA justice system the servicemen were handed over to the military police and were often let go.

12. As the days passed historical records show that thousands of servicemen joined the attacks. African Americans were involved as well as they took the side of the Chicano community providing vehicles and weapons to fight against the servicemen.

13. An eyewitness account helps to give an image of the attacks: Marching through the streets of downtown Los Angeles, a mob of several thousand soldiers, sailors, and civilians, proceeded to beat up every zoot suiter they could find. Pushing its way into the important motion picture theaters, the mob ordered the management to turn on the house lights and then ran up and down the aisles dragging Mexicans out of their seats. Streetcars were halted while Mexicans, and some Filipinos and Negroes, were jerked off their seats, pushed into the streets and beaten with a sadistic frenzy.

After several days the military intervened. Local press printed stories lauding the servicemen stating their attacks had rid the community of hoodlums and miscreants. Luckily the military designated downtown LA offlimits to servicemen in the future. Very few charges were leveled at the servicemen and the charges that were made quickly went away. When First Lady Eleanor Roosevelt spoke out against the riots stating that long term racial discrimination against Hispanics led to the problems she was accused of attempting to create more racial discord.

….and we thing these types of things only happen today.

Visit the main page for Thurday Thirteen here
Posted by EHT at Thursday, May 08, 2008

Great list! I learned something. I only knew about the riots because of the song: "Zoot Suit Riot: by the Cherry Poppin Daddies which played during the Swing resurgence in the 90s.

I always learn from you! I knew about zoot suits, but I didn't remember the riots. Happy TT.

I always learn from you!

Wonderful list. I learned something today. I hadn't heard of the zoot suit riots. Thank you.

Interesting! Learned something new today!! Thanks!

I find some comfort in studying events in our history...yes, it could be depressing to look at it as lessons not learned, but at least knowing that we've survived it before gives me reason to believe we will again!

Not Afraid to Use It said...

Very interesting! Like you said, it's all been done before.

thanks for sharing this with us! I think I incorporated this into the culture of America when I taught US history a few years ago. Thanks for reminding me of this.