1. Andrew Carnegie was a originally from Scotland, but made millions in America from the steel industry during the late 1800s.

2. He used his millions for philanthropy and education funding institutions such as Carnegie Mellon University in Pittsburgh, Pennsylvania and many other worthwhile endeavors.

3. Last year Forbes estimated his fortune at $298.3 BILLION dollars based on 2007 dollars. Carnegie's best known quote regarding his wealth was something along the lines that he spent the first half of his life making his fortune, and the second half giving it all away. 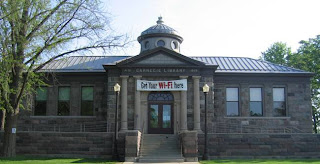 4. Like any historical figure there are some aspects of his life that bear scrutiny. Carnegie has been classified as a robber baron and rightly so, but his philanthropic efforts should be recognized as well.

5. More than 2,500 libraries were built with Carnegie’s money from locations in the United States, Europe, and even Fiji.

6. U.S. towns that were lucky enough to snag the funds for a Carnegie library were given the gift of great architecture and access to great books. Generally, each library was unique to its local with regard to design. Many styles include the Beaux-Arts, Italian Renaissance, Baroque, Classical Revivial, and Spanish Colonial. 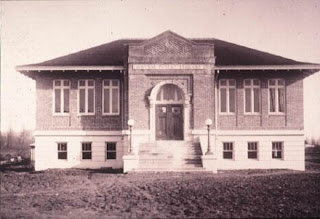 7. Each community was able to choose their own style and had contol over the building, however, there are many features to each and every library that became commonplace. Most of the Carnegie libraries were entered via a main entrance with a staircase symbolizing the person’s choice to elevate by learning. A lampost could also be found outside most libraries symbolizing enlightenment.

8. Why libraries? Carnegie could have given his money for many worthwhile causes, and he did, but libraries and the love of reading remained at the top of the philanthropist’s list. This is mainly due to his own experiences as an immigrant. He credited books and his self-education as one of the ingredients to his success in business.

9. Carnegie’s name rarely appeared on the libraries, but there were usually other mottos and sayings carved into the buildings. Most of the doorways were topped with the saying, “Let there be light.” 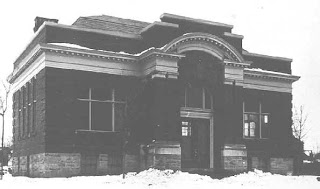 10. “The Carnegie Forumla” was the foundation most of the libraries were built upon. The formula applied for each library grant stated each community had to demonstrate their need for a public library, they had to provide the building site, and the town had to anually provide ten percent of the cost of the library’s construction to support its operation (at the time this was generally $2.00 per person residing in the community).

11. There were some U.S. communities that actually refused to ask Carnegie for a library grant even though they were rarely refused. This was due to the many questionable business practices and his status as a Robber Baron.

12. Don’t you just love wandering around a library? It didn’t used to be that way. The stacks were closed and you had to have a topic in mind in order to get your hands on a book since the librarian was the one who removed books from the shelves. Carnegie libraries stopped this practice. The stacks were open and patrons were free to explore. 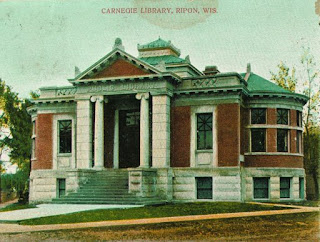 13. Today many Carnegie libraries are gone forever to the wrecking ball, but many other locations are still operating libraries or have been converted to museums, community centers, office buildings, and some are even residences.

Over at Georgia on My Mind I’ve posted references to two of Atlanta’s Carnegie libraries. One is gone forever, yet a part of it will remain part of the landscape for some time to come. Another location is no longer a library…..Today, its unique use fits into the Atlanta neighborhood that passionately claims it.

The above pictures are all various Carnegie libraries.

Great resources to learn more about Carnegie libraries can be found here, here, and here.
You can find more bloggers participating in Thursday Thirteen here
Posted by EHT at Thursday, June 26, 2008

As a Pittsburgh girl, I thoroughly enjoyed this list!

I went to Smith College (in MA) and it wasn't until my last year there that I saw a plaque in our main library that said that the library was a Carnegie library! They really are everywhere!

I remember reading about Carnegie libraries in history class. It was a fascinating topic for a book lover. Thanks for the information.

I wish he would've given one of those libraries to me! (Just kidding, of course.) I always find your posts so fascinating; I come away having learned something new every time. Isn't it good he was also a philanthropist to some degree? I just heard of a couple who, rather than having a wedding reception, spent the money they would have spent on themselves buying food and feeding the homeless. They put on aprons reading "Bride" and "Groom" and invited their guests to help them serve. That would be a wedding I'd never forget; I wish I would have thought of it myself.

My Dad's hometown had a Carnegie library. The original building was still standing the last time I was down that way.

Remember, his theory was that his squeezing of his workers was justified since he would then be able to spend his amalgamated wealth for their benefit far better than they would have as individuals.